Five Years On: What Happened to the Arab Revolution? 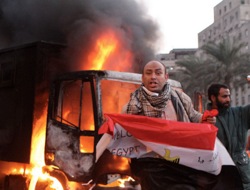 If you agree with our analysis, please consider supporting our campaign to acquire office space in NYC to strengthen our national center!

Five years ago, without any organization, program, plan, or preparation, the Arab masses, in the words of Marx, stormed heaven.  They brought down, in a matter of weeks, what had seemingly not moved an inch in decades of petitioning by NGOs and academic do-gooders. The colossal state apparatus, employing hundreds of thousands of spies, police officers, and army personnel, could only watch as the masses took over the streets.

We should remind all those who today weep over the “low level of consciousness” of the masses, that the revolution at all stages was propelled by the workers, the youth, the poor, and oppressed people who took their destinies into their own hands. Meanwhile, all the so-called “expert commentators,” professional politicians, and other charlatans were in a state of shock and terror in the face of this movement of the “mob.”

Nevertheless, five years on, the situation in the region is in stark contrast to the optimism, hope, and spirit of struggle that characterized the first days of the revolution. Why has this come about?

As these lines are being written, the city of Kasserine in Tunisia is witnessing its fifth day of protests after an unemployed youth committed suicide two days ago. Fourteen people have been injured so far, with the army on the streets and a curfew declared. The protests have spread to three other towns in Southern Tunisia as the youth are demanding jobs.

Although the immediate spark of the 2011 movement in Tunisia was the tragic self-immolation of Mohamed Bouazizi, the real reasons behind the sweeping revolution were years of injustice, humiliation, insecurity, and poverty. In contrast to the enormous wealth of the dictators, forty percent of the people in the Arab world lived on less than $2 a day. Youth unemployment was about forty percent and in some regions up to eighty percent. 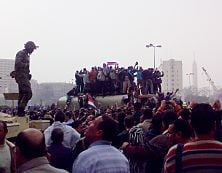 Five years after the overthrow of Zine El-Abedine Ben Ali in Tunisia, nothing has been solved. Unemployment, far from having fallen, has gone from 12 to 15.3%—officially! In Kasserine it remains above thirty percent. Although some democratic rights have been secured, this is of little comfort to people struggling to survive. As one protester told AP last week, “Freedom is nice, but I cannot feed my family with it.”

The situation is similar in Egypt, where unemployment is 12.7%—above 2011 levels. Here, the so-called “revolutionary” Sisi regime is preparing to celebrate the anniversary of the revolution by rounding up activists and banning protests. Meanwhile, Sisi is preparing to free the deposed dictator Hosni Mubarak.

At the same time, in Syria, Iraq, Yemen, and Libya, the initial popular protests have given way to barbaric civil wars which have de facto broken up these states into warring opposed factions.

In this context, it is understandable that some pessimism may be gripping those who look at the situation from afar. For Marxists, the point is not to weep or despair, but first and foremost to understand the factors that have led to the present situation.

While the spontaneity of the masses has its strong points and reveals their enormous potential power, it would also be wrong to romanticize it. It was precisely the unprepared nature of the uprisings which also proved to be their biggest undoing.

Overthrowing a dictatorial head of state can be the beginning of revolution, but if it stops there, all the immense energy of the masses can eventually be dissipated. The Egyptian masses have learned this through painful experience. Since 2011, they have staged four uprisings, overthrown three presidents and four prime ministers, yet not much has changed in their everyday lives. On June 30, 2013, 14 million Egyptians took to the street in what was probably—at least in relative terms—the largest protest in human history.

What more could one demand of the Egyptian masses? They showed every willingness to struggle and had power in their hands on several occasions. One of the leaders behind the June 30th [2013] movement told The Guardian, “. . . After [General Abdel Fatah al-] Sisi made his 48-hour ultimatum, we had a meeting straight afterwards. I was worried because I thought it might be an attempt by the army to ride the wave, and to take an advantage from the situation—and to take power for themselves. But I also thought that if there was a coup, then Sisi would himself face a backlash within the military itself. I’ve studied in military college, and a lot of my former colleagues assured me in recent weeks that they would support us . . .” (The Guardian, July 6, 2013)

Had the ruling class chosen to use the army against the revolution, it would have broken along class lines. Thus, it was at the mercy of the revolution. Not knowing what to do with this power, however, the leaders of the movement handed it back to the military led by Abdel Fattah el-Sisi. Sisi posed as defender of the revolution in order to hijack it, but in fact he is—just like Mohamed Morsi before him—a representative of the Egyptian ruling class, albeit a different wing which controls between twenty-five and forty percent of the economy.

By handing power to Sisi, the ruling class was given an opportunity to reorganize its forces. At the same time, Sisi was given revolutionary authority in the eyes of the masses, which he temporarily strengthened by cracking down on the hated Muslim Brotherhood.

Today, after years of struggle, an element of tiredness is present amongst the masses, and the movement is at an ebb. Sisi has been trying to use this to crack down on the revolution. Under the guise of the anti-Brotherhood campaign he has arrested thousands of revolutionary youth and some working class activists.

Syria proved to be the weakest link in the Arab Revolution. The movement in Syria was, in a sense, premature. Without an impulse from the revolutionary movements in the region (Tunisia, Egypt . . .) it would probably have been delayed some years. The Assad regime had only recently started moving towards capitalism, away from the previously nationalized planned economy. Thus, it still had certain reserves of support among sections of the urban population and the working class. The gains of the past—a certain welfare system, high cultural level due to free education, etc.—these were beginning to be slowly whittled away, but the process was still in its early stages.

That explains why the vague democratic calls of the revolutionary youth did not gain a sufficient echo among the working class as a whole. Witnessing the rapid fall of Mubarak and ben Ali, the Syrian revolutionary youth believed that through mass street protests they could achieve the same. When this failed, after seeing the fall of Gaddafi, with help from Western military intervention, they believed the same could happen in Syria. This isolated the movement further from the workers, who knew perfectly well what kind of “democracy” Western intervention would bring. The lack of working class participation was the main difference between the revolutions in Tunisia and Egypt, and also the main reason why the outcomes were different.

Having stalled on the political front, the movement turned in the direction of the “armed struggle”; but in a revolution, if this is not linked to the organized working class, this can turn out to be fatal. In a solely military confrontation, without the full backing of the urban working class, the revolution will always be the weaker party. Having gone down this road, the movement became vulnerable and drifted into the control of foreign imperialist powers.

The CIA, along with other Western and Middle Eastern states, saw an opportunity to intervene and pumped billions of dollars towards promoting reactionary groups, who were the only ones whose interests aligned with those of the imperialists. The Islamist degeneration of the movement also strengthened Assad amongst the mainly secular population. The only issue Assad, the US, and its allies could agree on was the need to eliminate the revolutionary elements.

As intended, this bloody defeat in Syria (and Libya, which is a similar process) and the spiralling bloodbath have acted as a break on many movements in the region. Many people began to draw the conclusion that “revolution” only produces chaos and barbarism.

A question of leadership

The fact is that the revolution in Egypt and Tunisia stopped halfway and stalled. This allowed reactionary forces to derail the movement and push towards counterrevolution. In Egypt, this meant leaving intact the state apparatus, with the economy remaining in the hands of the old ruling class. In Syria, the opposition limited itself to calling for democratic rights, but on economic and social questions they stood for privatization and cuts in welfare. They had the same program as Assad, only sped up!

In both cases, the leaders of the movement thought that “moderation” was the best way to achieve a wider movement. What they achieved, however, was to allow room for the counterrevolution to maneuver, with tragic consequences. A similar situation developed throughout the region. Thus, the movement is now at an ebb. But none of the socio-economic problems that were at the root of the revolutionary upheavals have been solved. 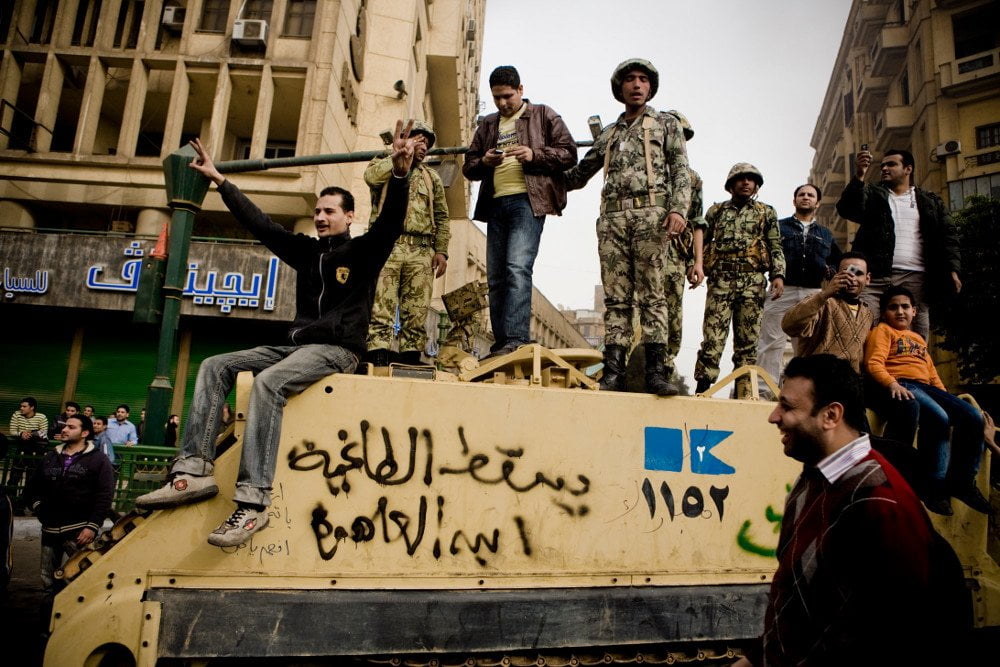 In Egypt, the Sisi dictatorship is extremely weak, only held up by the fact that the masses are tired and disoriented after years of struggle. But the Egyptian Revolution has not been defeated in open struggle. The masses remember how they brought down four governments in three years. In fact, as an anticipation of what is to come in the future, they brought down Al Sisi’s first government in the spring of 2014. Sooner or later, this force will rise again.

As long as the revolution is retreating, the ugly face of reaction will dominate the agenda. However, under the surface of apparent calm, the same contradictions which led to revolution are still at work. In countries like Syria and Libya the revolution has been pushed very far back. However, in Egypt, Turkey, and Iran, where the working class is strong, new movements are already being prepared. The key is to begin the building of a leadership which can intervene in these movements, so as not to make the same mistakes as in the past.

In spite of everything, capitalism has not solved any of the problems facing the Arab and Middle Eastern masses. In fact, things have worsened. The struggle against injustice, poverty, and barbarism will inevitably be revived. But it can only win by overthrowing this rotten capitalist system, which is the root cause of all the problems.