Health Care in the United States is SiCKO 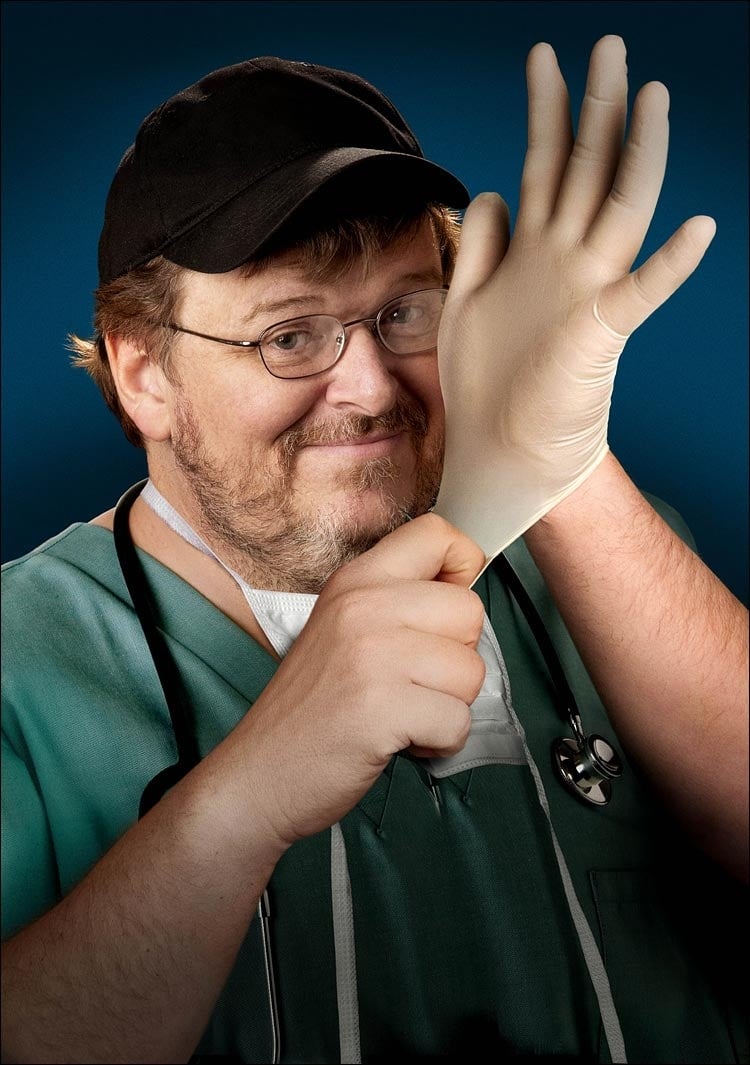 “You would have to be dead to be unaffected by Moore ‘s movie…” – Barclay Fitzpatrick, VP of Corporate Communications for Capital BlueCross, in a leaked internal memo

Michael Moore’s latest film, SiCKO, is from beginning to end an all-out assault on the for-profit U.S. health care system. Most of us have heard of the 47 million Americans, including 10 million children, without health insurance, a number that has been steadily rising ov

But Moore clearly states in the opening minutes of the film that SiCKO isn’t about them.  The focus of the movie is on the nearly 250 million Americans who are insured.  He focuses on how the health industry in the U.S. is set up not to provide, but rather to deny care.   As a former “denial management specialist” says in the film, “It’s not unintentional.  It’s not a mistake.  It’s not an oversight. You’re not slipping through the cracks. Somebody made that crack and swept you towards it, and the intent is to maximize profit.”

Various cases are dealt with, some tragically humorous, some outright disturbing.   A man whose fingers were cut off while working on a table saw is forced to choose which finger he can afford to reattach.  A woman is made to pay thousands of dollars after a car accident, because her ambulance trip wasn’t “pre-approved”.   In one of the more moving sequences, a woman speaks about her husband, who was denied a bone marrow transplant that could have saved his life – even though a perfectly-matched donor for the transplant was available.  The system is clearly broken.

One thing that makes this film superior to anything that Moore has done in the past is that, for once, there is a clearly defined goal presented:  universal health care.  After showing us how exactly the swindle that is the U.S. health care system operates, Moore turns his attention to the socialized systems in Canada, Britain, France, and Cuba, dealing quite humorously with the “boogeyman” of a nationalized health service.

The fact is, the rest of the industrialized world live longer and in general, healthier lives, and this can be attributed largely to the fact that access to quality health care is considered a basic right. So, why don’t we have universal health care? It’s true that people in these countries pay higher taxes, but if you add up the co-pays, insurance costs, pharmaceutical costs, etc., Americans actually spend more on health care and get far less in return.  In fact, medical bills are now the number one cause of bankruptcy.

Enemies of universal health care (i.e., the friends of corporate for-profit health care) often tell us about the long-waits our Canadian neighbors experience, but as Moore points out on his website, of patients in six countries surveyed in a recent study of wait times for scheduling non-routine visits, both Britain and France, both with universal health care, scored higher than the United States.  Only Canadians were less likely than U.S. citizens to see a doctor on the same or next day.   The infamous “problem” of “wait time” in Canada does not appear to be the result of their universal health care system. Besides, there is a simple fix: invest even more in health care facilities and services to meet everyone’s needs.  In a country as wealthy as the U.S., there is more than enough money available to do just that. The over $500 billion spent so far on the war in Iraq could certainly be put to better use.

We are also constantly told that the health systems in countries with universal health care are inefficient and that they bankrupt their economies.  This is another blatant distortion of the facts.  The underfunding of health services in countries like Britain, France, and Canada is part of the generalized attack on the wages and conditions of all working people, especially in the industrialized world. Although the workers of these countries have managed to win important concessions from the ruling class through mass struggle, these gains are under relentless attack. It will take mass working class organization and unity to defend against this, but once again, the solution to underfunding is ultimately quite simple: to spend more on social services instead of handing out corporate tax breaks and spending billions on the military.

This is an aspect that does not receive much attention in Moore’s film: just how exactly the workers of these countries were able to win universal health care in the first place.  Former British Labour MP Tony Benn’s explanation that, “It all began with democracy,” is not a satisfactory answer.  In the U.S., we also have “democracy”, but with only two corporate parties to choose from, our choices are very limited.  Then, a Canadian interviewed in the film implies that universal health care was simply bestowed by the magnanimous politician Tommy Douglas of the NDP.   This “great man” theory also leaves quite a lot unexplained.

In order to understand how these colossal gains for the working class were achieved, we must analyze these countries’ histories from a class perspective. All of these countries have traditional mass parties of the working class that allowed the labor upsurge of the post-war period to be translated into political change benefiting the majority, including the winning of universal health care. Without such a party, U.S. workers are at the political mercy of the parties of the billionaires.

When the sweeter-talking wing of our capitalist class does decide to talk about “universal health care”, as was the case in the early 1990s with Hillary Clinton, we need to be sure to read the fine print.   The so-called “Clinton Plan” was in reality an attempt at compromise with the insurance companies, an attempt at “managed competition”.  But even this half-way solution was too much and she was viciously attacked. (It is worth mentioning that in Canada, where universal health care was only wrenched from the ruling class in the early 1960s, a similar campaign of hysteria was initially launched against the proposal.)

Today, as Moore points out in his film, Clinton has been completely bought off, receiving $854,462 from the pharmaceutical lobby, making her the second highest recipient of these contributions in the Senate.   In fact, not a single leading presidential candidate, including Obama and Edwards, has put forward a program that challenges the further existence of the private health insurance racket that plagues U.S. workers.

In one of the more powerful sequences in the film, Moore takes volunteer rescue workers who were among the responders to 9-11, but who are unable to afford care in the U.S., to Cuba to receive care free of charge.  Cuba’s health care system stands as a beacon of hope and a model for health care for the rest of Latin America and the poor countries of the world.   Critics like to point out that Cuba’s system is ranked 39th in the world while the U.S. is ranked 37th by the World Health Organization, but in reality, this is actually both an indictment of the U.S. system and a badge of honor for the Cuban system.

As Che’s daughter, Aleida Guevara, points out in the film, the more developed a country’s productive forces, the greater its capability should be to take care of its people.   Cuba spends just $261 per capita on health care, and yet it is able to offer everyone at least a basic level of quality preventative care, as well as many more advanced procedures and treatments.  The U.S., on the other hand, spends over $6,000 per person, and yet millions have no coverage. Those that do are often treated as if they don’t.

Despite its modest resources, Cuba has a lower infant mortality rate and a longer life-expectancy than those living in the U.S. Because of its nationalized, planned economy, despite the limitations imposed by the longstanding U.S. blockade, a tiny, poor Latin American island has been able to construct a health system that ranks with the most powerful capitalist economy in the world.

On the other hand, the experience of Russia since the fall of the Soviet Union is a warning to those living in countries whose universal health care systems are under attack.  When Russia’s socialized health care system was privatized in the early 1990s, life expectancy figures plummeted from levels similar to those in the U.S. to 66 for women and a 58 for men. SiCKO has struck a chord among U.S. workers, with reactions ranging from disbelief and frustration to anger. There have been numerous accounts of the indignation people feel after seeing the film boiling over into spontaneous “town hall meetings” outside theaters.  In fact, just such a meeting took place outside the theater where Mr. Fitzpatrick of Capital BlueCross saw the film, as he indicates in the above-quoted memo:

“…An informal discussion group ensued outside the theater after the movie…most were incredulous and ‘I didn’t know that [the insurers] did that!’ was a common exclamation followed by a discussion of the example.” It’s understandable why the health insurance companies would prefer that we continue to “not know that they do that!” Billions in profits are at stake and the politicians of both corporate parties are happy to allow this to continue.

Tommy Douglas of the NDP used to tell a political fable called “Mouseland”.  In it, a citizenry of mice (workers) consistently elect a parliament of black cats (conservative capitalists), who were quite mean.  Then, they started to elect the sweeter-talking white cats (liberal capitalists), who turned out to be even meaner.  They elected one or the other of the two parties of cats for years, until they finally decided to elect fellow mice.  This little fable makes a serious political point: we can’t rely on the capitalist parties to represent us.

Through the bitter experience of the joys of life under capitalism, millions of U.S. workers are learning that if our class interests are ever going to be truly represented in government, we need a mass political party  of our own.  Through such a party we will be in a much stronger position to struggle for free, quality, universal health care and education, affordable housing, a living wage and quality jobs for all, etc. In other words, a mass party of labor would give us a powerful tool in our struggle for a society in which the well-being of the majority are more important than private profits – socialism.