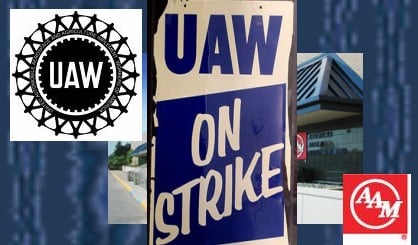 The three month strike of 3,650 American Axle workers was the most recent in a series of defensive strikes in the auto industry, and also one of the longest in recent decades. Despite the fact that the workers’ collective strike action made a dent in the company’s profits (the company lost $370 million in sales), the bosses were determined to “rule or ruin” and maximize their profits. Ballooning oil prices and the economic downturn are impacting profit margins, and workers are being handed the bill in the form of big wage and benefit cuts and  job losses.

The effects of the strike were felt throughout the North American auto industry. The strike shut down production at 30 plants owned by GM, American Axle’s former parent company, which buys most of the parts it produces, costing GM more than $2.6 billion. In addition, GM paid $215 million toward a contract settlement between American Axle and the UAW. According to the Detroit Free Press, this money “ensured that the agreement could include layoff pay, giving the union a settlement officials felt they could present to the membership.”

American Axle workers showed serious determination to struggle, maintaining pickets even through blizzards. But by the third month of the strike, most workers were ready to accept management’s terms, even though the terms were little changed from the bosses’ original demands. By May, most of those on strike were at the end of their financial tether, surviving on a meager $200 per week of strike pay.

With a dark cloud hanging over the economy, food and gas prices rising daily, not to mention mortgage payments and other bills to pay, it was a measure of auto workers’ willingness to struggle that the strike lasted so long.  Many had already been forced to take other jobs just to make ends meet. If the UAW had mounted a nation-wide strike fund appeal to relieve the strikers’ financial strain, which was the main reason they were forced to accept huge cuts, this would have undoubtedly helped to keep the strike going.

The new contract was approved with 78 percent in favor. Under the new agreement, American Axle will close two of four U.S. plants – a forging plant in Detroit and another in New York state. The two plants employ a total of 760 workers. Most American Axle workers will take a $10 per hour pay cut, and their share of health care costs will increase. The new agreement also includes changes in overtime rules, with overtime pay now starting after 40 hours of work in a week instead of after 8 hours of work in a day.

Many are also being offered “buyouts” of up to $140,000 to leave their jobs, or “buydown” bonuses up to $105,000 in exchange for accepting the lower wage structure. In a letter to shareholders, management said that productive capacity lost through worker buyouts in the two remaining U.S. plants would be shifted to a non-union plant in Mexico.

The American Axle bosses, GM and Wall Street are all eager to “restructure”  the auto industry to cut costs to the bone. The new contract will lower the company’s costs by around $185 million per year, and GM will reap 25 to 35 percent of those cost savings. A projection by the investment firm Lehman Brothers estimates that 1,200 of the 3,560 UAW members will take buyouts or early retirement.

American Axle workers were largely left to fight in isolation. There was no attempt by the UAW leadership to reach out and build movement-wide solidarity for such a long and important strike. If GM workers had been called on to stage solidarity strikes at the plants that were still operating, and if the struggle had been spread to the Mexican plant as well, fighting for union jobs and wages no matter where they are located, this could have changed the result entirely. But this was not done, because the UAW leadership would not have been prepared to violate Taft-Hartley, which outlaws solidarity strikes. Why should our unions bow before capitalist laws and courts, when these laws and courts are stacked against us?

The bosses were willing to wait out the strike and absorb huge short-term losses so as to boost their profits even further in the long-term. As the economic crisis continues, the bosses will make even deeper attacks against workers’ wages, benefits, conditions and jobs.

The result of the strike is yet more proof that the “partnership with the bosses” concessions policy of the UAW leadership is a dead end.  Our unions must use all of the resources and options available to them, mobilizing the support of the entire labor movement and our communities, and be willing to struggle until victory. Join us in fighting for class struggle policies in our unions.