Make It A Workers' UPMC! 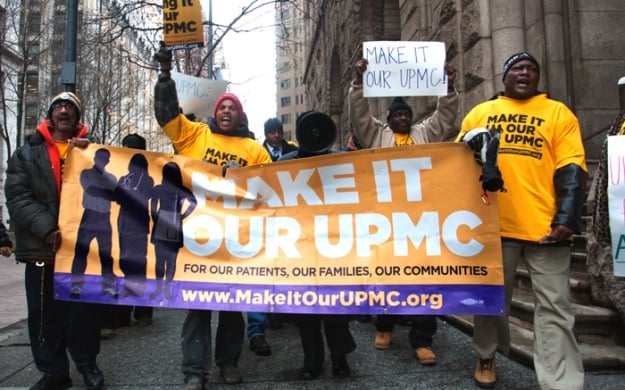 Pittsburgh workers have a rich heritage of class struggle. As workers challenge the largest corporate power in the city, a tradition of solidarity and militancy is being rediscovered.

When the bosses outsourced industry, Pittsburgh transitioned to health care, services, and academic jobs. But while new business titans rose, workers saw the gains of the postwar boom slip from their fingers. US Steel gave way to University of Pittsburgh Medical Center (UPMC), a health care provider and insurer. Union jobs that raised families were replaced by conditions of underemployment, unlivable wages, and overwork. Adjusted for inflation, the lowest-paid worker at US Steel in 1968 made $17.75 an hour. Today, many UPMC workers start at $10.

This is especially devastating as UPMC is the largest private employer in Pennsylvania; it sets the standard for capitalist exploitation. Today, income inequality in Pittsburgh is the highest it has been since the Great Depression. The poverty of workers sharply contrasts to their bosses: in 2012 UPMC paid 27 employees more than $1 million each.

UPMC is also the largest non-government landowner in the city. Yet it pays zero taxes, claiming not-for-profit charity status. This is a cruel joke; over $1 billion in profits were hauled in over 2010–12. If publicly traded, UPMC would rank in at 281 on the 2012 Fortune 500 list. Meanwhile, Pittsburgh schools, infrastructure, and public services are reeling in the wake of underinvestment and budget cuts. This amounts to a giant subsidy out of the pockets of taxpaying workers to the very same company impoverishing them.

If the SEIU-organized union drive succeeds, tens of thousands could win a big victory against their bully. The union has been climbing in its profile and has wide support, and it is an important lesson for labor everywhere.

Gone are the days of competition. Now monopoly reigns, and capital is concentrated in fewer and fewer hands. But ultimately, capitalism’s success at consolidation can be its undoing; centralized employers means centralized employees. One monopoly with a city in its hands is powerful, but it is also a clear target for the workers’ struggle.

UPMC has proven this abundantly. A typical day in Pittsburgh is to overhear a conversation between two strangers about how UPMC is ruining their lives, and it is self-evident that the cause of the UPMC workers is that of all workers. If any more proof was needed, UPMC provided a smear campaign against unions, violations of labor laws, and collaboration with “right-to-work” lobbyist organizations. The company has its initials etched into the Pittsburgh skyline, courtesy of a skyscraper, and now those letters are in the crosshairs of all of organized labor.

Public school teachers, bus drivers, steelworkers, healthcare workers, service workers, UFCW workers, iron workers, mine workers, and more stand with Make It Our UPMC, the union’s public campaign against the company. The UPMC Board of Directors reads like a Who’s Who of the ruling class, and there are a number of university officials on it. Students, seeing their futures mortgaged in student debt to these same individuals, have joined the movement with a student solidarity coalition, which owes many of its successes to sympathetic adjunct teachers fighting for a union of their own. Adjuncts share similar working conditions and pay with UPMC workers, and the solidarity between both has given them invaluable support.

This solidarity is needed everywhere. Divided, workers are material for exploitation. United, we are an unstoppable force. If labor is to fight back, it can’t be with bureaucratic and obsolete divisions. Organizing across trades and work units is a necessity. An injury to one section is an injury to all!

The union’s momentum has earned a sense of optimism. But we mustn’t let it cloud our view of tasks to come. There is a sentiment that if only UPMC is to be organized, all of the happy times of the postwar boom will return. Above all, a romanticization of “the middle class” and the need to bring it back persists. But what is this “middle class”?

The idea of “the middle class” came about with the rise of the postwar boom in the 50s and 60s, when the bosses could afford to make concessions. But as the Marxists explained at the time, what was going up was bound to come down. Soon came the crash of the economy in 2008—the greatest crisis capitalism has yet seen—and the so-called “middle class” was yanked back to its old place.

The “middle class” seems to have pulled a disappearing act. What this really means is that the working class— the class of any wage-earner toiling for a boss —has been reduced to its normal state under capitalism: chronic need and generalized misery. “The middle class,” just like its twin “the American Dream,” is a myth of lost times.

When someone calls for the return of “the middle class,” they mean concretely that a return of livable living standards for the working class is needed. We wholeheartedly agree. Workers, the people who produce everything under capitalism, should never find themselves in poverty. But we distinguish ourselves in one regard—we explain that there is ultimately no way forward for workers on the basis of capitalism. Capitalism is in a deep crisis that shows no sign of genuine recovery for the foreseeable future; any significant and lasting gains for workers are ruled out. The options for the bosses aren’t reforms or concessions; they’re budget cutting, union busting, and wage slashing.

The proudest of victories can only be transitional in these conditions. Even with a union at mighty UPMC, it would still be under constant attack. The bosses can afford nothing else. Labor must recognize this reality and proceed accordingly, giving no concessions and trusting no compromise, which would only serve as a launch pad for further attacks at a later time. Bold demands are needed. UPMC arbitrarily fires workers to bully the union, and when Altoona nurses went on strike, scab labor was hired. Firing and hiring should be controlled by the union. UPMC’s health insurance and healthcare has put Pittsburghers through needless trials for the profits of a few. Big healthcare and pharma must be nationalized and be placed under workers’ democratic control. Any efforts to tax UPMC will be put through a Minotaur’s labyrinth of court battles and lawyer doublespeak. While we are certainly in favor of a heavily progressive tax code, is not enough and can never truly be secured as long as the system itself belongs to the rich. We need a system where the commanding heights of the economy are democratically controlled and planned by the working class. Only then can schools, public transit, infrastructure, and so on get the funding they so desperately need. In short, we need socialism.

The battle for the smallest of concessions lends itself necessarily to a war over which class is in power—the working class or the capitalist class? Today the latter enjoys power and subjects the world to its dictatorship; a landscape of economic devastation and social decay is the result. The problems facing Pittsburgh today, which sparked the union drive in the first place, can only be resolved for good with the overthrow of the capitalist system and the establishment of socialism. Any attempts to find a compromise while our exploiters remain in power will simply delay the inevitable and allow the class enemy time to regroup. We know the character of the people who own UPMC. We mustn’t allow them continued control of the industry that dominates our city.

The Workers International League enthusiastically welcomes the Make It Our UPMC campaign and stands shoulder-to-shoulder with the workers in support. The solidarity across Pittsburgh labor is our greatest weapon, and it should be a model for organized labor everywhere.

A recognized union at UPMC would be a tremendous stride forward for the workers’ struggle, and if it’s won, it must be protected by finishing the fight to a victorious end. Make it a workers’ UPMC!