The International Marxist Tendency typically holds a yearly US national event in Pittsburgh, PA. Last year, we had nearly 100 comrades and guests in attendance. This year we would have met for our national congress in May, but we were forced to cancel this face-to-face meeting given the COVID-19 pandemic—yet the need to build the forces of revolutionary Marxism has never been greater. For this reason, Socialist Revolution hosted its first online National School on June 27 and 28. The school was a great success, with roughly 280 attendees over the course of the weekend and over 200 concurrently on Saturday! Revolutionary socialist ideas are on the rise as workers and the youth seek a revolutionary path out of the crisis of capitalism.

A World on Fire

The school began Saturday morning with an address from John Peterson, the editor of Socialist Revolution, on the militant ferment in the United States. First the COVID-19 lockdown, then the economic downturn, and now the George Floyd protests have challenged and strained the limits of the capitalist system. Although no one could have predicted that George Floyd’s murder would set off militant protests in over 2,000 cities across the country, the IMT did predict that the growing discontent in US society would pave the way for big events on the horizon. While others had written off the revolutionary potential of the American working class, we saw that the accumulation of exploitation and oppression was forming the combustible material for revolutionary upheavals.

A poll showed that the majority of Americans supported the burning of the Third Police Precinct in Minneapolis, and in another recent poll, 45 percent of Americans said that capitalism was not improving their lives. It is increasingly clear that dissatisfaction with the system is widespread and that a vast majority of US society stands in solidarity with the movement. In response, the American bourgeoisie have used both the carrot and the stick in an attempt to curb the protests. Police around the country cracked down against protestors at first, but have now begun to retreat. Members of the National Guard were ashamed to tell their families they were repressing protests in Washington, D.C., and the army troops couldn’t really be sent in given the discontent among soldiers and the potential for mass disobedience. 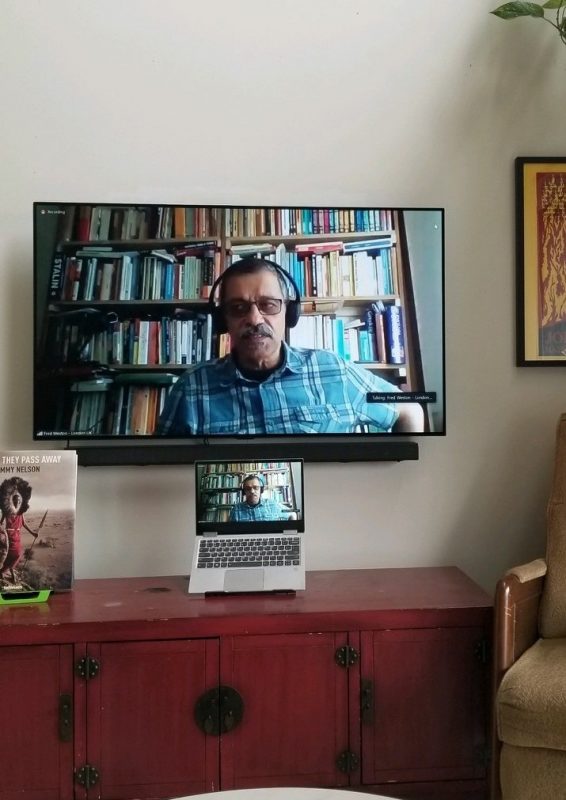 Now, the political establishment is instead attempting to co-opt the demands of the movement. The Minneapolis City Council has “abolished the police”—basically promising to replace the local police department with a law enforcement by another name. At the same time, whatever limited “reforms” the capitalists might be able to offer also threaten to further embolden the working class to challenge the rule of capital. The image of the “all-powerful” US President Donald Trump running to hide in his bunker at the first sign of protestors outside the White House will be forever imprinted in the minds of Americans.

The objective conditions for revolution are developing. The bourgeoisie is divided, the petty bourgeoisie is looking for political leadership, and the proletariat is advancing onto the stage of history. What is missing is a revolutionary party with the capacity to lead the working class to victory—the subjective factor for a successful revolution. The labor leadership in the United States has refused to play an active role directing the movement forward. When they speak, it is mainly to tell the workers to vote for Biden and other Democrats. Already millions of individual workers organically support the movement, but the potential power of the united working class can only be harnessed through collective militant action. A general strike would bring the economy to a halt, paralyzing the profits of the capitalists, and ultimately posing the question: who should really run society? The 8-hour Juneteenth longshore strike in solidarity with Black Lives Matter provides a clear example of the potential for the protests to connect with the broader labor movement. What we have witnessed up till now is only the beginning!

Fred Weston, managing editor of In Defense of Marxism, followed with a presentation in what he described as a “World on Fire.” In over 60 countries anti-racist protests have broken out since May 25, and they are not merely in solidarity with black Americans. These protests are challenging racism, oppression, and exploitation in Brazil, Great Britain, Italy, Canada, and the world over! This ferment reflects the deep contradictions of world capitalism and imperialism, which only a world socialist revolution can resolve. In 2019 alone there were insurrectionary movements in over a dozen countries, and now the embers have sparked in the USA.

The IMT has grown significantly in this last period, not only in the United States but also around the world. This is because we have consistently defended the ideas of genuine Marxism, and the crisis of capitalism has now paved the way for the development of mass consciousness toward revolutionary ideas. Even in countries where we had only a few or no comrades at all, we are getting an echo and are building the international. It is clear that the IMT is starting to become a reference point for a growing layer of socialist workers and youth around the world.

On Sunday, Tom Trottier led off on the history and prospects for the building of a mass socialist party in the United States. Three objective factors in the 19th & 20th centuries impeded the formation of a mass socialist party here: (1) the significant size of the American subsistence farmers, small tradesmen, and other similar sectors up to the early 1900s, (2) the rise of US capitalism and imperialism from the 1780s up to the middle 1970s, and (3) the history and perpetuation of racism and its role in dividing the labor movement. The class-collaborationist policies of the labor leadership also played a negative role in these efforts, as well as Stalinism in the 1930s when the CPUSA was a large force.

American Capitalism is now in a downward trajectory. Today the vast majority of Americans are wage workers and Stalinism no longer wields a significant influence, but racism continues to divide American workers, although it has been weakened due to past and present Civil Rights, anti-racist, and labor struggles. Some on the left, such as the editors of Jacobin magazine, have argued that the United States’ ballot access laws pose an insurmountable obstacle, but we beg to differ. The energy and potential for the formation of a mass independent socialist or labor party—whether economic through the trade unions or political through activist groups—has been building up for decades. No capitalist laws, like the German Anti-Socialist Laws in the 1800s, can hold back the working class forever.

As Marxists fighting for political class independence, it is crucial that we learn the history from past attempts at building mass workers’ parties. The Socialist Party of America (SP), led by Eugene Debs, lacked the necessary political clarity: in a public interview with Debs and Victor Berger, for instance, the two could not even agree on the party’s position on the question of expropriation! Later on, when the revolutionary impulse of the Bolshevik Revolution shook the SP, not one but three Communist Parties split from it. Had there been a consolidated tendency of trained Marxists in the SP in 1917, this radicalization to the left of a majority of its 100,000 members could have been won over into a single organization with a clear revolutionary program. 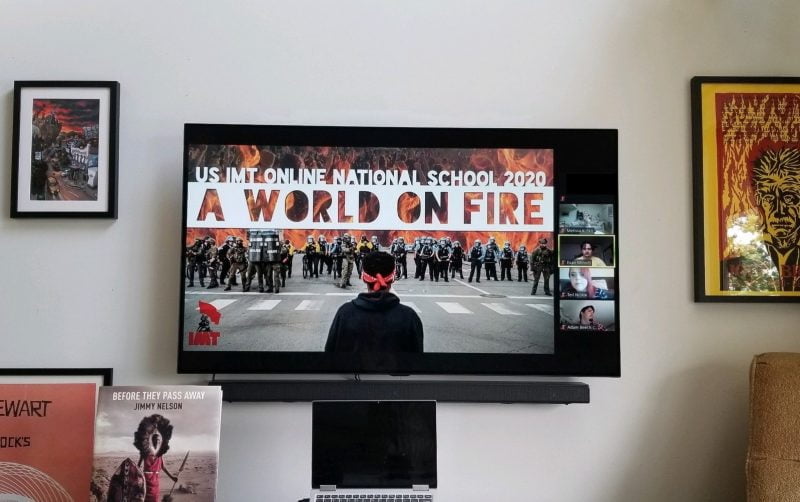 As Stalinism gripped the Communist International in the 1920s, the CPUSA carried out ultra-left sectarian policies from 1928 to 1934. However, starting in 1934, the Great Depression and the example of the October Revolution and the USSR coupled with a change in policy allowed the CPUSA to win some of the best workers to the party—but this was squandered with opportunist policies, tail-ending Roosevelt and the Democrats. Had these opportunist policies not been in place, a mass labor party or even a mass Communist Party would have been possible at that point in history. But the opportunity was missed. Only if we study and draw the right lessons from these mistakes, will revolutionary socialists today be able to play a positive role in the big events that lay ahead of us.

In the last discussion, Antonio Balmer outlined what our tasks are today and what the road to revolution looks like from here. Our 2020 Perspectives for the US Revolution document quoted Hegel, who described a period of transition: the birth of a new epoch emerging from the decay of the old, how this transformation develops from quantity into quality, and only sparse symptoms forebode these revolutionary eruptions. This US Perspectives draft anticipated the sudden and explosive changes yet to happen in 2020. Politically and organizationally, we need to be prepared for these kinds of sudden and explosive changes. This requires tactical flexibility, while always maintaining a principled approach using the Marxist method.

Our essential task remains the same as before: we need to build the revolutionary leadership for the overthrow of capitalism and the establishment of a workers’ government in the US and around the world. We must continue to intervene in events, systematically putting forward a revolutionary socialist program that connects with the immediate demands of the movement—and, in the process, build up an organization of Marxist cadre, of trained workers and youth that will be able to play a key role in the coming American revolution.

The IMT has made important gains in the US in the last period. Comrades are establishing new branches in the South and in the West Coast, and making inroads in many new cities across the country. Many comrades—both veterans and new members—shared their experiences and participated in the discussion for this session and it was very inspiring! Still, we must keep a sense of proportion and continue to build up our forces, patiently but with a sense of urgency. As the crisis of capitalism continues to accelerate, more and more workers are drawing radical conclusions, and we must be ready to play our part when new revolutionary opportunities open up.

Our apparatus has grown in the last year, but we anticipate that it will need to grow further as we continue to develop our work in new areas. In a financial appeal, comrade Pete Walsh explained that in order to expand the IMT’s work—here and internationally—more resources are required. The capitalists will not fund a socialist organization—and if they did, we know it would come with strings attached. The only way we can sustain and expand the work of a politically independent, revolutionary organization is with the sacrifice and money of working-class supporters and members. You can help us here with your contribution, small or large.

Before the conclusion of the school, an appeal was made for all comrades to participate in the International Marxist University 2020 on July 25–28. Already 100 people from the United States have signed up for the event, the majority of whom are new to the IMT! After comrade Antonio’s concluding remarks, we ended the school with a resounding (albeit virtual) rendition of the Internationale and Bandiera Rossa. The prospects for building a powerful Marxist tendency in the United States and for socialism in our lifetime have never been greater!