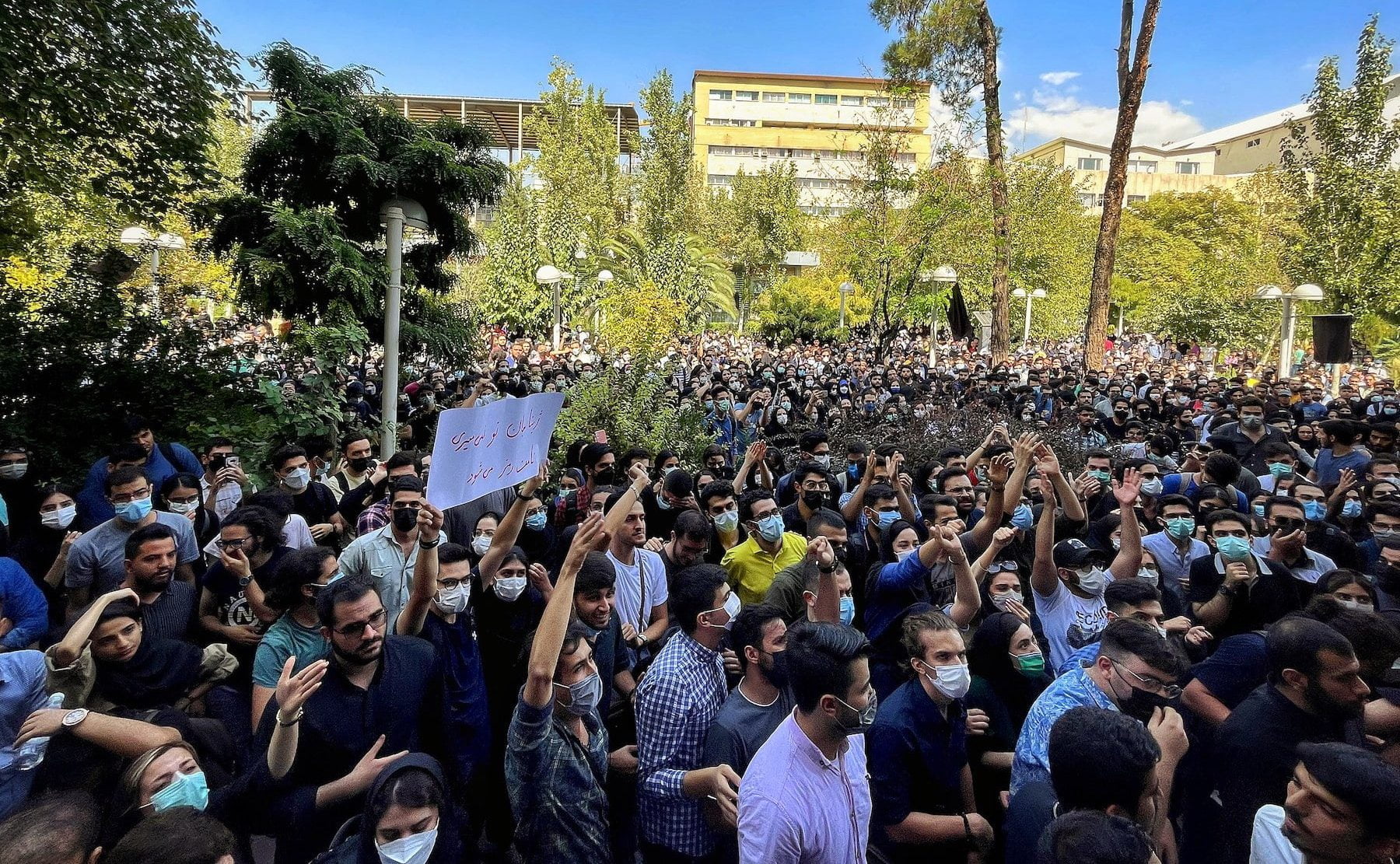 The protests in Iran, sparked by the murder of a young Kurdish woman, Mahsa Amini, have now spread to at least 140 cities across all provinces in the country. It has turned into a national uprising, incomparable to any previous movement in the history of the Islamic Republic.

The regime has responded with hard repression: shutting down internet access and mobilizing nearly all its security forces: the police, counterinsurgency units, the Revolutionary [read: Counterrevolutionary] Guard, and basij paramilitaries. These forces of the regime are more and more openly shooting directly into the crowds, with over 100 confirmed dead already. The real number is likely three-to-five times higher, with hundreds more arrested or injured.

In response, the protesters have defended themselves. On Thursday, in Tehran, protesters armed with sticks and metal rods drove away security forces, only to storm the public prosecutor’s office, forcing officials and security forces alike to flee in fear. In Qeshm, like many other cities, on Thursday night, protestors’ stormed the Friday Imam’s office, setting it ablaze, with one protester exclaiming: “you tortured the people for 40 years—this is the result.”

The most-militant protests are in Tehran and the surrounding suburbs, despite these areas facing the harshest repression, with a serious campaign to arrest revolutionary students. This has only emboldened the protesters. On Friday, in broad daylight, protesters burned images of Ayatollah Khamenei in front of his own home. In response to the harsh repression, in Tehran the use of molotov cocktails has become commonplace.

The whip of reaction

From the start of this movement, the regime has been nearly completely overwhelmed. We saw this in the Kurdish town of Sandanj, in which the regime declared martial law and suppressed the movement on Wednesday night, only for droves of youth to begin flooding into the streets on Thursday evening, breaking all crowd control barriers and driving the security forces away.

In Tehran and the surrounding area, protests are being dispersed, only to restart in another part of the city. The regime cannot keep up with the increasingly militant youth. We have seen this same general pattern across Iran, in which repression by the regime only whips up protests in another part of the very same city: sometimes within hours, sometimes almost immediately.

Even arresting identified protesters at their homes is becoming difficult. In Anzali, for example, security forces attempted to arrest youths from their family homes only to have their parents and neighbors throw them out of the building.

Much like the youth protests in 1978, the prelude to the Iranian revolution 1979, funerals of those killed by the security forces have turned into militant rallies, with speeches calling for the fall of the regime.

Every clash, every arrest, and every martyr has only added fuel to the rage of the masses. In a single day, from Wednesday to Thursday, the protests spread to a further 50 cities. At this point there aren’t any cities left to spread to, meaning the movement is spreading to towns and even small villages!

The movement must not be defeated: for a general strike!

A period of uprisings and constant strikes and protests in Iran has been underway since 2018, but the ongoing movement is greater in scale and militancy than any of the previous uprisings. The occupation and torching of official buildings, while security forces are overwhelmed in nearly every major city, is a qualitative leap forward compared to anything seen previously. These are the very same methods witnessed during the prelude to the Iranian Revolution 1979.

Despite the militant mood of the youth at the forefront, if this movement remains isolated, over time the regime will gain ground in a long, protracted, bloody struggle, which could take days or even weeks. It is only the working class, because of its role in production, which is capable of bringing society to a standstill, stopping the regime in its tracks, and preventing it from unleashing the terror necessary to maintain its rule.

While many of the independent workers’ organizations that have formed in the past period of struggle have made statements in solidarity with protests, unfortunately only the Workers of Tehran and Suburbs’ Bus Company (representing bus drivers) has so far called for a general strike.

The regime has nothing to offer the masses but the worst forms of oppression, poverty and terror. This leaves only one way forward for the Iranian working class: a relentless political struggle against the Islamic Republic. The time for mere statements of solidarity has long passed. The current situation demands nothing less than a general strike to overthrow the rotten Islamic Republic!

The workers’ organizations must immediately put forward the slogan of a general strike in every sector of the economy. They must call for the formation of neighborhood, schools and industrial councils to place the leadership of this struggle on an organized basis, which must be generalized throughout the country.

Faced with such an organized mass movement, the Islamic Republic would be completely impotent, and rapidly overthrown.

Down with the Islamic Republic! Down with Capitalism!

The movement is heading towards a decisive showdown with the regime, which will play out in the coming days.

Regardless of the outcome of the current uprising, the masses, and especially the youth, are reclaiming the revolutionary traditions of the Iranian workers’ movement. Many universities have a revolutionary student group, inspired by communist organizations of pre-1979. Many of these groups have been resolute in the ongoing protests, but their task is greater than that.

Revolutionary Iranian youth, inspired by the ideas of Marxism, must become the most-determined section of the ongoing movement, consistently raising calls for a general strike and workers’ councils. But they must also patiently explain that the only way forward is the overthrow of both the Islamic Republic and Iranian capitalism.

All the demands included in the popular slogan, “women, life and freedom”—that being reversal of austerity measures; provision of a living wage and decent pensions; the democratic rights to strike, protest, assemble; the legalization of independent trade unions; and true equality between the sexes—can only be guaranteed for future generations with the abolition of capitalism.

The Iranian capitalist gangsters have nothing to offer but poverty and dictatorship. The fall of the Islamic Republic must become the first step in the seizure of power by the Iranian working class. And to accomplish this, it is necessary to begin the task of building a revolutionary leadership, steeled in Marxist theory, with a bold program for the socialist transformation of society.