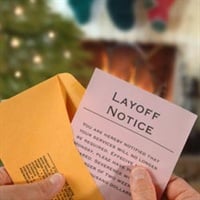 Recently, the New York City Housing Authority has been threatening to fire workers due to cuts in its funding from the Federal government.  As a first step, 21 managers were laid off.  Now, with the slow down in real estate and on Wall Street, the Mayor has told the commissioners of the various New York City agencies to cut their budgets by 2.5 percent this year and 5 percent the next.  This could mean layoffs in other city agencies as well.  Is it not interesting, that during “the boom years,” city workers do not share in the good times, but as soon as there is a down turn, we are forced to bear the brunt of the crisis?

New York City Public employees experience many contradictions in their daily lives.  On the one hand, we see how since the crisis in the mid-1970s, many wealthy people and members of the “upper middle class” have moved into New York, forcing many working class families to move out as neighborhoods were “gentrified,” a word that in effect means: “the rent is going up sky high.”  Wall Street and the banking and finance industries, the main business of the city, did very well throughout the 1990s and into the present decade.  In fact, the New York City government has had surpluses almost every year since 1993.  NYC had a record $4.4 billion surplus in fiscal year 2006. This is a reflection of the hefty profits being squeezed from working people by Wall Street.  The Chief, a civil service newspaper, reported that a study by the New York State Comptroller’s Office concluded that Wall Street firms paid out a record $24 billion in 2006 bonuses.  The previous record was $20.5 billion, set in 2005.

On the other hand, in spite of all this, our wages have not kept up with the increases in the cost of living.  Every year, what we pay on our health plans, unless we have the Health Insurance Plan of New York, continues to increase and there are periodic increases in our co-payments for medications.  How can this be?  Why aren’t our unions doing something about this?

New York City public employees have tremendous potential strength.  The Municipal Labor Committee is the coalition which unites the public employee unions.  This includes AFSCME, District Council 37, with its 56 locals and 110,000 members.  The United Federation of Teachers which has about 80,000 members and Teamsters Local 237 has more than 8,000 members.  The sanitation unions, fire unions and police unions as well as the CWA, OSA and others small locals make up the rest.

Without NYC public workers to do the job, the garbage would not be picked up, restaurants would not be inspected,  municipal hospitals would not be open and the children would not be taught.  Given this situation, the bickering among the labor leadership and their policy of “partnering” with the administration and adhering to the Taylor Law, has created a situation where New York City employees are on the defensive and are vulnerable to attack. (The Taylor Law was passed in New York in the late 1960s after a long strike by the Social Service Employees Union, now AFSCME Local 371.  It penalizes public employees for each day they are on strike or conducting a job action; workers lose two days’ pay and the union loses dues check-off.).

When it comes to bargaining for new contracts, the city uses “pattern bargaining.”  The city drags out negotiations past the expiration of the new contract.  Then the city picks the union that it knows will settle for the least because its members are desperate for a paycheck and then locks in the other unions to a similar contract.

It would only be logical for the all the city unions to bargain together as one united force.  If we bargain together and mobilize the membership by setting up committees at all the city agencies and work places, which would unite all union members regardless of union, we would be better able to project our power.  If it is necessary to go on strike and take on the Taylor Law, the only way we can win is with unity.

It is clear that if a small union, for example, CWA Local 1180, went out on strike alone, it would be very difficult to bring the work of city government to a standstill.  Management would no doubt try to get workers from other unions to do the work of the strikers.  However, even a large union such as DC37, New York’s largest public employee union, could face similar problems, as other smaller unions frequently supervise their members and would be pressured to carry on their work.  It is therefore only logical that if all of the unions bargain and fight together, our strength would be magnified and any job action would have more of an effect.

Yet many union leaders have been resistant to bargaining as a united block and have been even more resistant to challenging the Taylor Law.  Their perspective is to “be nice” to the mayor and the city council – but what has that gotten us?  Raises that do not keep up with the NYC cost of living.

The Labor Movement must demand that those sections of the Taylor Law which penalize strikes and job actions and provide for mandatory arbitration should be repealed. Short of this, if the united labor movement mobilized its power, it could challenge this law in our workplaces and on the streets and reduce it to a mere scrap of paper.  NYC workers need a union leadership that wants to challenge the politicians in City Hall and in Albany, not vote for them.

The fact is, we and the workers in the private sector need our own political representation.  A mass party based on the power and resources of the labor movement and drawing in unorganized workers and others who are oppressed and exploited by big business, could transform all of our lives.  Workers are looking for an alternative to the two big business political parties.  Once founded, it is possible that such a party could be propelled to power in a relatively short period of time.

The bottom line is, union activists and rank and file members who want to change the present situation need to band together.  Through labor unity, militant action, and struggle against the rich and their bought politicians, we can challenge the labor leadership to do what is necessary.

If you are interested in this, contact the WIL and we can start to build this alternative. In New York City, contact
trtnyc@yahoo.com for more info.