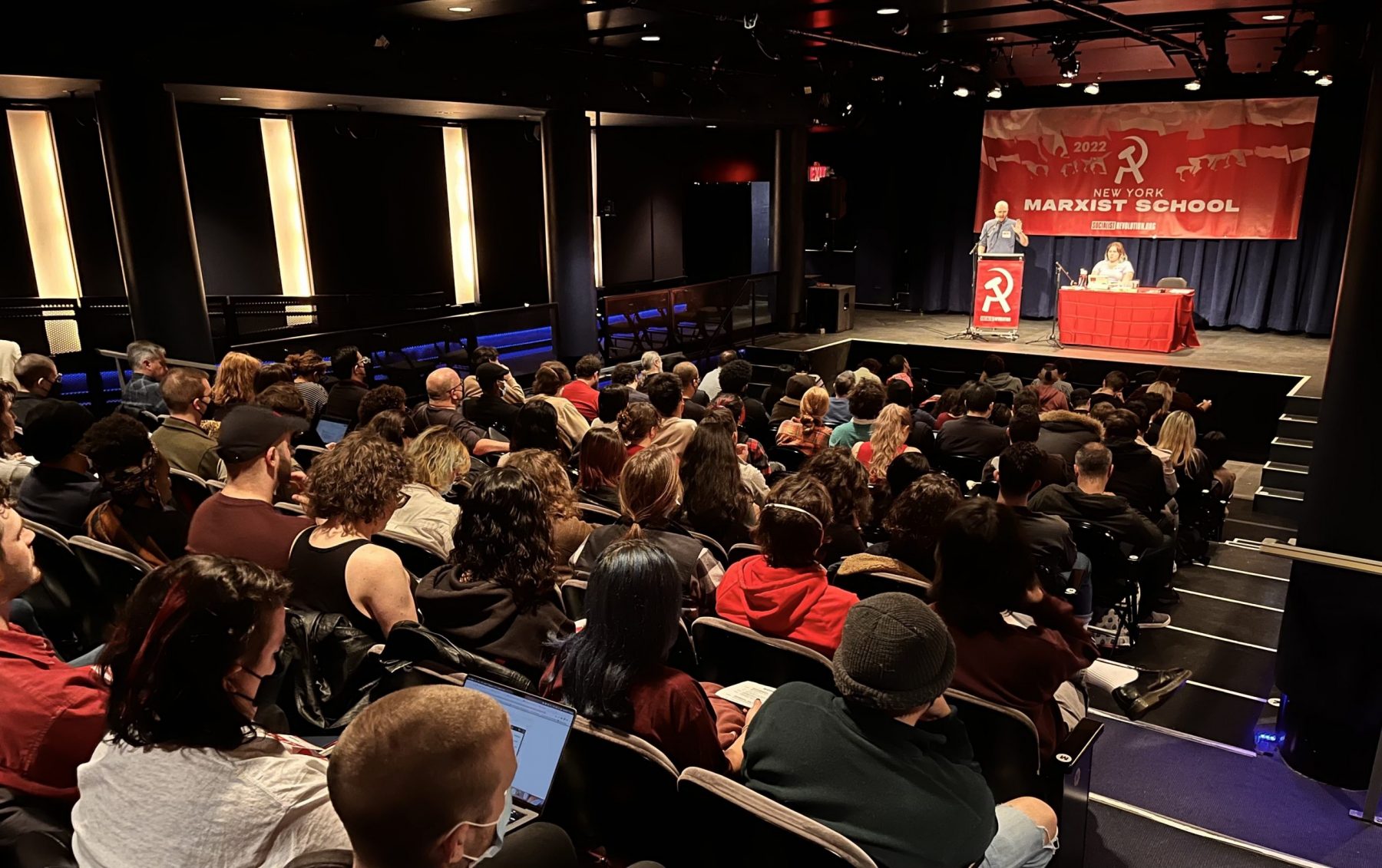 On October 29–30, the New York Marxist School gathered over 130 revolutionary socialists from across the Northeast for a weekend of discussions on Marxism, class-struggle history, and the fight for socialist revolution in our lifetime.

The school was a continuation of Socialist Revolution’s Marxist School event series, with similar schools held recently in Phoenix, Minneapolis, and Atlanta, and one more coming up in Washington state on December 3–4. After two years of pandemic disruption, this was the first New York Marxist School since 2019, and comrades were especially eager to hold an in-person regional event, to catch up with old comrades, and meet many new people who have joined the Marxist tendency in recent years. The NYC branches were joined by comrades from across the metro area, New Jersey, Connecticut, Philadelphia, Boston, Rhode Island, as well as delegations from Canada and Puerto Rico.

The school commenced with a discussion on the USSR, in honor of the 100th anniversary of its founding. Alex Grant from Fightback, the Canadian Section of the International Marxist Tendency, led off the discussion. As Alex explained, young people across the world are turning to the ideas of communism, and in some cases reaching out to their local Communist Parties—only to find reformist-Stalinist shells of what they once were. The origins of this political degeneration, and indeed the explanation for the entire trajectory of the USSR, which collapsed in 1991, are to be found in the early years of the revolution.

For Marxists, the Russian Revolution was undoubtedly the greatest event in human history, marking the first time the working class successfully took power and began the socialist transformation of society. It established the most democratic state that has ever existed. But in conditions of isolation and extreme economic backwardness, the regime of workers’ democracy established under Lenin and Trotsky was usurped by the bureaucracy around Stalin, which arose in the early 1920s. Nonetheless, the many gains of the revolution are a proud and inspiring example of what can be achieved on the basis of economic planning. And as Ted Grant once explained, the collapse of the Soviet Union was merely the prelude to a far more dramatic development: the crisis of world capitalism and the opening of a new epoch of socialist revolution, which we are preparing for today.

Antonio Balmer led off for the second session on why the US is headed towards a revolution. He explained the structural reasons why capitalist society is inherently prone to crisis, and demonstrated with many facts and figures the complete impasse of capitalist society in recent decades. Wages and conditions have been stagnating or declining for decades. Productive investment is much lower than in previous eras. Capitalism is unable to meaningfully develop the productive forces as it once did, and meanwhile, the shocks and crises of the last period are radicalizing the young generations against the system. As Antonio said, this must be the starting point for Marxists when we consider the strategy required to fight for socialism in our lifetime.

For the last session on Saturday, Tom Trottier presented on the topic of Building the Revolutionary Party. Flowing from the previous discussion, Tom explained the importance of building the organized forces of Marxism, which comrades of the IMT are pursuing across the world. Comrades from New York, Philadelphia, New Haven, and Toronto gave reports on the work of the IMT in those cities. Additionally, a comrade from the Puerto Rican delegation gave an inspiring report on the political situation on the island and how the 2019 movement showed the need for precisely the kind of Marxist leadership that comrades of the IMT are building. The day closed with a financial appeal that raised money to help sustain and expand the work of the organization, followed by a lively social.

Sunday opened with a discussion on Class War vs the Culture War, led off by Laura Brown. Laura explained the extent of the so-called culture war in the US in recent years, and what it represents. In the course of the discussion, comrades gave numerous examples of the poison of identity politics, the superiority of class-struggle methods for fighting oppression, as well as the way in which class struggle itself is capable of cutting across racial, religious, and cultural divisions.

After lunch, comrades convened for a discussion of the Great Railroad Strike of 1877, led off by Mark Rahman. Drawing on extensive original research, Mark explained the significance of this “before and after” event, and how it shaped the American labor movement. As several comrades pointed out during the discussion, the missing piece in the strike was also what is needed to take the labor movement forward today: a centralized and coordinated class-struggle leadership, with roots in every city, workplace, working-class neighborhood. With rail workers again entering the road of struggle, and a massive strike possible in the coming weeks, there are many vital lessons to be learned from past struggles.

With this in mind, comrades of Socialist Revolution recorded a message in solidarity with the railway workers who are again gearing up for a potential strike in the coming weeks, after several major unions in the industry rejected the tentative agreement.

Comrades of Socialist Revolution & @FightbackLabour recorded a message at the NYC Marxist School in solidarity with the railway workers. They are gearing up for a potential strike in the coming weeks after major unions in the industry rejected the tentative agreement. Solidarity! pic.twitter.com/TScIWYsnvz

The school ended with some inspiring closing comments by John Peterson, who emphasized that the key takeaway from the whole event is the need to urgently build the Marxist tendency in the Northeast and everywhere else. As John pointed out, the very first New York Marxist School happened 15 years ago, starting with a very small handful of people. But while the US Marxists have made important progress in recent years, there is still a long way to go.

John spoke to the fact that the development of revolution is nonlinear, and the 2020 BLM uprising expended a lot of societal energy. Large numbers of people in US society are severely demoralized and pessimistic at the present time. But by virtue of the method of dialectical materialism, which allows us to see beyond the surface appearance of things, the Marxists are filled with revolutionary optimism. The ruling class is fundamentally unable to stabilize their decaying system, and so it is only a matter of time until the working class again seeks to take matters into its own hands, drawing on the lessons and experiences, the victories and defeats of the past. This is why we need all hands on deck in our efforts to build the IMT in advance. We invite you to join us, and become an active participant in the fight for socialism!