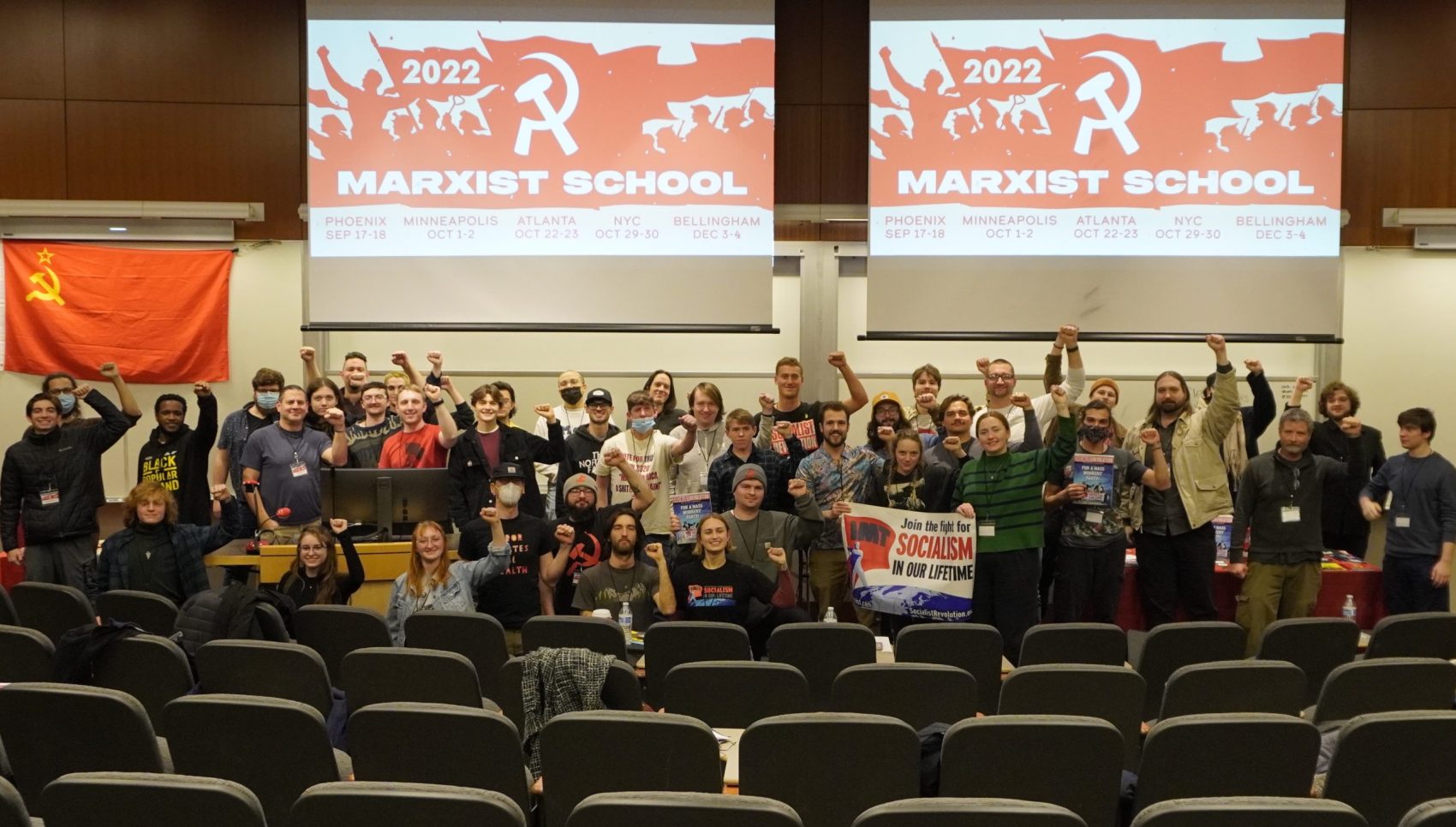 On December 3–4, more than 50 revolutionary socialists attended the first-ever Bellingham Marxist School in Washington state. It was the fifth and final event in a series of regional schools held by the Socialist Revolution this fall, a weekend of inspiring discussions and several firsts for the IMT in the Pacific Northwest.

This marks an enormous success and stepping stone for our work in the region, which has recently experienced rapid growth. It was also the most successful school the IMT has ever held on the West Coast, both in quantity of attendees and quality of discussion, reflecting the firm ground upon which we are now building across the West.

Participants included comrades from Los Angeles, San Diego, Northern California, Oregon, Utah, Idaho, New York, and Seattle, along with contacts and members from across the state of Washington. In addition to this excellent US attendance, comrades also hosted enthusiastic delegations coming across the border from Vancouver and Victoria in Canada.

The school convened in the midst of ongoing developments around several extremely significant and inspiring labor struggles in the US, many of which Socialist Revolution comrades have been involved and intervening in. With class-struggle fightback on the rise, so-called “socialists” in Congress serving as strikebreakers, and the circus of the two capitalist parties in the US on full display in the recent midterm elections, the need for Marxist ideas and militant methods is sharply evident.

The opening session kicked off Saturday morning, on the topic of “Bolshevism vs. Stalinism: 100 Years Since Founding of the USSR.” This discussion was led off by Bryce Gordon, an editor for Socialist Revolution based in New York, who emphasized the fundamental Marxist approach to theory as a distillation of the experience of past struggles.

For Marxists, the October Revolution of 1917 is the single most important event in human history. For the first time, the working class and oppressed not only rebelled against their exploiters and tossed them out of power, but also took power into their own hands and established a new society on the foundations of socialized property and a planned economy. The question of the legacy of the USSR is therefore of critical importance for Marxists.

As the crisis of capitalism polarizes society, “alternative” political trends of all stripes are seeing a revival, including Stalinism—a caricature of genuine Marxism that ossifies its revolutionary method. Reducing Marxism to a dogma, Stalinism obfuscates the vital lessons of past revolutionary triumphs and failures, constructing a revisionist history that acts as an apologia for totalitarianism and political opportunism. Setting the record straight on the reasons for the Russian Revolution’s degeneration, the roots of Soviet bureaucracy, and the Stalinist counterrevolution, the discussion laid bare pivotal lessons. A revolution can only ensure its success by spreading across national borders, and an international revolutionary leadership must be built in advance of the developments that will place social revolution within the grasp of the working class. Building this very leadership is the goal of the International Marxist Tendency.

On Saturday afternoon, participants discussed the paralyzing crisis of US capitalism, which will inexorably move towards revolutionary developments. Led off by Drew Merkel, this session elucidated the factors in the US that have led to a sharpening of class struggle across the board.

The past year has seen growing militancy among American workers, with actions taken at Trader Joe’s, Starbucks, Amazon, Apple, state universities, and beyond. Along with these signs that the slumbering giant of the US working class is stirring under the weight of repeated attacks and brutal inflation, the complete impasse of the American political system, with no viable working class platform on offer, assures that no serious answers will be found at the ballot box.

While 85% of Americans feel the country is “on the wrong track,” the youth, in particular, are actively seeking alternatives to the status quo. Unable to overturn the capitalist basis of the system that placed them in power, the two major parties have no answers to fix the economy. Any attempt to restabilize their economic system will only destabilize the social and political situation. This is a recipe for heightened class struggle in the next period, as their actions continually fall short of what they promise, what’s needed, and what’s possible if the workers move to take power for themselves.

Following an evening of camaraderie and lively informal discussion, the next sessions took place the next day, beginning with a discussion led off by comrade Krissy McGonnigle on the Marxist solution to oppression and the so-called “culture war”—a name given to the heavily stage-managed, publicized, and distracting phenomenon embraced by both capitalist political parties.

In essence, the culture war amounts to cheap pandering around identity politics and other reactionary ideas, isolating issues of oppression from their class foundation and ultimate derivation from inequalities inherent to capitalism. This allows both bourgeois parties and their petty-bourgeois envoys to pose as either fighting against or dismissing oppression. Their ultimate aim is to further divide the working class by obfuscating objective reality and misleading them as to who their actual enemies are. The antidote to this confusion is a Marxist analysis, highlighting that all workers stand to gain from smashing oppressive institutions and ending our collective exploitation. This can only be done by building a strong, unified workers’ party and mass movement raising revolutionary socialist demands, and ultimately, ending capitalism for good.

In the afternoon, the school launched into a discussion on the looming threat of climate change and the Marxist solution to it, led off by Jake Thorp from California. Examining recent climate disasters around the world, clear patterns began to emerge. In Pakistan, a storm hit levees and dams that had gone unmaintained due to austerity. The resulting flooding ravaged villages and camps set up by poor workers already suffering from a deep economic recession. In Jackson, Mississippi, working people already contending with a lack of potable water due to failing infrastructure were hit with disastrous floods, leading to further contamination and subsequent insistence by the governor that the system ought to be privatized.

Record numbers of tornadoes have caused mayhem among economically depressed regions in the South, where the population is largely unaccustomed to dealing with such storms. The driving point of the discussion was clear: climate struggle is class struggle! Everywhere one examines a case of climate disaster, the class struggle is already there, leaving ordinary people vulnerable and reeling from the one-two punch of capitalist-driven disasters. Only a planned economy under democratic workers’ control is capable of appropriating and administering the resources required to ameliorate and eventually reverse climate change.

Our final session was on the need for a new, American Bolshevik party to lead the way in future revolutionary struggles, led off by Jesse Worland. Simply put, a major role of Marxists today is to retie the knot of history. Many of the militant-struggle traditions of the US working class have been forgotten, though not entirely lost. As the memory of the working class, Marxists have an implacable revolutionary optimism towards the future and a sense of proportion gained from taking the “long view of history.”

Basing ourselves on the best traditions of the Bolsheviks and other revolutionaries who came before us, this discussion centered on what kind of leadership is needed to steer the working class to victory. We need cadres painstakingly trained and organized before the onset of big events, working tirelessly to position ourselves to be in eventual lockstep with the coming revolutionary movement of the working class. It’s only with this patient preparation and enthusiastic participation in the class struggle that we will earn our place as leaders of the future American Socialist Revolution.

Finally, the school wrapped up with a financial appeal that doubled the target comrades had hoped to raise! With rousing singing of the Internationale and Bandiera Rossa, we brought the electrifying, first-ever Bellingham Marxist School to an end. This also marked the close of our enormously successful nationwide series of Marxist schools this year. The hundreds of comrades from across North America who have taken part in these discussions are brimming with confidence, eager to see what 2023 holds, as we reach new, fertile ground for Marxist ideas to take root! If you would like to attend future schools such as these and are eager to join the fight for socialism in our lifetime, contact us today!