No to Big Business Bailouts: Nationalize the Auto Industry! 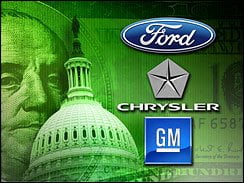 Despite more than two decades of “downsizing” which began in the 1980s, the auto industry still directly employs around 300,000 people in the U.S., with another 4.5 million working in parts suppliers, dealerships and related industries. And even though the U.S. remains the world’s largest car market, the “Big Three” have struggled over the past decade due to inept management and rising gas prices. Auto workers have already been paying the price for the bosses’ inability to produce reliable, affordable and fuel-efficient cars. This is not a minor question in a country where millions of working people lack access to adequate public transit to get to work or go about their daily lives.

Now, General Motors is facing bankruptcy. Ford and Chrysler are not far behind. All of the auto makers face a steep drop in profits. GM’s sales dropped 18 percent in September, while Chrysler’s sales fell by 25 percent. GM lost $18.8 billion in the first half of 2008 and projects that it will exhaust its cash reserves sometime in 2009, rendering it unable to pay the costs of operating its plants.

GM has therefore asked the Federal government for $25 billion in taxpayer money, and asked that it assume $3 billion in pension obligations. GM has also made offers for the government to buy $3 billion in preferred stock in the company. Incredibly, the total value of the proposed bailout is more than what GM is currently worth on the capitalist market. GM has $10 billion in outstanding debt, and in the depressed market its capital is only worth $3 billion. Chrysler, which is also facing bankruptcy, is doing even worse. Daimler, which owns 1/5 of the company, recently “valued” Chryser’s worth as zero.

GM management is confident that an Obama administration will bail them out. But will this bailout help the millions of workers in the industry, or the handful of wealthy stock owners and CEOs at the top? Despite asking for billions in public funds, the automakers have already stated that severe cuts and more plant closings are on the way, even with bailout cash in the company bank account. The bosses have said that they must cut “costs” to the bone in order to avoid bankruptcy.

These cuts won’t be felt by auto workers alone. They will further hurt related industries and the already troubled states, cities and school districts that depend on these plants and jobs to balance local budgets, pay public workers’ wages, and provide services. Anyone who has seen the film Roger & Me knows what plant closings in a major industry mean for all working people. Yet, the auto bosses want our public funds to maintain their profits, stock options and bonuses!

But what is the alternative? If we don’t give the executives what they want, they’ll simply close all the plants and sit on their assets while we stand in line at the unemployment office, right? Wrong! The capitalist owners of the “Big Three” are responsible for this mess. They should not be rewarded for what amounts to economic terrorism, to which we can add public extortion.

The United Auto Workers union and the AFL-CIO and Change to Win federations should demand that GM, Ford and Chrysler be nationalized under democratic workers’ control. Send management and the big stock owners packing without any compensation! For the amount of money they want, the public could buy all three companies outright and offer fair compensation to small investors. Instead of closing plants and cutting jobs, new “green” plants could be opened and thousands of quality, unionized jobs created. These new jobs would bolster local budgets and lead to better quality schools, infrastructure, housing and services.

A nationalized auto industry could finally develop reliable, affordable, electric-powered cars and trucks which would not only help lower the air pollution which plagues our cities, but would help fund, expand and improve the public transit system. Could the auto industry function without the hierarchy of CEOs, corporate production planners and plant managers? Absolutely! Throughout the industry, cost-cutting plans such as “Team Concept” have already introduced important elements of production process planning and management to workers on the shop floor. All that is left to do is take over all in-plant decision making and to coordinate a plan of production within the industry and with the “consumers,” the vast majority of which are working people. This can be coordinated through the AFL-CIO and Change to Win federations which already encompass millions of workers throughout the country and in other branches of industry.

Implementing such a plan would seriously undermine capitalist property relations and the capitalist system itself. Nationalizing the auto industry under democratic workers control would naturally have to lead to similar nationalizations in the steel, aluminum, airline, construction, energy and other industries. The economic crisis offers little alternative to the working class: either accept huge cuts (and unemployment) or fight back!