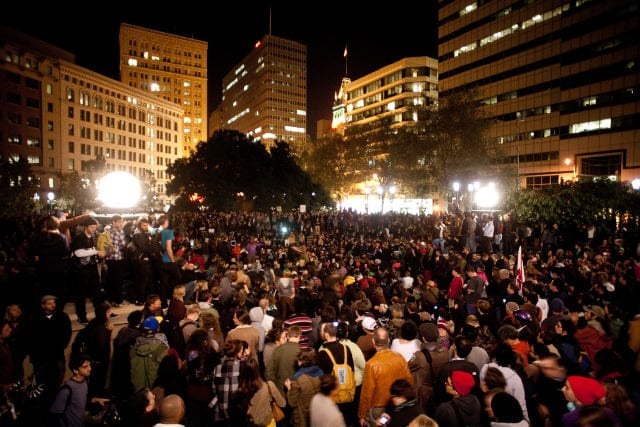 On October 25, people on the streets were confronted by hundreds of riot police launching anti-riot grenades. Plumes of tear gas rose as protesters fled from the rubber bullets of the police. The scene we have described was not in the streets of Tunis, Cairo or Homs, but occurred in the streets of Oakland, California in the United States. On that Tuesday, the police forcefully evicted the occupation taking place in Oscar Grant plaza, renamed so after the police killing of Oscar Grant on New Year’s Eve 2009 in the city of Oakland.

At 3:00 in the morning, police went into the #Occupy Oakland camp with overwhelming force in order to dismantle the camp. Firing tear gas, flash-bang grenades, and bean bag bullets, they ripped up tents and posters that had been set up by the protesters. This included over a hundred arrests and later on, the encirclement of the plaza by riot police and metal barricades. #Occupy Oakland was no more. Or so the authorities thought!

At 4:00 that afternoon, as many as 2,000 protesters gathered for a march against the excessive force used by the police and to reclaim the plaza that they rightfully considered to be theirs. This was a march to reaffirm the #Occupy protests’ right to free speech and to continue the occupation. Protesters marched around downtown Oakland with many others joining in, swelling the size of the march. By 7:30, the march had gone back to the plaza. Protesters flooded the intersection adjacent to the plaza. Ranks of riot police from several agencies in the bay area lined up and announced that the assembly was illegal and that chemical agents would be used against the protesters if they did not dissipate. Even though there was little confrontation from the protesters, they were met with a series of flash bang grenades and rubber bullets followed by several rounds of tear gas. On the ground, it was reminiscent of the scenes Americans have seen on television of repression of protests going on in many countries of the Middle East. (video)

The protesters were not smashing storefronts or car windows, or directly attacking the police that had cordoned off the plaza. Before the police attack, the march had been entirely peaceful. The police launched grenades against a march composed of diverse groups of people including youth, the elderly, and at least one protester in a wheelchair.

One of those involved in the demonstration was Scott Olsen, a two-tour Iraq War veteran. For daring to assert his rights to freedom of expression and assembly, as guaranteed in the Constitution he risked his life to defend, the former Marine was shot directly in the head with a teargas canister. When other demonstrators tried to provide him with medical aid, police fired a stun grenade directly at them, preventing him from getting the medical attention that he needed. He was later rushed to the hospital with a fractured skull and brain damage and remains in delicate condition. The skirmishes with the police continued through the night until the early hours of the morning. The following day, the confrontations with the police continued.

After these episodes of confrontation, the general public’s response was one of outrage. City officials, including the police chief, gave a press conference to explain why excessive force was used against peaceful demonstrators. The public outcry was so high that the Democratic mayor of the city of Oakland, who had backed the forceful removal of the occupiers in the first place, was forced to reopen the plaza to the occupiers.

These kinds of attacks have also been used against occupiers in Atlanta, Portland, and Denver. There were also preparations to evict the protesters in San Francisco on Justin Herman Plaza which was stopped by the massive outpouring of supporters to prevent the eviction. Similarly, the forced “cleaning” of Zuccotti Park in New York was prevented by mass concentrations of protesters, including many union workers.

Once protesters reoccupied Oscar Grant Plaza, a General Assembly was held which it voted 96% in favor of calling for a city-wide general strike and day of action on November 2. Since then, the police have maintained a minimal presence in the plaza, while the protesters have organized preparations for the strike.

What has occurred in the last week of the movement has resulted in a giant leap forward in the consciousness of the occupiers as well as of the general public. What transpired in Oakland has demonstrated that the people are dedicated to the struggle and are willing to fight back for what is rightfully theirs. Moreover, it has demonstrated by the call of the general strike that the protesters have acquired a higher level of class consciousness. No longer is it simply the important recognition that the 99% are controlled by the 1%, but that we, the majority can actually shut down business as usual if we withhold our labor.

The success of the general strike depends primarily on the level of participation of organized labor, which at the moment is the maximum expression of the organized proletariat in the United States. The unions have a duty to lead the rest of our class forward. So far, there have been several statements of support from several unions including the UAW, AFSCME, the California Nurses Association, UNITE-HERE, the Oakland Education Association teachers’ union, and the stalwarts of ILWU Local 10. The biggest union in Alameda county, SEIU Local 1021, has endorsed the strike and is calling on its membership to participate in the actions taking place on Wednesday. The level of support for the general strike call provided by the leadership of the other unions has yet to be seen. The Alameda Central Labor Council has called for support of the November 2nd actions, but has refrained from referring to a general strike as per their following statement:

“The unions of Alameda County stand in solidarity with Occupy Oakland and the 99%, and we fully support the November 2nd Day of Action called by the General Assembly of Occupy Oakland. Unions and members are encouraged to participate and draw attention to the need for good jobs, ethical banking practices, quality public services, and a system where everyone, including the rich and the corporations, pays their fair share.”

This demonstrates hesitation on behalf of the union leadership toward the call for the general strike. In Madison, Wisconsin, at the height of the struggle against Governor Walker, the South Central Federation of Labor issued a vague statement of support for a general strike if one was called. But no date was set and no preparations were made, and a tremendous opportunity to change the course of the class struggle in this country was missed. Unfortunately, in the Bay Area, the majority of the labor leaders are not actively building for and mobilizing the membership in every workplace to actually prepare for a total work stoppage in the city, even though there is a clear date set and broad public support.

The #occupy movement has generated enormous sympathy among the population in general and particularly among union members and workers. However, translating that into actual strike action, even a one-day protest strike, is not that simple. If the labor leadership fails to actually support the general strike effort, this could lead to increased pressure from below. On the other hand, if the strike is even modestly successful despite limited active support from the union tops, it could become a point of reference for the local labor movement, but also for the #occupy movement and unions nationally. So although the actual number of workers who take strike action in an organized way is likely to be low, many will take the day off, call in sick or participate in the actions during the day in one way or another.

No matter how broad the stoppage actually is, November 2nd will mark an important step forward in the movement and a wake up call for the rank and file as to what methods and what leadership it needs. In the context of the United States, the fact that a general strike has been posed in two major struggles in the just the last few months marks an important new stage of class consciousness and the class struggle.

The labor leadership must mobilize the unions’ resources and membership for the fight back on the streets and in the workplace. This includes building real support for actions such as the call for the November 2 general strike in Oakland. Organized labor must join the brave protesters of the #occupy movement who have faced police brutality to defend their rights–the rights of the majority. The police would not be so quick to charge into the organized ranks of the longshoremen and thousands of other workers from the Bay Area labor movement!

But it must also fight back politically, at the ballot box. From the White House to Oakland City Hall, the Democrats have shown their true colors. In the final analysis, we must break from the dichotomy of the two-party system and build an alternative based on the working class, based on the 99%. Labor must break from the parties of big business and build a mass political party of its own! And if it is to truly address the problems facing the majority, it must fight for socialist policies. Likewise, the #occupy movement must reach out to organized labor. Only when the unions fully commit to mobilizing their membership to defend and strengthen the movement will we be able to organize decisive actions that can fundamentally change the system and improve the conditions of those fighting against the 1%.