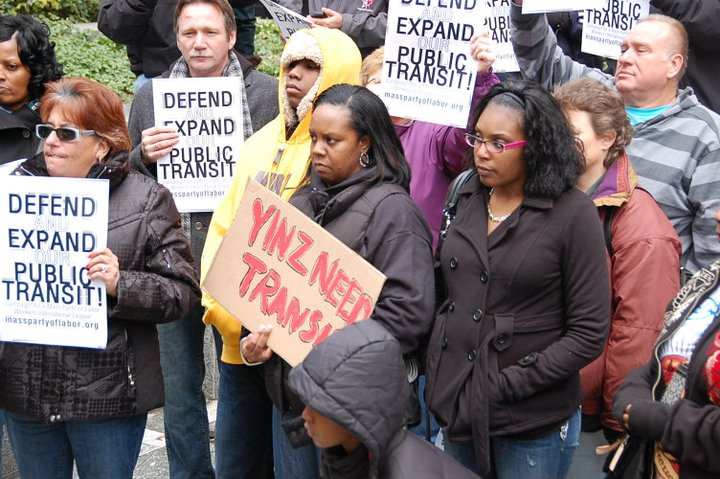 The struggle against transit cuts and union busting in Pittsburgh is now at a critical juncture. Since 2010, Democratic and Republican administrations at both the state and local level have been desperate to force the workers of Allegheny County to pay for the capitalist crisis by implementing devastating cuts to public transit and by attacking the transit workers’ union, ATU Local 85.

In March of 2011, the Port Authority of Allegheny County suffered a 15% cut in service, fare hikes, and the layoff of 180 workers. These cuts have battered an already overstretched transit system, leaving tens of thousands of people without access to transit, severely overcrowded buses and subways, and an uncertain future for public transit in the Pittsburgh region.

In August 2012, Local 85 signed a concessionary contract with the Port Authority. Under the threat of more cuts, the leadership of the union agreed to give up $60 million in concessions, including a two-year wage freeze, a near-doubling of the workers’ contributions to the pension fund, and a big increase in healthcare costs shouldered by the workers themselves.

Local 85’s leaders reached this deal under pressure from Republican Governor Tom Corbett, who promised to allocate an additional $30 million per year to the Port Authority in order to stave off any additional cuts if the union agreed to the concessions. A 2013 transportation funding bill was the expected source of these additional funds, but the Republican-controlled Pennsylvania State Legislature failed to pass such a bill by the June 30th deadline, and Corbett has made no move to allocate the promised funds.

Therefore, Local 85 got the worst of all worlds: concessions, and the very real possibility of further severe service cuts. Unless an emergency funding bill passes soon, major cuts are expected around March 2014. The leaders of Local 85 thought they could cut a deal with right-wing politicians and wait the crisis out­—except that the storm is far from over. Austerity is the order of the day across the world, and Pennsylvania is no exception. The “recovery” is feeble, the state’s financial deficit is high, and the ruling class aims to force workers to shoulder the burden of their decaying system. In such a political and economic environment, there can be no serious talk of reaching deals with the bosses or their governments.

The ruling class is on the offensive, and is determined to first weaken and then destroy the union, slash funding for public transit, and privatize the system. Bargaining and concessions have led only to more severe defeats, and with each passing cut and failed contract, the union becomes even weaker. In The Art of War, the great ancient Chinese general and philosopher Sun Tzu wrote, “In difficult ground, press on; On hemmed-in ground, use subterfuge; In death ground, fight.” The time for a decisive fight to save transit in Pittsburgh and defend Local 85 from a slow death is now.

Militant, class-struggle methods are necessary for victory. Pittsburgh’s transit workers are the life-blood of the city, transporting hundreds of thousands of people daily to their jobs, schools, grocery stores, and hospitals. If Local 85 were to strike in opposition to the threatened cuts and continued threats to its very existence, Pittsburgh would grind to a halt.

Such an action would earn the workers eternal disdain from the ruling class, but with the proper support and determination, Local 85 could triumph. The ruling class could not tolerate the complete shutdown of Pittsburgh’s transit system for a prolonged period, and a militant strike could force them to halt the cuts and to accede to the union.

However, such a strike would be doomed to failure unless the proper preparations were made. The ruling class is skillful at dividing public sector workers from the rest of the working class by portraying them as “greedy” and as “wasting taxpayer money.” Without taking the necessary steps to ready the people of Pittsburgh for the struggle and to win them to the union’s cause, popular opinion could rapidly turn against the workers, thereby giving the ruling class support for the repressive measures they would use.

Court injunctions, back-to-work legislation, and even police action could be used to break the strike. It would be essential for the union to win the support of Pittsburgh’s working class, and especially the rest of the city’s powerful labor unions.

Fortunately, some of the infrastructure for such an outreach effort already exists. Pittsburghers for Public Transit (PPT), which the WIL played a central role in forming and leading, could be a powerful tool for Local 85 in its effort to win the working class to its side. In fact, this is the purpose which we launched PPT for: to be a transit riders’ solidarity campaign with the union. In the context of a strike (and the critical period leading up to one), PPT’s dedicated members could provide an enormous boon to the struggle by helping to rally riders and the general public to support the union.

There is recent precedent for the success of such a campaign in Chicago, where teachers organized in the Chicago Teachers Union struck in 2012 against Rahm Emanuel and his attempts to wrench massive concessions from the workers. The union spent two years during the run-up to the strike reaching out to the workers of Chicago, explaining how the campaign against the teachers was part of a broader effort to shut down and privatize many of Chicago’s public schools, particularly in black and Latino neighborhoods.

When the teachers struck, thousands of community members, parents, and students joined them on the picket lines and in their demonstrations. Polls consistently showed that the union had the majority of the public’s support and the mayor attracted the majority of the blame. The strike ended in a week and the union emerged with a partial victory, having stopped most of Emanuel’s attempts to wrench concessions from the union.

This is a shining beacon of how a public sector union can fight to survive and even win in today’s dangerous anti-union political environment, and is full of lessons that Local 85 would do well to remember during the struggle ahead.

The support of the rest of Pittsburgh’s labor movement would be critical as well. Transit workers aren’t the only public employees in the capitalists’ crosshairs: teachers, state liquor store workers, and state administrative employees are all facing major offensives from the ruling class. Local 85 must reach out to the rest of organized labor­—the Allegheny County Central Labor Council and the Pennsylvania State AFL-CIO—for support.

In addition, Local 85 must reach out to the other ATU and TWU locals throughout the state. If the Pittsburgh transit workers are defeated, other PA transit workers will be next. A united statewide battle would make it more difficult for the state politicians to make it just a “Pittsburgh issue.”

In fact, the best chance all of these unions have is to strike against austerity together. While tactics such as sympathy strikes and general strikes are illegal under the Taft-Hartley Act, organized labor mustn’t forget that unions themselves were once illegal, and it was only the militant struggle of past generations of workers which brought them into existence.

Finally, class-struggle methods must be applied in the realm of politics, as well as in the streets and in the garages. Local 85 has been under relentless attack by both Republicans and Democrats for more than a decade now. The last round of cuts came when both the state and county governments were in the hands of the Democrats, who demanded the same kinds of concessions and cuts that the Republicans now do.

Local 85 has donated thousands of dollars to Democratic politicians (even the very ones responsible for the attacks against them!) during every election cycle. Not only is this a suicidal strategy; it is a complete waste of resources that could be dedicated to organizing the kind of militant action necessary to defend the union. In conjunction with other unions, Local 85 should spend those resources to run workers as independent labor candidates on a platform opposing all cuts and austerity, and in support of workers’ struggles generally. Such an effort could be the beginning of a move towards the formation of an American labor party, whose emergence would transform the entire political situation in the United States.

Ultimately, socialism is the only system in which the livelihoods of workers can be guaranteed, where the resources for quality public services would be plentiful, and in which constant struggle would be unnecessary. Socialism can only come about through the conscious struggle of the working class to defeat and supplant the capitalists and their governments who are responsible for so much suffering and privation throughout society.

Around the world, workers are rising in unprecedented waves of militancy against this system and the people who profit from it. The members of ATU Local 85, Pittsburghers for Public Transit, and Pittsburgh’s working class as a whole have an opportunity before them to enter the stage of history along with workers in Greece, Egypt, Bangladesh, Spain, and everywhere else the working class is on the move.