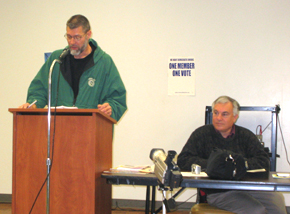 Workers in struggle from across the Midwest gathered in St. Louis, MO on weekend of November 4th and 5th to compare stories and discuss the way out of the dead-end road of the “labor-management partnership” model of trade unionism.  This partnership with the bosses has dominated the American labor movement in the postwar period and has led to one betrayal after another.  The event was primarily organized by labor and media activist Steve Zeltzer, Tim Kaminski, a committeeman at the Daimler-Chrysler plant in Fenton, MO, and several other rank and file trade union activists.

UAW 364 workers from Elkhart, IN came out to tell us of their bitter struggle against the Bach-Steinway company.  They’ve been out on strike for 7 months, and still the UAW, while making strike payments and providing medical benefits, refuses to publicize these workers’ struggle.  In fact, as relayed at the conference, not only are they not publicizing the strike on the international union’s webpage, but an advertisement appears on the site for the Bach musical instruments being produced by the company they are striking against!  As the old song goes:  “Which side are you on?”  The UAW leadership needs to decide.

Boilermakers Local 484 workers from Meredosia, IL, who were locked out for over a year also came to relay their experiences (which can be seen in the documentary film Lockout 484).  They were accompanied by Mike and Jan Griffin from the War Zone Foundation in Decatur, IL. Mike is a seasoned veteran of the “Road Warriors” campaign in the 1990s, a militant rank and file organization formed to spread the word and build solidarity on a national and international scale for the thousands of workers in central Illinois that were in struggle against the Caterpillar Corporation.  His nuts and bolts advice on how to take the fight to the bosses shows just how creative and energetic the U.S. working class can be.

Rob Wilson, a rank and file leader of UAW workers at Caterpillar in Peoria, IL was also present, and lit a fire under the audience, making clear the urgency of these and future organizing efforts.  Dave Johnson of the Carpenters Union and the IWW in Champaign, IL, also laid out a “give ‘em hell” approach as well as describing the difficulties of being in a union like the Carpenters, which has in effect handed its workers over to the boss on a silver platter.

Rosemary Feurer, a labor historian, gave an important presentation on the life and impact of Mother Jones, explaining why it is that she is buried in United Mine Workers cemetery in Mount Olive, IL, not far from where the conference took place.  The reason?  She wanted to be buried with “her boys” so that their sacrifices and struggle wouldn’t be forgotten. Feurer also emphasized the need for a return to the militant strategies Mother Jones advocated.

In an interview with Socialist Appeal, Feurer explained, “[Mother Jones] left a legacy for us to use for the present.  She organized families … In order to win a struggle you have to organize in the entire community to support workers in that struggle.”  You can visit www.remembervirden.niu.edu to view a trailer of a documentary film on the Virden Massacre.

The highlight of the first day was when Miguel Campos, a representative from FRETECO in Venezuela, spoke on the movement for workers’ control in that country. He connected those experiences with the struggles of working people here in the U.S., offering a positive example of just how much power the working class has in its hands.  He began with an introduction on the situation in Venezuela before the Bolivarian process took off.  Many were struck by the similarities between the situation faced by workers in Venezuela back then, and that faced by American workers today.  Of course, there are important differences, but as Campos put it:

“Any Venezuelan worker that had been here at this meeting and heard everything that has been said, would have found so many similarities with the situation that existed in the years before the revolutionary process erupted in Venezuela.  It was a situation in which you had a trade union leadership that had completely betrayed and was isolated from the movement; you had two political parties that shared the power back and forth between themselves; people felt that nothing could possibly change, asking themselves: ‘What can we do?’  We can see the same situation in the U.S., and that’s precisely why there will be a big explosion here as well. It’s like a volcano.  All that lava, all that pressure building up, it’s got to find a way out eventually.”

Campos encouraged all in attendance to come to the Pan-American gathering of workers in struggle and in occupied factories that will be taking place in Brazil in December. Campos’ speech was an excellent close to the first day’s proceedings.  (Stay tuned for a full transcript and streaming audio of his speech)

In an interview with Socialist Appeal, Campos explained that in many ways, Venezuelan trade union activists had been taken by surprise by the speed of events.  If they had been better organized and linked up on a national scale before the revolutionary process really took off, Venezuela today could be much further along the road toward democratic workers’ control over the key levers of the economy – that is, further along the road toward socialism.  He was impressed with the militancy of the workers present at the conference, and could see the terrific potential for U.S. workers to start organizing and linking up their struggles on a national scale.  Even bigger struggles are on the horizon, and the time to start preparing for them is now.

The second day featured a debate and discussion on the way forward for the labor movement and several resolutions were passed.  One was passed to support and publicize the struggle of the Elkhart workers, thus far ignored by the UAW (see below for information on how you can support these workers). Another resolution was passed in solidarity with the people of Oaxaca, currently under attack by federal police.  A vote was taken to support and help organize a May Day celebration in 2007, and to link up with the immigrant workers’ movement, which in 2006 reclaimed this historic holiday for all workers in this country.

The meeting also resolved to launch a campaign calling on SEIU stop supporting Bush’s “guest worker program” which threatens to create an underclass of non-citizen immigrant workers with few to no rights.  Finally, the conference passed a resolution in solidarity with the Pan-American Conference in Brazil, which read as follows:

“This gathering of rank and file workers from throughout the MidWest sends its warmest greetings of solidarity to the workers of FRETECO, Cipla, Interfibra, Flasko, and all the other factories across Latin America that are occupied, under workers' control, and in struggle. We send our solidarity to the Panamerican Gathering taking place in Joinville, Brazil in defense of Jobs, Rights, and Land Reform.  We will work here in the United States to send a delegation and to spread information about this important event.

The National Rank and File Conference”

The importance of meetings like this, where workers from across the country come together to discuss their struggles, lies in the potential for building a national rank and file network to take back our unions.  It is our duty to link up and support workers’ struggles wherever they take place.  It is our duty to build a mass class struggle wing within the labor movement, capable of taking on the bosses and improving the lives of all working people. We need a return to the militancy that marked the formation of many of these unions, particularly the CIO unions in the 1930s. The conference showed that there is a simmering discontent within the trade unions, a discontent that will sooner or later burst to the surface, as can be seen in the example of Venezuela.

Donations to the food bank for the striking Elkhart workers can be sent here:

($750 was raised to help these striking workers at the St. Louis conference)

Tim Kaminski Speaking at the Conference