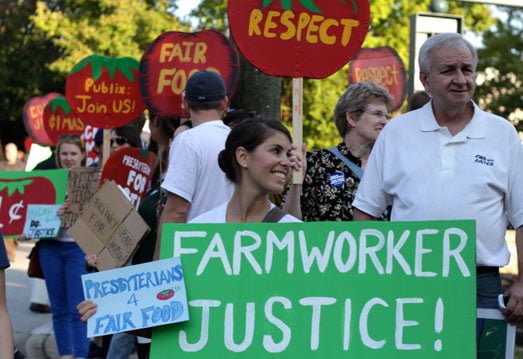 We publish here an article that was submitted to our website about the struggles of farm workers involved in the Coalition of Immokalee Workers. Socialist Appeal is posting this article because we feel our readers would like to know about the conditions one of the most exploited sections of the working class have to live in, and because we support their struggle against agribusiness and the corporations that control the food industry in this country.

The battle should not stop at merely eliminating the worst conditions, but must go even further, in order to guarantee that farm workers win the same rights, wages, and conditions as other unionized employees. However, capitalism is in a deep crisis, and all workers are under attack. The formation of a union, although an important step forward, will not be enough to stop the onslaught. This is why ultimately, only the socialist transformation of society can guarantee a high quality of life for all workers. We support the CIW’s campaign to get the big food companies to adhere to their plan for higher pay and better conditions, but we point out that these same fast food restaurants and supermarkets heavily exploit their own workers. The farm workers’ struggle and the struggle of fast food and grocery workers to unionize and win higher wages and better conditions must go hand and hand. Together, the working class has the power to defeat the big food bosses.

This is why ultimately, only the socialist transformation of society can guarantee a high quality of life for all workers. We support the CIW’s campaign to get the big food companies to adhere to their plan for higher pay and better conditions, but we point out that these same fast food restaurants and supermarkets heavily exploit their own workers. The farm workers’ struggle and the struggle of fast food and grocery workers to unionize and win higher wages and better conditions must go hand and hand. Together, the working class has the power to defeat the big food bosses.

Imagine getting up at 4.30 am and walking to a pickup site to begin looking for work. Over an hour later contractors turn up in pick up trucks to begin the daily selection of workers who will be lucky enough to work for ten hours in 90-degree heat. If you are picked the contractor’s converted school bus will take you to the fields where you will have to work quickly picking over two tons of tomatoes to earn minimum wage. While in the fields you are exposed to dangerously high levels of pesticides which cause your eyes to burn. At the end of a back breaking day, you will be dropped off at the pickup site around eight in the evening and walk home. Maybe you will work tomorrow and maybe you won’t.

If you are lucky enough to get regular work you pay over $50 to share a dilapidated trailer with nine other workers and sleep on a single mattress on the floor. Meanwhile, you get to share the shower along with the rats and cockroaches which scurry around the place. If you are not getting regular work you may be one of the growing army of transient labourers who sleep rough in the woods nearby to the pick up point.

If you are very unlucky you could one of those workers held in debt slavery in a farm camp run by contractors known as crew leaders. It starts off by having to pay a transportation fee for the ride to Florida. Workers are told they can work off their debt over time but cannot leave until their debt is paid off. Workers are then over charged for food, rent, alcohol and cigarettes. In many cases workers have been held against their will under the supervision of armed guards. Workers have been pistol whipped, raped and threatened with death if they try to leave the camp. Many camps are surround by fences topped by barbed wire. Over a thousand men and women have been freed from slave camps in the last fifteen years in Florida.

This working life is typical of that faced by thousands of agricultural workers in South West Florida which is the state’s most important centre for agricultural production. Immokalee is the largest farm worker community in the region. This billion dollar industry is labour intensive and relies upon the ruthless exploitation of migrant workers who lack legal status and fear deportation. The food corporations and major supermarkets have used their purchasing power to ruthlessly drive down wages and working conditions over the last thirty years.

In 1993 a small group of workers began meeting to discuss how to improve their lives. This led to the creation of The Coalition of Immokalee Workers whose early campaigns included organising three strikes and a month long hunger strike by six members in 1998. This pioneering work arrested the thirty year decline in wages for tomato pickers. By 1998 the CIW had won industry wide wage increases of 13-25%.

I spoke to CIW member and farm worker Oscar Otzoy about the pioneering work of the Coalition of Immokalee Workers whose successes are in stark contrast to the decline and retreat of mainstream unions in the United States. Oscar has been a farm worker for over seven years. He comes from a family of small farmers in Guatemala.

What problems do you and other farm workers face on a daily basis?

The Florida agricultural industry has been mired with a history of grave human rights abuses and farm worker exploitation since its inception. And for decades, farmworkers received sub-poverty wages, were forced to work long hours not under their control, and experienced mistreatment and violence from their bosses, or crew leaders, in the fields. If you became too tired to continue and fell behind other workers, you often wouldn’t be hired back the next day. If you ever used tried to file a complaint about the conditions you faced, the companies always sided with the bosses and you would be fired for speaking out.

Why was the Coalition of Immokalee Workers set up?

The Coalition of Immokalee Workers (CIW), a farm worker-led organization in SW Florida, was started by workers themselves to directly confront abuses in the fields, stop wage theft, and put an end to the mistreatment we saw every day on the job. We created the CIW not to address the problems of individuals on a case-by-case basis, but to completely transform the agricultural industry as a whole. And that’s why we launched the Campaign for Fair Food in 2001, calling on major food retailers to work together with us to equalize the imbalance of power that has existed for so many years, give workers a voice and the ability to speak out when their rights are violated, and address the stagnant, sub-poverty wages we were receiving.

What successes has the CIW had?

Through our Campaign for Fair Food, we’ve won agreements with 11 major corporations, giving birth to the Fair Food Program — a partnership between growers, retailers, and farm workers. These 11 retailers have all committed to 1) payment of a “penny-per-pound” premium to be distributed by growers go directly to farm workers, 2) a stringent Code of Conduct, or set of basic human rights, that growers must follow, which includes protections such as zero-tolerance for modern day slavery or sexual harassment, and 3) a voice in the industry to be able to file complaints if the Code is violated and know that they will be investigated and dealt with.

In addition to the participation of 11 major retailers in the Fair Food Program, now more than 90% of all Florida tomato growers are have come to the table, making possible one the the most historical shifts the agriculture industry has ever seen, a change we’ve been seeking for more than 20 years. It’s a change in the whole system of how we produce food in the country, with respect and dignity given to those who harvest our nation’s produce.

Under the Fair Food Program, members of the CIW now have the ability to go into the fields and talk to other workers and explain the new rights they are guaranteed: the right to receive the penny per pound as a bonus in their pay checks, time clocks in the fields to track their own hours, not to have to overfill their tomato buckets any longer, the right to form health and safety committees to ensure safe working conditions, and the right to work without fear of sexual harassment, among others.

What can the wider public do to support the struggle of farm workers for social justice?

The incredible changes we’ve seen in the fields are part of a larger change we’re still seeking. And for that complete overhaul to occur, we need to participation of the remaining hold-out corporations to come on board. The road has already been paved by 11 other retailers, so it’s unconscionable that fast-food restaurants like in Wendy’s and supermarkets like Publix have refused to become part of the Program, a proven solution to decades of abuse. Wendy’s, specifically, has refused to recognize the work that we do to make profits possible. They claim that the tomatoes they buy are from farms that are already in the Program. But, we know that isn’t enough and it’s not what we’re asking them to do. We need Wendy’s to commit to only buy from these farms and agree to suspend purchases if our rights are violated, the cornerstone of the Program. And, we need Wendy’s to start paying the penny per pound, as so many others are already doing. The wider public can get involved by calling on Wendy’s to join the Fair Food Program, by holding pickets at their local stores, speaking to managers, writing letters, and taking action on our website: http://ciw-online.org/wendys/

What is the CIW hoping to achieve over the next 6-12 months?

Our first goal to ensure that the rights that we have won are being implemented across the entire state. We need to continue to train farm workers on their rights and create an industry-wide culture where abuses are no longer tolerated. We need to continue to investigate the complaints that are starting to come to light and hold retailers accountable for those human rights violations. This process is well under way as the Fair Food Program enters its third full season of implementation, but we still need the remaining corporations to put their weight behind the Program for it to grow stronger and benefit more workers. It’s time for Wendy’s, Publix, and all others who have resisted these changes for far too long to get on the right side of history.

To find out more about the campaigning work of The Coalition of Immokalee Workers go to: