Can Abortion Rights be Entrusted to the Supreme Court? 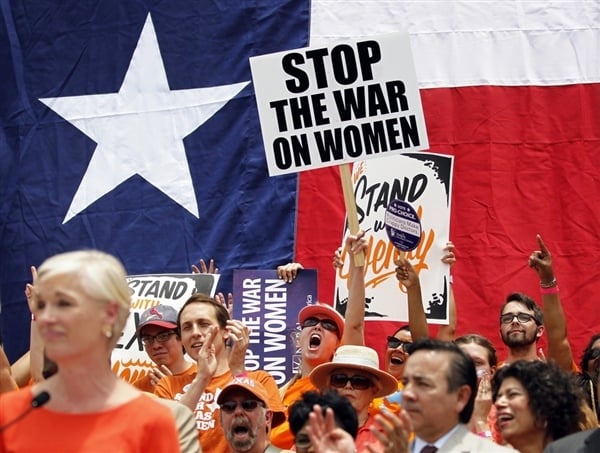 On Monday, June 27, the US Supreme Court voted 5–3 to strike down a Texas law aimed at restricting access to abortion facilities. The following day, similar laws in Mississippi and Wisconsin were rejected and Alabama abandoned its defense for similar legislation. These “Targeted Regulation of Abortion Providers” (TRAP) laws are cynically presented by their proponents as being motivated by concern for women’s health and safety. The laws arbitrarily require abortion doctors to obtain “admitting privileges” at a hospital within 30 miles of the providing clinic and to have hospital-grade facilities. TRAP laws in Texas have reduced the number of abortion clinics in the Lone Star state from 41 to 19 and threatened to shutter the only abortion-providing clinic in the State of Mississippi.

American Civil Liberties Union lawyer Jennifer Dalven explains that “states have passed more than 1,000 restrictions on a woman’s ability to get an abortion. This means for many women the constitutional right to an abortion is still more theoretical than real and there is much more work to be done to ensure that every woman who needs an abortion can actually get one.”

After the US Supreme Court decision Roe v. Wade made abortion legal in 1973, it was argued by hospital administrators that providing abortions in their hospitals would leave them too swamped with new patients. In response, liberal reproductive rights advocates argued in favor of a network of separate, private, stand-alone abortion clinics. This created stigmatized areas that could be easily targeted by anti-abortion picketers and right-wing terrorists, giving the private hospitals even more of a rhetorical excuse not to provide abortions. The segregation of abortions and related procedures from general healthcare has laid the basis for decades of state-imposed “TRAP laws” to restrict access to abortion. It has also provided fertile ground for an endless back-and-forth over this issue in US election cycles.

Since before Roe v. Wade, abortion has been a polarizing question and has been used by politicians as election-year fodder. One need look no further than the 2012 presidential race, when abortion “flip-flopper” Mitt Romney, who was previously pro-choice, opportunistically began to champion a “pro-life” policy. Even more recently, “greater evil” boogeyman Donald Trump has jumped on the bandwagon to tap into a layer of the Republican Party voter base, even promising to “punish” women who get abortions.

This kind of political playing with people’s lives is nothing new. In 1967, then–Governor of California Ronald Reagan signed the Therapeutic Abortion Act, which greatly expanded access to the procedure in that state. Later in his political career, Reagan shifted the Republican Party’s stance on abortion towards the “religious right” as a base of support in elections.

The latest decisions by the US Supreme Court have been hailed as great victories by many and are seen as just the beginning of a rollback of TRAP laws around the country. “We’re ecstatic. The reality is today women won,” Marcela Howell, abortion rights activist declared. But a clear and present threat looms in the minds of many: who will be appointed to the Supreme Court to replace the late Antonin Scalia, and how will that tip the scales on future Supreme Court decisions?

American bourgeois politics has narrowed the discussion of this vital question down to the qualities and credentials of individuals who may or may not be appointed. However, the real question that should be asked is: why is it that some of the most important political questions affecting millions of people are determined by a small handful of unelected judges? As Marxists, we support free universal healthcare including unconditional access to abortions for all who choose to have one. But atomized private clinics and relying on a handful of undemocratically appointed defenders of bourgeois law is no way to guarantee this.

Another threat is the possibility of a Donald Trump presidency and the implications this would have for reproductive rights. However, to this the question must be asked yet again: where has “lesser-evilism” gotten us? In our two-party binary political setup, American workers are told by the media and by the labor leaders that they are obliged to vote for one or another of the bourgeois parties, lest the “greater evil” win. In recent decades, the question of abortion has often taken center stage and has been used to align the necessary forces to push elections one way or another.

Hillary Clinton, who is keen on reminding us that she is, indeed, a woman, has been cynically attempting to wield the lesser-evil dynamic to woo voters that would otherwise prefer to stay home than to hold their nose and vote for a representative of the status quo. Meanwhile, broader questions such as the need for universal employment and labor protections are left untouched.

Bernie Sanders’s campaign revealed just a small layer of those “left out in the cold” by bourgeois politics and the potential that exists if there were a new political party fighting for a bold socialist program. A mass socialist party could guarantee access to abortion in its program and campaign for a complete overhaul of the for-profit healthcare system. Only a socialized, universal healthcare system can end the debate over abortion once and for all. This would require the abolition of the health insurance industry and the nationalization of all hospitals, clinics, the pharmaceutical giants, and medical machine industry. Fully funded and democratically administered by the working class majority of society, public health would improve dramatically.

But healthcare is just one aspect of the question of abortion. As Phillip Levine, a professor at Wellesley College told The Atlantic, “research suggests Roe v. Wade left the US with fewer births, fewer poor children, and maybe less crime.” This grimly reveals the social crisis to which capitalism has driven humanity. Declining standards of living in a world of instability, combined with the crumbling of the bourgeois family with nothing to replace it, has made the prospect of child-rearing a nightmare for millions. The choice of whether or not to help humanity raise a new generation has for many become a cold, neo-Malthusian calculation, and an unplanned pregnancy often amounts to a life sentence of poverty and marginalization.

Trotsky, commenting on the cynicism of the Stalinists, in his classic Revolution Betrayed said, “On this subject, even the optimistic Pravda is sometimes compelled to make a bitter confession: ‘The birth of a child is for many women a serious menace to their position.’ It is just for this reason that the revolutionary power gave women the right to abortion, which in conditions of want and family distress . . . is one of her most important civil, political, and cultural rights.”

Only the building of a new society with guaranteed employment, living wages, universal healthcare and education, and the socialization of housework such as laundry, cooking, childcare, and more can lay the basis for a new stage of human development in which women can freely choose what to do with their bodies—free from all economic, political, religious, or social pressures or compulsion. Only then will working class women truly have the right to have children—not merely a truncated right not to have children.