Overwhelming UN Vote against Blockade of Cuba, which US will Ignore 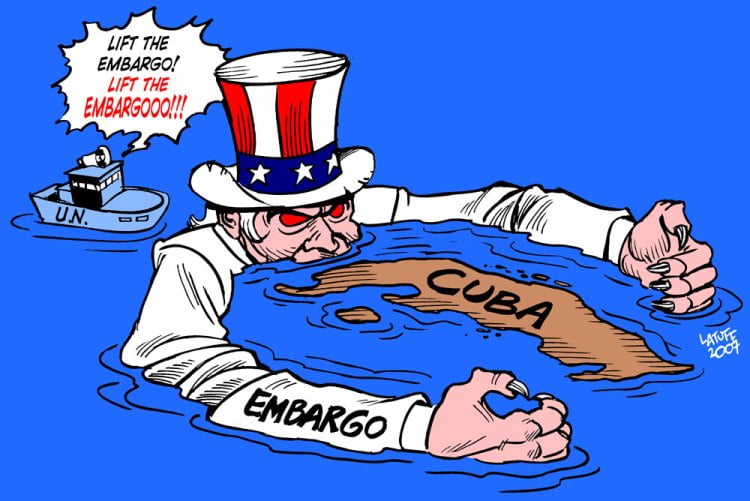 Another year, another overwhelming vote at the United Nations General Assembly against the US blockade against Cuba. This time it was 184 votes for the motion, two against (the US and Israel), and three abstentions (Brazil, Colombia and Ukraine). This is the 29th time the UNGA has voted against Cuba’s blockade since the motion was first put to the vote in 1992, and once again, the USA will completely disregard it.

Cuba’s blockade started in 1962 under the Kennedy administration after the revolution had expropriated all US property in the island. American imperialist companies had owned the main banks, oil refineries, the telephone and electricity companies, sugar cane plantations and mills, etc. The struggle for national liberation could not be completed without expropriating them.

The measures of the blockade have been progressively strengthened over the years, and the partial lifting of some of them under the Obama administration was reversed when Trump came to power. Not only this, but Trump introduced over 240 different measures to tighten the noose around the Cuban Revolution’s neck. Despite the talk about a “foreign policy reset” none of these has been reversed by Biden. Not a single one.

Blockade to strangle the revolution

The blockade is not only illegal under international law, but also affects third countries. So a European bank or a Canadian hotel chain operating in Cuba can be taken to court in the US under the Helms-Burton Act if they “traffic” or have “trafficked” in property confiscated from U.S. nationals by the Cuban state. This has not completely stopped investment and trade between Cuba and third countries, but makes it more difficult.

There is a certain amount of trade between the US and Cuba which is allowed (food purchases in the main), but the blockade puts onerous conditions on Cuba. The cargo needs to be paid in full and in advance before it is even loaded on a ship in a US port and it cannot be insured. Additionally, outside of very limited exceptions, any ship from any country that stops at a Cuban harbor is then barred from any US port for 180 days.

This policy, as well as being illegal under international law and extremely vindictive, has caused massive economic damage to the Cuban economy. It is calculated that just in the last year, the blockade has caused US$9bn worth of damages.

Furthermore, the blockade has not worked in achieving its stated aim: the overthrow of the Cuban Revolution. It represented a dangerous example, in which a small Latin American nation had broken free from imperialist domination, expropriated US property and abolished capitalism. 60 years later, the Cuban revolution endures, albeit with difficulties and problems.

This was understood by the Obama administration, who admitted it publicly and decided to change course, though not their aims. As Obama himself stated, the US still wanted to overthrow the Cuban Revolution, but hoped to do so by means of opening up trade and economic relations. The idea was to throw the enormous weight of the world capitalist market onto the weak Cuban planned economy in order to destroy it. The more far-sighted sections of the US capitalist class were in favor of this policy. The arrival of Trump to power put an end to these efforts, and Washington reverted to the old, failed methods of brazen imperialist bullying.

The farce of “international law”

The vote at the UNGA reveals two things. The US blockade on Cuba is overwhelmingly opposed by the world’s nations (each one for their own reasons). But also, the United Nations is, at best, a toothless talking shop.

The General Assembly can pass any number of resolutions it wishes, on Cuba or Israel for example, as it has done for decades. The big imperialist powers, which really rule the world (and control the Security Council) do as they please, ignoring the votes taken by the overwhelming majority of the world’s countries.

If they cannot get the backing of the UN, the imperialists are content to proceed without it.

This in reality is a faithful reflection of the real way international relations work. They are not based on “international law,” but rather on the real balance of power (economic and ultimately military) between the imperialist countries.

We stand firmly against US imperialist aggression against Cuba and demand the unilateral, unconditional and complete lifting of the blockade. We have no illusions in the United Nations. The only true allies of the Cuban people are the international working class and the oppressed peoples of the world.