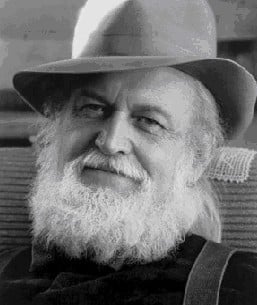 On September 27th, 2008, the son of the self-proclaimed “Golden Voice of the Great Southwest” held a tribute concert for his father and Wobbly, the late Utah Phillips. Ten fellow folk singers and anarchists shared stories and favorite songs dedicated to his memory.

Musically influenced by Woody Guthrie and the emerging folk protest movement of the 1930s & 40s, he styled his moniker, U. Utah Phillips, after his musical hero, T. Texas Tyler.

Born in Cleveland, Ohio, he grew up in Salt Lake City, Utah where he spent many years of his life, always having a love-hate relationship with his adopted state.  It was here he met Ammon Hennacy, a Catholic fellow Wobbly who founded the Joe Hill House. Utah was a long-standing member of the Industrial Workers of the World. He spent many years working with both the IWW and at the Joe Hill House with Ammon. Utah Phillips spent his life defending the rights of the working man, the homeless and the indigent and also had a lifelong passion for trains and hobos.

Around this time he first met fellow folksinger-songwriter Rosalie Sorrels, who was the first to popularize and record songs by Phillips. Sorrels and Phillips became lifelong friends and performed dozens of concerts together over the decades. His first recorded album was Good Though, followed by We Have Fed You For a Thousand Years, and he gained a whole new audience through his joint album with Ani DiFranco, Fellow Workers. Many other musicians, including Tom Waits, Emmylou Harris, Ian Tyson, Rosalie Sorrels, Ani DiFranco and many others, have recorded Utah Phillips songs over the years, including such classics as “Moose Turd Pie,” “Rock Salt & Nails,” “Green Rolling Hills,” “Daddy, What’s A Train,” and “Goodnight-Loving Train.

For many years Utah Phillips hosted his own radio show in Nevada City called “Loafer’s Glory: The Hobo Jungle of the Mind” and was a well-known community activist there. His story-telling abilities were legendary and he could often be found at a picket line entertaining and boosting morale with stories and a few tunes.

In this day and age it’s easy to forget what we join unions for and why we must fight. Listening to the stories told by Utah reminds us of the real reasons we fight. He takes us back to the days of Ludlow, Centralia, and the Haymarket riots, to a time when we had to organize and mobilize for gains such as the eight hour work day, to be paid for non-production time in the mines, be paid with money and not company scrip that could only be used at company-owned markets. While we might have disagreements with Phillips’ Wobbly politics, the important thing about his life was that, above all, he was a link to our American tradition of labor militancy from class struggles in decades past.

Nothing rang more true for the work Utah did and the songs he sang about the working class. Even in his last days he could be found spreading the class struggle gospel via song and story telling.  He was fond of saying, “the long memory is the most radical idea in America.” As the clouds gather around American working people’s collective future, and as a new time is dawning that will be so similar to those radical old days that Utah sang so often about, that long memory will come in handier than we can now realize.