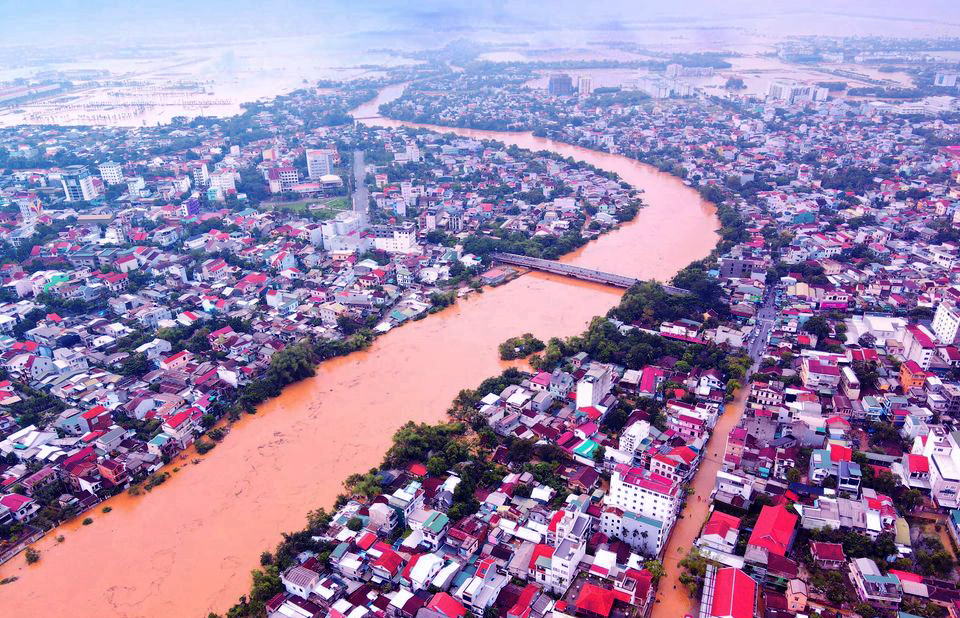 In the past few years, Vietnam has been battered by severe storms, the effects of which continue to be felt and are compounded by the impact of the COVID-19 pandemic. These extreme weather conditions are a global phenomenon, as demonstrated by superstorms around the world; tornado outbreaks in the Midwest and Southern USA; and massive sandstorms in China and Mongolia in late 2021. At root, the climate change which is to blame for these disasters is caused by the rapacious capitalist exploitation of the planet.

The 2020 typhoon season was particularly brutal. Vietnam faced at least seven major storms, triggering torrential rainfall, major flooding, numerous landslides and massive coastal erosion. Hundreds were killed or are missing, over a million were displaced, and tens of thousands of homes were destroyed in the country’s largely impoverished central provinces. Having already endured a severe economic downturn triggered by the pandemic, the farmers and workers of Vietnam were thrown into hellish conditions—conditions that many continue to languish in.

Vietnam managed to avoid a COVID-19 death toll in the hundreds of thousands, as seen in countries like the US, Brazil, and the UK, largely thanks to widespread testing, harsh lockdown measures and strong, unified political and media response, first implemented and practiced during the SARS outbreak in the early 2000s. However, this did not spare the country from the economic effects of the pandemic.

Much of the Vietnamese population are migrants from poorer areas seeking work in the cities. Even under normal conditions, they already had to live hand to mouth. During the first lockdown, millions were deprived of their livelihoods. The government was forced to respond by setting up rice banks to meet workers’ most basic needs. Shortly after, the country was able to quickly reopen its economy thanks to the relatively effective coronavirus response. Still, a global fall in demand hit Vietnam’s export-oriented economy, causing further hardship.

On top of this, the pandemic led the government to shut its borders, which in turn led to a collapse of tourism. A significant amount of Vietnam’s economy depends on tourism, as all the industries linked to it (including hotels, catering, and transportation) account for over 30% of Vietnam’s GDP. The loss of tourism caused a spike in unemployment and a wave of business closures, particularly in the tourist-dependent Central Vietnam.

The string of storms in 2020 triggered “some of the worst [flooding] we have seen for decades” according to Nguyen Thu Xuan Thu from Red Cross Vietnam. Altogether, the floods left 178,000 houses submerged, nearly 700,000 poultry and livestock killed and masses of food crops destroyed. UNICEF reported that, as the sanitation facilities were damaged by the typhoons, the people in the area were left with no access to clean water for drinking, washing, or cooking.

In the first two weeks of October, Storms Linfa and Nangka flooded 136,000 homes and forced 90,000 to flee after they hit Hue province and Quang Binh. At the end of the month, Storm Molave followed—one of the strongest storms to hit South East Asia in 20 years—leaving at least 174 people missing or dead.

It is estimated that 84,600 homes in the central provinces of Thu’a Thiên-Huê, Quång Nam, Quang Ngai, and Da Nanh city, were damaged. The massive rainfall triggered severe flooding and landslides. Thousands had to move to evacuation sites, which were subsequently flooded. The storm critically damaged much of the infrastructure in the region, with hospitals and health centers damaged or destroyed, leaving many without vital health services.

The UN estimates that approximately 7.7 million people lived in affected areas and 1.5 million were directly impacted. Many communities were cut off from the world as electricity and roads went down, prompting the military and UNICEF to intervene. Typhoon Vamco followed in early November 2020, leaving a further 239 people missing or dead in Vietnam.

Far from helping matters, many of the government’s response measures didn’t go far enough or even made things worse. In Central Vietnam, authorities ordered boats onshore days before the first storm in 2020, and 26 fishermen died trying to get inland. Flights were canceled and schools were forcibly closed. At the end of October, the federal government evacuated 1.3 million people but most “evacuation centers” were actually just neighbors’ houses and government offices. They were overcrowded, lacked basic facilities (such as water and sanitation), healthcare, or covid measures and even saw the abuse of desperate women and children, as the United Nations Crisis Team (UNCT) Response Plan highlighted. Some evacuation centers were also flooded. The government handed over much of the response to NGOs, like the Red Cross, UNICEF, who have their own reputation of committing abuse in crisis situations.

But this was only the beginning of the crisis. These kinds of storms are becoming more frequent around the world thanks to man-made pollution, which has warmed the atmosphere and ocean. This leads to typhoons, which have stronger winds than normal storms, and are occurring more frequently. Vietnam’s vast 1,800 mile coastline makes it especially  vulnerable to typhoons, landslides, floods, and the destruction of clean water sources. This will only get worse as the adverse effects of climate change accelerate.

The capitalist economy of Vietnam only made it more vulnerable, and the VCP state is unable to take any meaningful measures to alleviate the damage. 35% of Vietnamese people live in crowded, coastal areas with badly eroded coastlines, with extraction, real estate development and industry accelerating the process. Some regions experience 5 to 10 meters of erosion a year, while Hoi An has lost 10 and 20 meters of land a year for several consecutive years. Even though the VCP state poured VND184 billion (about 8.1 million USD) since 2010 into building infrastructure to stop coastline erosion in the Hoi An province, this was not enough to stop erosion from rain and frequent storms. The VCP did not and could not allocate enough resources to solve the problem.

The increased erosion means storms cause more destruction. At least 80 to 90 houses are already washed away every year by storms. Ecological defenses against floods have been systematically destroyed for resource extraction and real estate. Illegal logging has decimated the country’s Mangrove forests, which formerly protected against landslides and coastal erosion. The National Government’s program to restore them has a mere 50% success rate. With corruption and illegal logging rampant, in general efforts to mitigate these issues have failed miserably.

At the height of the climate crisis, the UN estimated that at least 50 million people (of the 95.5 million people living in Vietnam) would be adversely affected by rising sea levels and powerful storms. Poor, underdeveloped countries are particularly susceptible to the fallout of these events. Of course, even within these countries, not everyone will suffer the same fate. Richer people have the means to shield themselves from the worst effects of these weather events, but poor people are left completely devastated, often losing their lives.

These conditions will also trigger global food shortage and cause financial ruin for small farmers, domestically particularly in the fertile Mekong Delta. The UN reports that this region produces roughly 70% of Vietnam’s agricultural goods, including 55% of rice and 70% of all agricultural goods. Most of these are exported, and in all account for nearly 17% of Vietnam’s GDP, amounting to $17 billion.

Already in 2016, sea water invasions into clean water sources triggered a severe drought. This was repeated on an even bigger scale in 2020, as 33,000 hectares of rice paddies were damaged and nearly 70,000 households suffered from a lack of water. A sea level rise destroying the Mekong Delta’s breadbasket would have a knock on effect on world food security, since many of these agricultural and aquaculture products find homes on foreign shelves and dinner tables.

Typhoon seasons like that in 2020 will become more common as climate change continues. Despite a relatively mild season in 2021, such respite will become the exception rather than the norm. The devastation that extreme weather events cause in Central Vietnam is yet another glimpse of the barbarism that will face humanity if capitalism is allowed to persist. The regime of private property, the nation state, and production for profit need to be abolished if a global problem such as climate change is to be solved.

This problem cannot be dealt with in Vietnam alone. The world’s biggest polluters are large international corporations in the advanced capitalist countries, like the US, UK, and Canada. Therefore, this crisis can only be resolved by worldwide socialist revolution, encompassing the heart of capitalist imperialism. The only way to resolve the climate crisis once and for all is by expropriating the resources of the major polluting companies, placing them under workers’ control, and rationally managing production on democratic lines in order to satisfy human need in harmony with nature.