On Friday, February 11th, recently-elected Wisconsin Governor Scott Walker (R) announced that he is prepared to use National Guard troops as part of his plan to rob public workers of their right to have a union. According to the Governor, the National Guard will be put on alert “in preparation of any problems that could result in a disruption of state services.” But public sector unions and students in Wisconsin have responded in a big way, flooding the state Capitol building with over 30,000 protesters, and with students taking action at five high schools.

Last week, as part of what he calls making Wisconsin “open for business,” the Tea Party-backed Governor introduced legislation that would effectively break union rights for all public sector workers, with the exception of firefighters and police. If Walker’s bill is passed, public workers will no longer have collective bargaining rights, the state would stop deducting union dues from workers’ paychecks, and raises would be denied, except for inflation adjustment. Walker also announced, even before the state Legislature has voted on the issue, that as of March 13th, the state government will no longer abide by its contracts with the Wisconsin State Employees Union, which represents 22,000 public workers, most of which are teachers. The Governor has said that contracts for the rest of the state’s public sector workers — around 175,000 in all — would expire on July 1st.

After Walker’s announcement on Friday, public sector unions and Wisconsin students quickly responded. On Monday, 10,000 union members and supporters (including University of Wisconsin students) demonstrated outside the State Capitol building in Madison as the first legislative hearing on the proposal took place. Hundreds more demonstrated inside the building and flooded into the hearing to speak against Walkers’ union busting proposal.

Also Monday, 100 students at Stoughton High School in Madison staged a two hour walkout, leaving class to attend a rally in support of teachers. On Tuesday, students from East High School, also in Madison, staged a march during school hours to the Capitol building. Beginning early the week, efforts began to link up students into a state-wide coordination and calls also began for students to walk out of class on Tuesday. Even before more wide-scale student actions have begun, state schools superintendent Dan Nerad was pressed just by the idea of a student strike to formally write Governor Walker, urging him to drop the attacks on state unions. 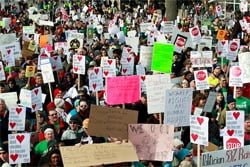 On Tuesday, union members and supporters staged an even larger demonstration of 15,000 at the Capitol, calling for the bill to be dropped and with signs demanding that “Hosni Walker” be recalled. Three thousand crowded into the Capitol building and jammed the second day of hearings. Many of the workers and supporters camped out overnight outside the building between Monday and Tuesday’s demonstration. In addition, some 1,000 other workers demonstrated Tuesday outside Walker’s home.

Walker’s attack against organized workers is being made from a false sense of strength on his part. Just six weeks after he was elected with the backing of the Tea Party, he said that anyone who could not see he was preparing an assault against the unions “must have been in a coma.” But Walker, like the rest of the Republican (and Democratic) party and the corporate media, seems to have gone into a sort of self-induced coma, believing their own hype about the Tea Party having a real mass base in the American population. The initial reaction of the working class to the implementation of the Tea Party’s anti-worker program has quickly shown the real state of affairs!

Governor Walker has said that his proposals are needed to fix the state’s $137 million budget shortfall through June. In both Republican- and Democratic-controlled states, Governors and other public officials are trying to sell a similar story: since public budgets are in the red, public sector workers will have “face reality” and will have to pay the bill with pay cuts and worse. But this is not the reality. In fact, the resources do exist to guarantee decent pay and benefits to public workers, and to expand the sector even more, hiring more workers at union wages and providing more essential services.

However, these resources are instead being used to continue funding the wars in Iraq and Afghanistan, to pump up the bloated military budget, and to provide billions in for the wealthiest 1% of Americans. The two-party political establishment is more concerned with war and enriching its backers than in providing public services and decent standards of living for those who provide them. The reality is that both the Democrats and Republicans are using the public deficits as cover in an attempt to attack and ultimately break the Labor movement, of which public sector workers are the majority.

Despite the big demonstrations so far this week, Walker seems determined to press on for the new law to be passed, even though most Republican legislators have been unwilling to comment publicly as to how they will vote. In fact, while only one Republican has said publicly he supports the bill, three Republicans have said they are not sure how they will vote. This shows that the unions’ mobilizations are having an effect and could possibly force the Republican-majority legislature to vote down the Governor’s bill.

Wisconsin workers are saying: enough is enough! While its clear that the legislature feels pressure from thousands of workers and students packing the Capitol, they are also under serious pressure by their other constituents — the ones who pay for their election campaigns — the big banks and corporations, to go after the unions. The next step is for public sector workers to prepare state-wide strikes, up to and including if necessary a general strike, and forming coordinating committees of public sector unions and students to plan these strikes.

While “legally”, many public sector workers are forbidden from striking, Walker is also “legally” about to tear up the union contracts. Walker may seem to think that “might makes right,” but if public sector workers and students linked together were to organize a total shut down of schools, universities, public facilities and services, they would show that Walker does not have as much might!

Many people have come to doubt or forget about the power of organized labor. Many don’t even consider the National Educators Association a “real” union. But the Wisconsin Education Association Council, the state affiliate of the NEA, reported that on Tuesday night, around 40% of 2,600 teachers, assistants, social workers and psychologists in the bargaining unit called in “sick.” This was nothing less than a concerted job action by the rank and file, very likely against the wishes of the NEA leadership, and it effectively shut down the schools. As of Thursday morning, 15 schools remained closed. This shows the latent power in organized labor, and this is precisely why Walker and others like him around the country want to smash them.

Some people will blame the teachers for “putting their interests” above those of their students. But the solidarity actions of the students show that they understand what is at stake. Slashing pay and benefits and increasing the pressure on teachers through increased class sizes, impersonal teaching curricula, and an end to job security is no way to ensure students receive a decent education!

The impotence and complicity of the Democrats has been exposed in the face of these attacks. Without representatives of their own inside the legislature, Wisconsin workers’ only immediate option is stop Walker’s bill from the outside, continuing and expanding mass demonstrations on the streets, linking up with students and organizing strikes at the schools, universities and public services. But ultimately, there is only so much working people and students can do from the outside. While Walker is a Tea Party Republican, Democratic Governors in California and New York state are preparing vicious attacks of their own on public sector workers.

At the end of the day, both the Democratic and Republican parties represent the same class interests — the capitalist class. Workers need a party of our own: a mass labor party, based on the unions and representing the interests of the working class as a whole. If Wisconsin workers had a Labor Party, they would be able to combine actions on the streets, in the schools, and in local government departments with political action to defeat the bill and expose its nature, which would magnify the working class’ voice and help mobilize even more broadly in defense of public sector workers.

The battle brewing in Wisconsin is the leading edge of the attacks against public workers nationally. The AFL-CIO should pour its resources and mobilize union members and students from across the country to aid Wisconsin workers and help prepare public sector, school and university strikes. If the assault on Wisconsin workers is left unchallenged by the union leaders, this will only make it easier for other governors and state legislatures to attack organized labor. The excellent response of the workers and students within just days of the opening of Walker’s attack shows that if the unions were to expand the struggle, they would have the support of the rank and file.

“From Cairo to Madison, Workers Unite!” Thus read one of the banners at the Wisconsin State Capitol, a clear indication that the Egyptian revolution has had an inspiring and electrifying effect around the world. In this era of austerity, the struggles of workers in one country are an inspiration to workers globally. The Labor movement is fond of the old adage “an injury to one is an injury to all!” But by the same token, a victory for one is a victory for all. A successful struggle against these attacks in Wisconsin would send a clear message to the capitalists: and their politicians workers have have enough of cuts, concessions, and austerity. A victory in Wisconsin would be an important example for the rest of the country and beyond. This is a struggle that can be won!