Against the Coup-Plotting Right Wing in Brazil: For Unity, Mobilization, and Class Independence! 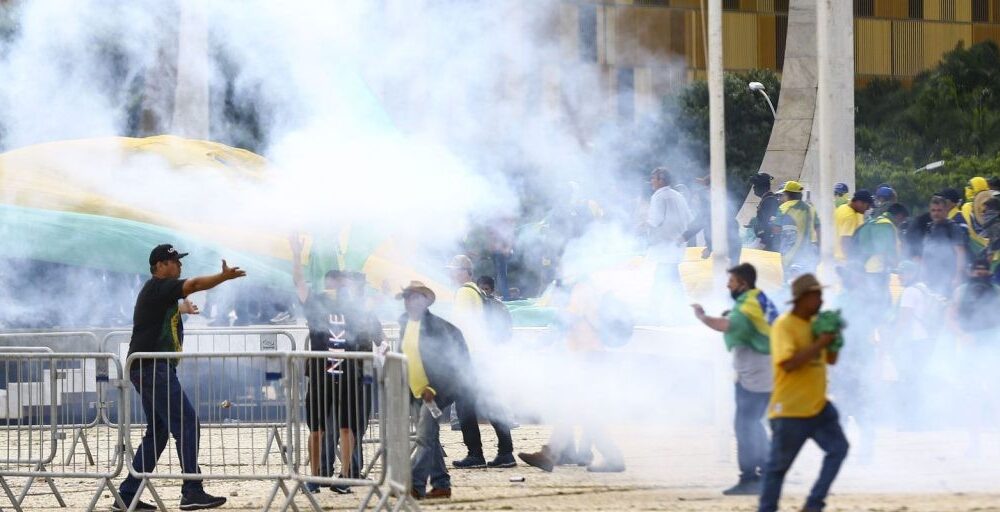 The invasion of the National Congress, the Planalto Palace, and the Supreme Court yesterday (January 8) by Bolsonarista groups—in opposition to the electoral result and demanding military intervention—must be firmly repudiated and fought by the labor, popular, and student movements.

We say this not because the working class has an interest in defending the institutions of the bourgeois state. Rather, we say this because this attack on these institutions comes from the extreme right, which wants to replace them with something even worse. These demoralized, right-wing extremists, this human scum, behaves in an adventurist manner, plundering and destroying property. Their methods have nothing to do with the traditional methods of working-class struggle.

The invasion of these buildings was clearly only made possible with the connivance of the forces of state repression. The reactionary mob, which arrived in Brasilia in a cavalcade of around 100 buses, was escorted by the Military Police of the Federal District to the Praça dos Três Poderes (Three Powers Plaza).

Videos show the police fraternizing with Bolsonaristas and standing by passively in the face of the mob’s invasion and plundering. These events had been publicly organized and called for days in advance. There is no way the state forces can claim they were caught by surprise.

The behavior of the police contrasts with how it confronts popular mobilizations in the federal capital. To give a recent example, in 2017 the mass mobilization of workers and youth in Brasilia against labor counter-reforms by the Temer government was met with a climate of terror. A heavy police presence deployed rubber bullets and gas bombs—helicopters were even flown over the heads of protesters, from which machine guns were pointed at the masses and tear gas was thrown from on high.

The working class should not rely on the forces of repression to resolve the current situation. These are institutions of the capitalist state, whose behavior has favored the development and actions of these extreme, right-wing, coup-plotting groups. The working class and the youth can only rely on their own strength, their own organization and unity, and the independence of their mobilization.

The Lula-Alckmin government, a government of national unity with the capitalist class, extends its hand to the representatives of the right and even the extreme right to join the Cabinet. The Minister of Defense, José Múcio, who should head the defense of the government in the face of coup-plotting behavior, classified the tent camps of Bolsonaro supporters in front of the military barracks, which were calling for military intervention, as an “expression of democracy.”

How could it be otherwise? He is, after all, a member of the PTB, the party of Roberto Jefferson. When he was accepted as one of Lula’s Ministers, he publicly declared that he had voted for Bolsonaro. Meanwhile, the Minister of Tourism, Daniela Carneira, has links with the milicia in Rio de Janeiro (the illegal paramilitary groups made up of serving and former police officers), and is affiliated to União Brasil, the party of former judge Sergio Moro (who led the case against Lula and was Bolsonaro’s minister of Justice)! This is the path leading to the government’s defeat! Lula should use the opportunity of this first incident to change the direction of the government, beginning with the expulsion of the Bolsonarista ministers.

Mobilization in workplaces, schools, neighborhoods and factories are necessary to bury the coup-plotting right wing, and open the way for the fulfillment of the demands of the people, beginning with the repeal of all the attacks on the rights and achievements of the working class carried out by previous governments.

The Trade Union Confederation (CUT) and the trade union and peoples’ organizations must call for and organize mobilizations to defeat the far right, and to politically bury Bolsonaro and the Bolsonaristas. For instance, these organizations must coordinate resistance against Bolsonarists’ attempts to invade oil refineries and to return to road blockades.

UNE, UBES, ANPG and all the student organizations as a whole have a duty to organize assemblies in schools and universities, mobilizing for action against the right and in the fight for the demands of youth.

Mobilizing a united front of the proletariat can open the way for the victories of our class, for the advance of the struggle for socialism, defeating those who intend to install a regime of terror in the country, defending the democratic freedoms and rights of the youth and workers: