Brazil: In Defense of Democratic and Trade Union Freedoms and Workers' Rights 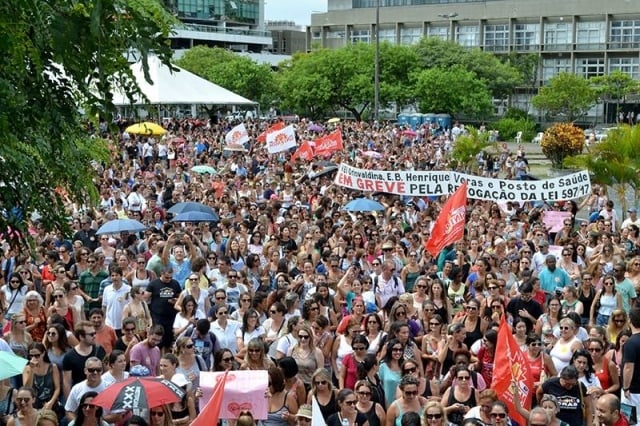 The Union of Municipal Workers of Florianópolis (Sintrasem) is being attacked by the city and the judiciary. International solidarity needed!

The Union of Municipal Workers of Florianópolis (Sintrasem) is under attack by the city and the judiciary. The workers’ strike against a package which involves the withdrawal of acquired rights, and wage and pension cuts approved by Mayor Gean Loureiro (PMDB), was declared illegal by the Regional Labor Court which ruled an end to the strike, a daily fine of R$15,000.00 [US$5000] and, scandalously, decided that the proceedings would be secret! As if it were a criminal case against a criminal gang!

Now, on February 8, 2017, the Attorney General of the executive power, Diogo Pítsica, asked for the “jailing of the leaders of Sintrasem, the dismissal of the union executive, and the state intervention in the union to restore constitutional order.” 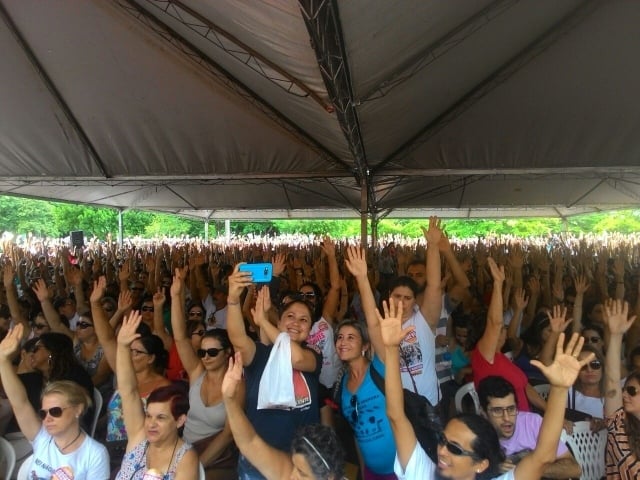 The strike of the municipal workers has been going on since January 5, 2017, mobilizing the entire workforce despite the intense summer weather. Even teachers on holiday participated in the movement during January. On February 7, the largest ever mass meeting held by the union in its history (with over 7000 workers present) decided:

These attacks are part of the general attacks that the working class has suffered in recent years and which have intensified with the illegitimate government of Temer. The federal government with all its counterreforms organizes and guides all the state and local governments to make the workers pay for the crisis which devours this system and which they are unable to solve. The corrupt and bankrupt system attempts to destroy all the conquests of the workers, to continue to promote inequality and the privileges of an exploitative and oppressive minority.

The Florianópolis municipal workers resist. They give an example of struggle and dignity, strength and determination. We are with them. We are one working class. We aspire to unity and struggle to put an end to this hell on earth directed by the capitalists and their governments.

They need our solidarity and political, economic, and moral support. Make contact with the union, share widely news of what is happening. We will not leave them alone. Our class is our strength. Our organization is our weapon. We shall overcome!

We ask all to sign this motion and send it to the authorities and to those responsible for union defence campaign.

To the Mayor of Florianópolis, Gean Marques Loureiro

To the Attorney General of Florianópolis City, Diogo Pítsica

To the Chief Judge of the Santa Catarina Court of Justice, Vera Lucia Ferreira Copetti

We are in solidarity with the demands of the Municipal Workers of Florianópolis, especially with the demand for the repeal of the package of measures adopted in the City Council at the request of Mayor Gean Loureiro, which destroys acquired rights, cuts wages, and destroys pensions. We address ourselves to each one of the authorities responsible for this situation by asking them to:

Our solidarity is unrestricted with the municipal workers and their union, and we will spread news of this campaign in Brazil and worldwide. We will give political and material support to this struggle because what is at stake are fundamental democratic rights, freedom of expression and organization. Revolutions were carried out on behalf of these rights.

We demand that workers’ rights are respected, that all judicial decisions that violate freedom of association are revoked; that the demand for the intervention of the union and the arrest of its elected leaders is withdrawn; that the right to strike is respected and that all the legitimate demands of civil servants from Florianopolis are met; and this requires the revocation of the package of measures to cut wages, cuts rights, and destroy pensions.

Send this resolution to:

Send copy to the coordination of the Union’s Defense Campaign