Catalonia: The Masses Enter the Scene 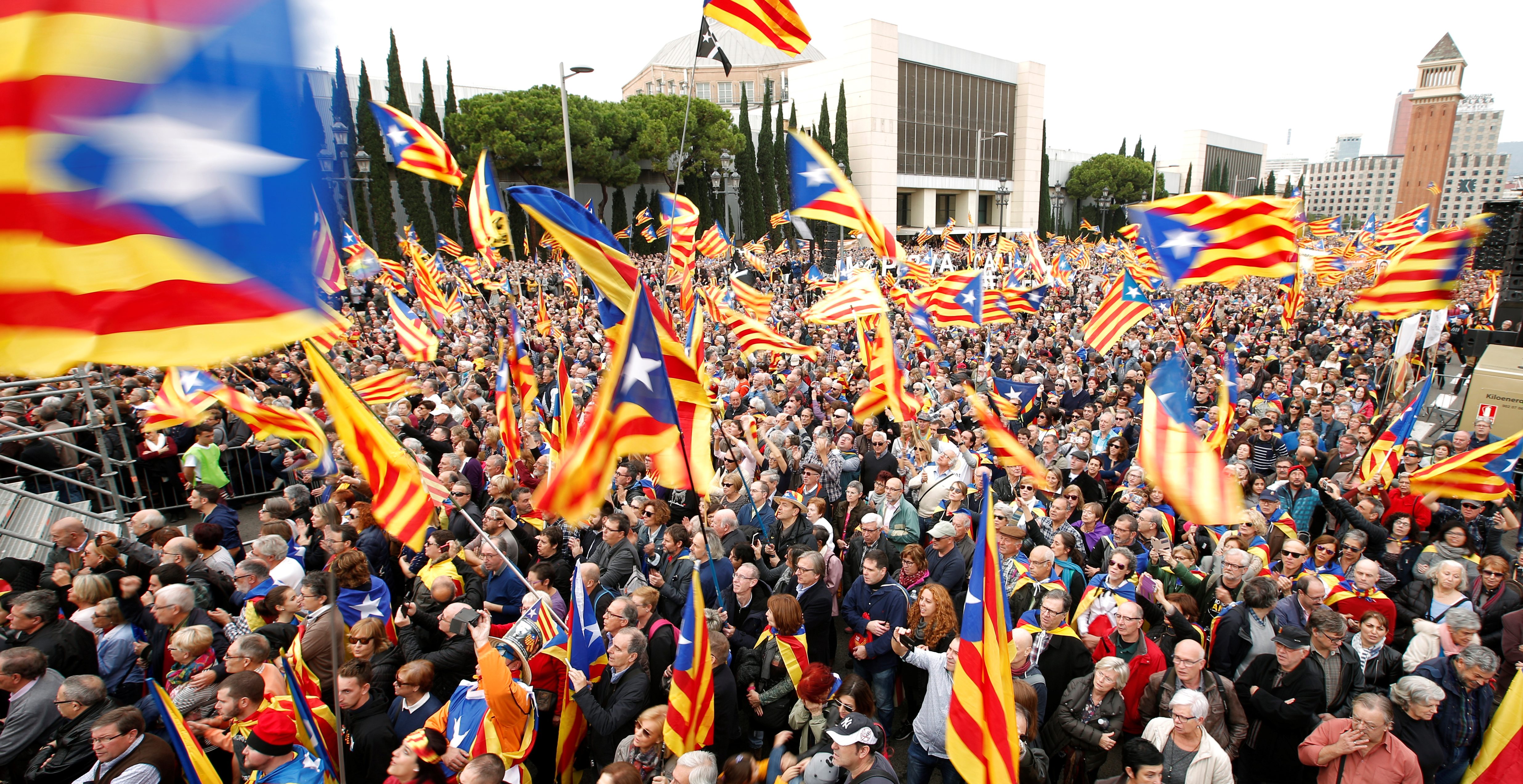 What we saw yesterday in Catalonia was, on the one hand, the real ugly face of the Spanish regime created during the so-called “Transition” at the end of the Franco regime, and on the other the mass mobilization and self-organization of the Catalan people to exercise their right of self-determination. On October 1st the Spanish state had declared the Catalan independence referendum, convened by a decision of the Catalan parliament, as unconstitutional and therefore attempted by all means to prevent it from taking place. For weeks the Spanish state had been indicting Catalan officials, seizing ballot papers and polling material, IDing people putting up posters and seizing buckets of glue and brushes, threatening tens of thousands of people with legal action for the crime of taking part in the referendum in any way, opening a legal case for sedition against tens of thousands who had attempted to block a police search of Catalan government buildings, etc.

In response to this growing repression, Referendum Defence Committees (CDRs) mushroomed in neighborhoods and towns across Catalonia with the main aim of guaranteeing the opening of polling stations and the holding of the referendum.

The police (Catalan Mossos, Spanish National Police and Spanish military police Civil Guards) had been instructed to seal off any buildings which were to be used as polling stations and also to seize ballot boxes in case the referendum was to start.

From Friday evening tens of thousands of people (teachers, parents, students, neighbors) occupied schools and high schools, organizing cultural and sports activities, in order to keep the buildings open until the time polling stations would open on Sunday morning.

In the small town of Riudaura, the mayor had ordered the doors removed from the local school in order to prevent the police from sealing it off.

The Catalan peasant’s assembly had also declared their intention to use tractors and other agricultural machinery to blockade polling stations to prevent the police from reaching them. In the town of Alcarràs, Lleida, they did just that.

Around 6 am Catalan police Mossos arrived at several polling stations. They generally asked who was in charge (“we all are” was the reply, Spartacus-style), and faced with dozens or hundreds of people, they limited themselves to take a record and leave. The mood was jubilant. In most major cities all polling stations were opened and there were no recorded incidents.

By 9 am there must have been around half a million people at polling stations (according to a count by RAC1 radio station) and the overwhelming majority of them had already had ballot papers and ballot boxes delivered. This was another victory in a country where 10,000 police officers had been drafted in and had been trying for weeks to seize the ballot boxes.

However, at that time, Spanish national police and Civil Guards started to arrive at a few polling stations with clear instructions to close them down and seize ballot boxes, despite the fact that hundreds of people were queuing up inside and outside. They used brutal methods, attacking men, women and children, not sparing the elderly.

At the IES Pau Claris in Barcelona police did not hesitate in throwing people down the stairs and brutally kicking them. A woman who was thrown down the stairs says the police deliberately broke all her fingers on one hand, one by one.

Repression was not limited to selected polling stations in big cities, but also took place in small towns and villages across Catalonia. They were acting as occupation forces (like in Sant Iscle, a small town of 1200 inhabitants in the Maresme county, violently breaking into polling stations and seizing ballot boxes:

By the end of the day, there were over 800 people injured, including a man who had received the impact of a rubber bullet (banned in Catalonia) and an elderly man who suffered a heart attack after being pushed by the police.

People attempted to put up peaceful resistance, raising their hands or sitting down on the floor. On a few occasions, they managed to push the police back, like at the Nostra Llar School in Sabadell.

In Sant Carles de la Rápita, in the Ebro Delta, a brutal police charge left 45 people injured. The angry response of the local population was to chase the police out of town, throwing stones at them.

Civil Guards were also chased out from Mont-Roig del Camp, Tarragona, by an angry crowd of local residents Similar scenes took place in several other towns and cities. Throughout the day there were also some incidents in which Catalan Mossos police (more sympathetic to the people) scuffled with Spanish police and Civil Guards.

Even firefighters who were protecting polling stations were attacked by the police in Barcelona. Also in Barcelona, there were instances in which local bus and taxi drivers used their vehicles to block the way of the police.

Meanwhile, groups of fascist demonstrators roamed freely through the streets of Barcelona, beating up anyone they thought was an independence supporter. The police were, of course, busy breaking skulls and seizing ballot boxes.

However, the police were only able to attack a fraction of the polling stations, the overwhelming majority of which remained open throughout the day, with very long queues of voters waiting to exercise their democratic right.

People stayed in their polling stations until well past closing time at 8 pm to protect the ballot boxes and ensure the count took place. Some had been there since Friday evening, others had arrived at 5 am that morning.

At the end of the day, tens of thousands gathered in Plaça Catalunya to wait for the official announcement of the count. A total of 2,262,424 votes had been counted (excluding those which had been seized by the police), and of those, 2,020,144 (90,09%) were YES, and 176,565 (7,87%) were NO. To this, we should add that 400 polling stations had been closed by the police, with a total census of 770,000. Turnout is around 42% but reaches almost 50% if you discount those which have been prevented from voting. Taking into account the conditions of brutal police repression and sabotage (which included disrupting the electronic census system), this is a resounding mandate for a Catalan Republic.

As a comparison, in the 2015 Catalan elections, 1,957,348 people voted for the pro-independence parties in total.

The Catalan government has already announced that it will take these results to the Catalan Parliament within 48h, to discuss a proclamation of independence. However, faced with outright opposition from the Spanish state, the declaration of a Catalan republic can only take place if there is an overwhelming mass mobilization of the Catalan people, continuing with what we’ve seen in the last few days.

Already today, Monday 2, there will be work stoppages at noon and rallies outside town halls to protest repression. A number of smaller unions (CGT, COS; IAC, USTEC) had called a general strike for October 3. Now the Democratic Table of organizations (including the two main unions CCOO and UGT, as well as the Federation of Tenants’ Organisations and other cultural and civil organizations) has joined in, calling for an “economic stoppage”.

The pro-independence anti-capitalist CUP has also issued a call for the general strike. One of its spokespersons and Catalan MP Anna Gabriel has said: “the Referendum Defence Committees should not be disbanded, they should be kept and used to organize the general strike on the 3rd and become embryos of people’s’ power”.

This is the correct way forward. The defense committees should turn into strike committees and continue to organize the mobilization for the Catalan Republic. They should be linked up at local, county and national level. An emergency national assembly of representatives from the Defence Committees should be convened immediately to democratically discuss the way forward for the struggle. We cannot trust the Catalan government of PDCAT to go all the way. Its strategy involves making an appeal to European powers to mediate. The Catalan people can only rely on their own forces, not on the capitalist EU which already crushed the Greek people when they voted against the Memorandum. In the last few days, we have had a glimpse of the strength of the working class in the actions of the dockers, firefighters, bus drivers and others. If organized properly, the October 3rd general strike can paralyze Catalonia. In order to do so, those sections of the working class which are not yet convinced must be won over and that can only be done if the Catalan republic is linked clearly to an anti-austerity, anti-corruption and anti-capitalist program, something the PDCAT is unable and unwilling to do.

The working people of Catalonia also have an ally in the working people of the rest of Spain. There have already been mobilizations of tens of thousands on Saturday and Sunday in the Basque country. In Madrid, thousands filled Sol square once more, in solidarity with the Catalan people, and there were demonstrations in many other cities across Spain. The leaders of Podemos and United Left have already called for the resignation of Spanish president Rajoy. That is to be welcomed but it is not enough. They should immediately issue a call for mass demonstrations in all provincial capitals as well as solidarity strikes on the 3rd. The struggle for a Catalan republic, a massive challenge to the 1978 regime, should be seen as an opportunity to bring down the regime throughout Spain. The government of Rajoy, in reality, is extremely weak, ridden with corruption scandals and relying on the Basque bourgeois nationalists for its parliamentary majority. If pushed with enough force it could fall.

In the next few days, we will see frantic maneuvers amongst sections of the Spanish, Catalan and European bourgeoisie to attempt to find a negotiated way out of the crisis. They are all terrified of the movement they have unleashed. To stave off all of these maneuvers, the Catalan working people should continue on the offensive. The general strike is only the first step.