Contracting Out the War in Iraq 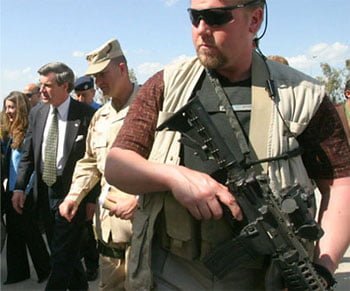 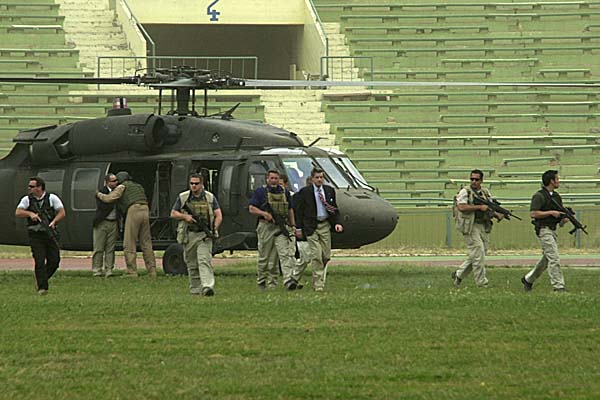 After Blackwater USA’s recent street shoot out in Baghdad, which resulted in as many as 17 civilian deaths, the role of mercenaries in Iraq has received extra attention in the media. Although they have played a key role in the occupation of Iraq since the fall of Saddam Hussein, these “private security contractors” have for the most part flown under the public radar. For example, the debate over a U.S. withdrawal from Iraq usually centers around the 160,000 military personnel occupying the country. But what about the estimated 182,000 private contractors now deployed in Iraq? During the 1991 Gulf War, the troop-to-private contractor ratio was about 60 to 1. Now they outnumber uniformed troops, more than doubling the actual size of the occupation force.

Private contractors in Iraq do everything from cooking food and doing the laundry to driving trucks and building bridges. Using them on such a vast scale is part of the privatization of the war, which is not only politically convenient, but results in massive profits for the companies involved. As of July 2007, there were more than 630 war contracting companies working in Iraq for the U.S. government.

Not only has there been a “surge” of uniformed troops, but mercenaries have headed to Iraq by the thousands. The use of mercenaries has allowed the Pentagon to increase the number of armed troops on the ground without resorting to a draft. Although the UK has steadily drawn down its troop levels, many of these troops have been replaced by private contractors, and thus aren’t counted in the troop levels disclosed, thus cutting across the growing anti-war mood. And since they are technically “civilians”, the estimated 900 dead mercenaries and 13,000 wounded aren’t counted in the official casualty figures (over 200 Blackwater contractors have been killed alone).

Blackwater USA was founded in 1997 by former Navy Seal Erik Prince – with the help of his billionaire parents. Headquartered in North Carolina, it is one of at least 28 private security contractors operating in Iraq. It has an estimated 1,000 employees in Iraq, and specializes in protecting high level functionaries and dignitaries. The four mercenaries killed by a mob in Fallujah in March 2004, which subsequently led to the “Guernica”-style pulverization of that city by the U.S. military, were working for Blackwater.

They are part of a “shadow army” of an estimated 30,000 security contractors operating in Iraq that is better armed, trained, and funded than the militaries of many countries. According to Blackwater’s corporate website: “We are not simply a ‘private security’ company. We are a professional military, law enforcement, security, peacekeeping, and stability operations firm … We have become the most responsive, cost-effective means of affecting the strategic balance in support of security and peace, and freedom and democracy everywhere.”

As with everything else under capitalism, the security contractor industry is ultimately about profits. In an astonishing report by Vanity Fair, it is estimated that private contractors working in Iraq are paid as much as much as the combined taxes paid by everyone in the U.S. with incomes under $100,000. Jeremy Scahill, an independent journalist who has written extensively on the subject reports: “Some in Congress estimate that up to 40 cents of every tax dollar spent on the war goes to corporate war contractors. At present, the United States spends about $2 billion a week on its Iraq operations.”

He continues: “RJ Hillhouse, a blogger who investigates the clandestine world of private contractors and U.S. intelligence, recently obtained documents from the Office of the Directorate of National Intelligence (DNI) showing that Washington spends some $42 billion annually on private intelligence contractors, up from $17.54 billion in 2000. Currently that spending represents 70 percent of the U.S. intelligence budget going to private companies.”

With a $750 million-plus contract in Iraq alone, Blackwater is a clear example of how family connections and hefty campaign contributions to politicians can lead to enrichment through government contracts. In total, billions of dollars have been handed out to companies such as DynCorp, Triple Canopy, Erinys and ArmorGroup.

These and other mercenary corporations also operate in Latin America, Africa, and other parts of the world. In Colombia, under the fig-leaf of the “war on drugs”, private defense contractors receive as much as half of $630 million in U.S. military “aid” sent as part of Plan Colombia, a spearhead of U.S. imperialism against the Latin American revolution.

In African countries such as Congo, Sudan, and Somalia, mercenary companies are cashing in on lucrative contracts handed out by the United Nations’ “peacekeeping” missions. Doug Brooks, a lobbyist for the private military industry, proudly explains that his association’s “member companies have more personnel working in U.N. and African Union peace operations than all but a handful of countries.”

These mercenaries are hired at extravagant rates of pay, far more than uniformed troops. Many soldiers “retire” from active duty military service and work for private security companies instead. It has been noted by some commentators that many are actually paid more than the Secretary of Defense. They are mostly ex-U.S. and UK special forces personnel (trained at tax-payer expense), but also include Chilean special forces from the Pinochet era and South African mercenaries from the apartheid era. It is not uncommon for the most-experienced of these “guns for hire” to make as much as $1,000 per day, with the average closer to $600 a day. By contrast, the average U.S. soldier makes just $57 per day.

The September 16th shooting of innocent civilians was not the first time Blackwater has been involved in this kind of incident. It was recently revealed that Blackwater guards had previously killed 21 Iraqi civilians and wounded 27. The State Department has reported 56 shooting incidents involving Blackwater USA in Iraq this year alone.

And yet, it remains unclear whether or not the “sovereign” Iraqi government has the “authority” to expel Blackwater from the country. Former U.S. proconsul Paul Bremer, who headed the Coalition Provisional Authority that governed Iraq after the fall of Saddam, passed “Order 17” before “handing power” to the Iraqis in 2004, an order which guarantees immunity from prosecution for private contractors, including his own private Blackwater guards.

The latest incident was too much even for the puppet government of Al-Maliki. But after initially “expelling” Blackwater from the country, the Iraqi government had to back off. Blackwater is such an integral part of the occupation that without them, the security situation would deteriorate even more quickly. They now say that Blackwater’s license to operate in Iraq expired on June 2, 2006, meaning its employees are no longer immune from prosecution. They now want the U.S. to terminate all contracts with Blackwater in Iraq within six months and pay $8 million in compensation to each of the victims’ families. This situation underlines the true relationship of forces in the new “free and democratic” Iraq. The fact is, the Iraqi government is entirely at the mercy of the U.S. imperialists and their hired guns.

But who really controls these forces? Even from the perspective of the ruling class, the widespread use of mercenaries has gotten out of control. Former Ambassador to Iraq Joseph Wilson thinks “it’s extraordinarily dangerous when a nation begins to outsource its monopoly on the use of force and the use of violence in support of its foreign policy or national security objectives. [This] makes [private security contractors] a very powerful interest group within the American body politic and an interest group that is in fact armed. And the question will arise at some time: to whom do they owe their loyalty?”

Blackwater mercenaries – specialists in protecting private property through the use of overwhelming force – were among the first sent into New Orleans after the Katrina disaster. There is talk of privatizing the Border Patrol as well. This is not the distant future, but the very real present. Capitalism has nothing to offer the world working class but repression of the majority and mega-profits for the few; or at least, to the highest bidder.