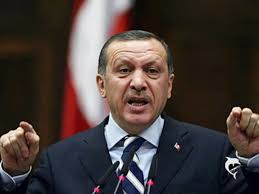 For the first time, Turkey has launched a direct military intervention in Syria, sending tanks and warplanes across the border in a coordinated campaign with Syrian opposition fighters and targeting positions held by ISIS, especially the strategic town of Jarablus.

This is the first time that Turkish ground forces have carried out a military operation of this magnitude across the Syrian border. A brief incursion early last year—supposedly to “rescue” the tomb of an ancestor of the founder of the Ottoman Empire—was never meant to lead to direct Turkish military intervention in the conflict, but was merely a stunt by Erdogan to boost his credentials as a strong man.

The operation, called “Euphrates Shield,” officially claims to be directed against ISIS in retaliation for the recent attacks and bombings carried out by the Islamic State within Turkey. The official line put by Foreign Minister Çavuşoğlu is that Turkey wants to clear out ISIS from the border, in order to prevent the infiltration of ISIS fighters into Turkey.

The move of taking over the town of Jarablus, the last major strategic position held by ISIS on the 500-mile border, would seem to confirm that. But it cannot explain why Turkey has allowed ISIS to use its territory for several years in which the regime has also used ISIS-linked terrorists to attack Kurdish and opposition forces inside Turkey itself. It is quite clear that the decision to resort to direct military intervention in Syria was taken in order to prevent the consolidation of a large area under the control of the Kurdish YPG in Northern Syria, which poses an existential threat to the interests of Turkish capitalism.

The YPG has almost complete control of Northeast Syria. Even more worrying, from the Turkish government’s point of view, is the potential establishment of a Kurdish-controlled area west of the Euphrates, after the US-backed Syria Democratic Forces alliance (SDF), which is dominated by the Kurdish YPG, captured the city of Manbij, just south of Jarablus, from Islamic State earlier this month. 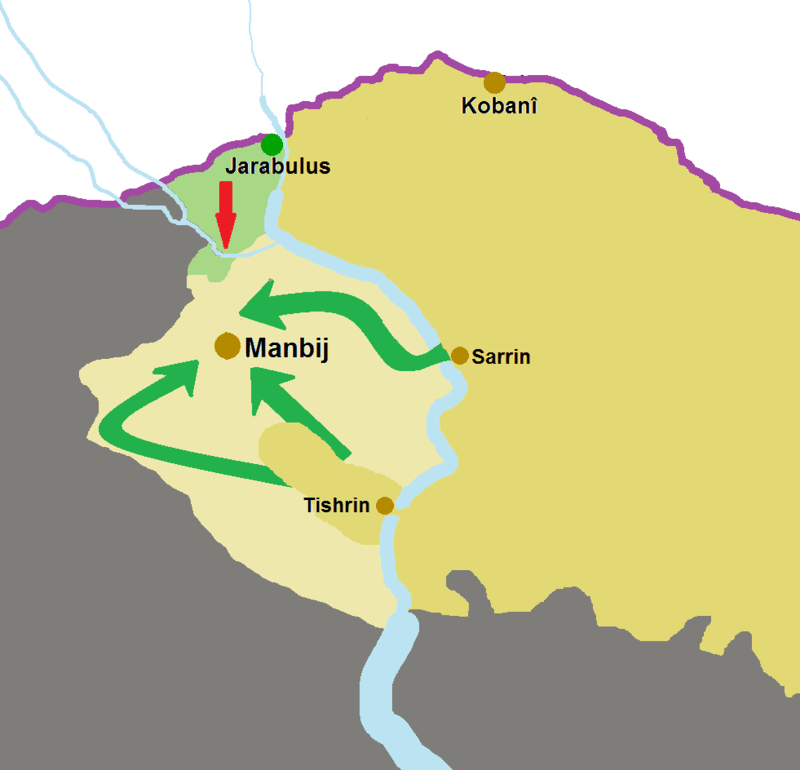 US officials have acknowledged that Turkey had not been happy about the Manbij operation, but promised that the Kurds would pull back once the city was cleared. The problem is that the YPG constitutes the vast majority of the the SDF, and they seem in no hurry to move out of Manbij, in spite of US pressure. This was reiterated by US Vice President Joe Biden, who is visiting Turkey, just hours after the offensive was launched.

This is an extremely unwelcome development from the point of view of the Turkish government, which has always considered the Euphrates to be a red line never to be crossed by Kurdish forces.

As we have pointed out in previous articles, the relationship between the Turkish army and the Erdogan government has never been an easy one, with the Turkish army representing a different power base than the Anatolian bourgeois and petty-bourgeois base of Erdogan’s AK Party. Over the years Erdogan has attempted several purges of the army in order to garner more direct control over it.

The failed coup attempt of July 15 was described by Erdogan as a “gift from God.” It gave him the opportunity, which he seized with both hands, of launching the biggest ever purge of the army ranks, from top to bottom. Erdogan’s countercoup was carried out in a matter of days, dismissing and jailing tens of thousands of officers and soldiers from the high ranks to the middle and lower levels.

The attempted coup also pushed Erdogan into a closer relationship with the old foe, Russia, on an international scale, after blaming the US government for their lukewarm attempt at not taking sides during the coup. In fact, Erdogan accused the US of being involved with and protecting the coup plotters and hosting the alleged master minder of the coup plot, Fethullah Gülen, on US soil.

Whether the accusation of US complicity in the coup has grounds or not is irrelevant. But it is clear that many of the coup plotters were deeply involved in NATO structures. After the failed coup these people were left in place by NATO. In the context of extremely strained relations between the White House and the Turkish government, this brought the pent-up tensions to the surface.

For some time the US imperialists have been extremely critical of Erdogan’s foreign policy, and the recent refusal to support Turkish claims of being backed by NATO—should there have been a military confrontation with Russia at the time of the downing of the Russian warplane over Latakia in November by the Turkish airforce—showed that US patience with their ally was running short. Erdogan received this whole affair as a humiliating slap in the face.

This revealed the diverging interests of the two ruling classes, especially in relation to what to do in Syria. Whereas Turkey wished to pull the US into a direct intervention to overthrow Assad, the Americans were not ready to replicate their failures in Iraq and Afghanistan. In fact, throughout the region they came to rely more and more on Iran, Hezbollah, and Kurdish YPG forces. Tensions have therefore been rising to unprecedented levels, leading to violent direct clashes between Turkish- and US-supported groups in Northern Aleppo over the past year.

The attitude of US diplomacy in relation to the July 15 attempted coup revealed that US officials were cautiously hedging their bets on the coup outcome in an attempt not to alienate an important section of the Turkish army, which is traditionally more open to collaboration with the US than Erdogan and the AK Party. The final result of this effort, however, has been that of further alienating Erdogan himself.

Turkey’s deal with Iran and Russia

The frictions between the Turkish government and the US over the coup served as the natural background for a shift in Turkish policy over Syria. The converging interests of Russia, Iran, and Turkey towards a settlement in Syria, based on cutting off the US from having a major say in the Syrian conflict, has cemented a deal between the three powers that has broader implications for world relations. Turkey has the second-biggest army of NATO and covers a huge part of its strategic southeastern border. A major crisis within NATO is inherent in this situation, and the US ruling class is well aware of this.

Therefore they are forced, just like in the case of the Saudi war on Yemen, to once again accept a fait accompli which is contrary to their strategy and interests in the region. They are caught between the need to support the Kurdish militias in Syria, which are the backbone of the US-backed SDF, and the need not to further alienate the Turkish ruling elite. It is more than possible that, in case of a direct conflict between the Turkish army and the YPG, the US will have to make a choice and turn their backs on their Kurdish allies.

The purge of the army after the coup and the ruthless suppression of internal opposition has brought about a temporary stabilization of Erdogan’s regime, which he is now trying to consolidate by resorting to a more aggressive approach towards the Syrian conflict and the Kurdish liberation movement, both in Syria and at home.

The Turkish direct military intervention in Syria is aimed at undermining the consolidation of a de facto independent Kurdish territory controlled by the YPG in the Syrian northeast, right by the Turkish border. It also has the aim of further militarizing the Kurdish question within Turkey itself. Erdogan’s cynical calculation is to undermine the growing opposition to his regime and undercut the possibility of an explosion of the class struggle in Turkey by artificially escalating the conflict against the Kurds as an open military conflict. The desperate bid by Erdogan to cling to power is threatening to push Turkey and the whole region towards an even deeper crisis.