Executed for Sleeping While Black: Justice for Amir Locke! 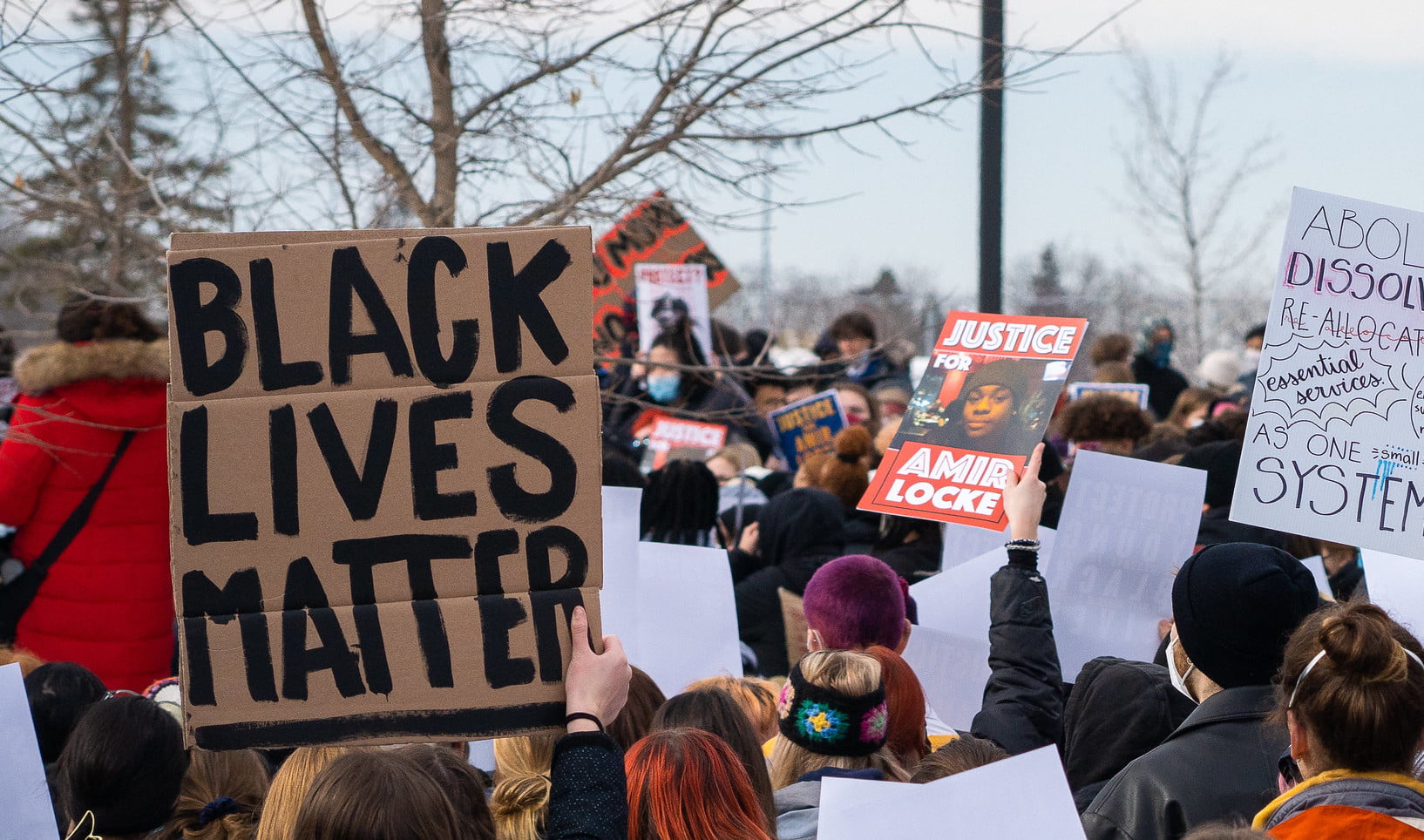 On the morning of February 2, members of the Minneapolis Police Department’s SWAT team broke into a downtown Minneapolis apartment unit on the basis of a “no-knock warrant.” Nine seconds later, officer Mark Hanneman shot and killed 22-year-old Amir Locke, who had been sleeping on the couch. The warrant was not for Amir, but his life was ended in circumstances similar to the 2020 murder of Breonna Taylor in Louisville.

In the first press conference after the shooting, Interim Police Chief Amelia Huffman referred to Amir Locke as a “suspect” in a homicide case, attempting to provide cover for the police murder. Democratic Mayor Jacob Frey stood alongside her while she made this claim. The same day, the Minneapolis Police Department (MPD) claimed in a press release that Amir was “armed with a handgun pointed in the direction of officers.”

It took a full day for the body camera footage of the shooting to be released, exposing the MPD’s barefaced lie. The footage shows police barging into the apartment with guns drawn. They immediately find Amir sleeping under a blanket, and deliver a loud and forceful kick to the couch to wake him up. In the same instant, a startled Amir reaches for a gun—which he had purchased legally for his own defense—while keeping his finger off the trigger and the gun pointed at the ground. Before Amir can utter a word or even pull the blanket off from over his head, police fire three rounds point blank.

Merely holding a firearm is not against the law and should not lead to anyone’s murder. But this rule doesn’t seem to apply if an MPD officer sees a sleeping Black youth. Amir was a registered gun owner with no criminal record. He had purchased a firearm for his own safety after taking a job as a DoorDash delivery driver. After viewing the footage, his mother said “My son was executed on 2/2 of 22 … and now his dreams have been destroyed.”

As expected, the ruling-class media has tried to shift the focus from the horror of state-sanctioned murder. This time, they are focusing on Locke’s cousin, a 17-year-old who is apparently the “real” suspect in the homicide case, whom state prosecutors plan to try as an adult.

But what about the murderer, who shot a young man to death? As of this writing, officer Hanneman has been placed on paid administrative leave, but has neither been fired nor charged with a crime. This is the justice that the capitalist state has to offer: not even a slap on the wrist.

The liberal media has attempted to portray the Minneapolis city administration as having “learned its lessons” since the murder of George Floyd. This was shown by Derek Chauvin’s guilty sentence. On the other hand, the liberals say the city council is acting “more maturely” now that they have distanced themselves from the “radical” slogan of “defunding the police.” However, the rot at the core of every institution in the city remains intact. Hennepin County District Court Judge Peter Cahill, who presided over the Derek Chauvin trial and is celebrated by the media for his “decency,” is the same judge who approved the “no-knock warrant” that led to Locke’s murder.

Like the killing of Breonna Taylor, this tragic event is yet another reminder that the capitalist “justice” system cannot be trusted to protect Black lives. The racist nature of policing is a consistent feature of US capitalism, no matter what state you live in. The police exist as a tool of oppression and repression, targeting Black workers and youth who have been forced by this system into some of the worst living conditions suffered by any group of people in the advanced capitalist countries. The constant arrests, targeting, surveillance, and other fear tactics are intended to intimidate and demoralize Black people into accepting these conditions. Police use the excuse of “fighting crime” in order to keep poor and working-class neighborhoods in a state of constant fear and paralysis.

Just 20 months removed from the largest protest movement in US history, the Democratic Party and the bourgeois media have combined a “law and order” message with a fear-mongering campaign about rising crime. Long gone are the empty promises to reform or “re-imagine” the institution of policing. Far from “defunding” the MPD, the city gave the department an even bigger budget this year, after leaving it essentially unchanged between 2020–21.

On the national level, Biden has spearheaded the “law and order” campaign, calling for greater funding for police departments across the country in response to the growing “crime wave.” Both the Democratic and Republican parties are in sync with their messaging on this question, which is blasted from Fox News to MSNBC.

The chaos of the botched pandemic and the devastation of the latest “once-in-a-lifetime” economic crisis have exacerbated the many symptoms of social decay since 2020. This is manifested in many ways, from a spike in traffic accidents to an increase in violent incidents, especially in the poorest neighborhoods. The ruling class is capitalizing on the rising crime statistics to whip up fear and prejudice, while shoring up funding and support for the institutions that protect their interests. If there’s anything they learned from the mass movement of 2020, it’s that they need the instruments of police terror to be in top shape, well funded, and well armed—not only for the everyday targeting of the poor and oppressed, but also to stand by for the next eruption of social discontent.

Since the murder of Amir Locke, thousands in Minneapolis have protested against the state’s actions. Through a call on Instagram initiated by the MN Teen Activists, a youth nonprofit, a rally was organized on February 8. Over a thousand elementary, middle, and high-school students across the state of Minnesota rallied for Justice for Amir, converging on Central High School in St. Paul and marching to the governor’s mansion. For many participants, such protest actions are an increasingly common experience. The recent rallies came just weeks after the students’ walkout for safe and healthy schools in the Twin Cities on January 18, during the Omicron surge.

Rallies for justice for Amir have also been held in downtown Minneapolis and St. Paul. Protestors have called for the firing and prosecution of officer Hanneman, as well as the resignation of both Mayor Frey and Police Chief Huffman. In light of the circumstances of Amir’s murder, these protests have also raised calls for a ban on no-knock warrants, which allow police to bust down doors or break into homes with prior notice or announcement. The practice, generally considered a “high-risk tactic” even by law enforcement sources, became common during the so-called “war on drugs” in the 1990s and 2000s. Today, some 60,000 of these violent operations are carried out each year, approximately 140 of them by the MPD alone.

So far, Mayor Frey has only put a temporary “pause” on no-knock warrants, an empty gesture which he made in the past, in a theatrical attempt to show the city was “taking action.” During his reelection campaign, the Democratic mayor even falsely claimed to have “banned” no-knock warrants—a blatant lie.

Similar to other recent policing “reforms” like chokehold bans, ending the practice of no-knock warrants would surely save some lives while also depriving police of one of their tools of terror. But such policy proposals fail to draw the real lesson of 2020 and the George Floyd movement: the police are not reformable. The entire institution must be uprooted, and for that, a mass movement in this direction must be the beginning of a revolutionary struggle to completely transform society.

The capitalist state will not legislate away the practices that allow its enforcers to effectively fulfill their tasks of violent repression. Even if such laws are passed, there is no entity that can force the police to abide by them. Cops know they will be treated with kid gloves, especially as politicians from both ruling parties fall over themselves in their defense of “law and order.”

Likewise, calls for the resignation of the mayor and the police chief fall short, since they would only replace one loyal protector of the state machinery with another. An institution premised on racist violence can never be made to work “for the community.”

For a revolutionary class struggle against racism!

Only the organized might of the working class has the power to bring about an end to racist killings and police terror. This power was in full view of the world in June 2020, as millions poured into the streets of every city from coast to coast.

Just think how police would change their day-to-day operations if the authorities knew that every murder of a Black youth would met by mass student walkouts and workers’ strike action? This is a question that every worker should ask the Twin Cities AFL-CIO leadership. So far, the labor leaders have refused to put out a statement, much less mobilize for a fight against police terror.

The strategy of pursuing gradual legal changes to policing leads only to demoralizing failure. But a militant labor movement committed to defending Black lives—linking the struggle against police terror to the urgent demands of the entire working class—could bring about a fundamental change. The fight to rid humanity of racist policing cannot be separated from the fight to uproot all the other ways in which capitalism brutalizes the oppressed and maintains inequality—from housing, healthcare, and education, to employment, wages, and conditions in the workplace.

A bold strategy of class struggle against racism is the way forward, if we are to get even a sliver of justice for those who have been murdered by the capitalist state. Members of Socialist Revolution are putting forward this perspective on the streets of the Twin Cities and across the county, and we are confident that in time, millions more will come to these conclusions. Join us in the fight for revolutionary change—and help us speed the day for real justice.