Karl Marx is Alive and Kicking! 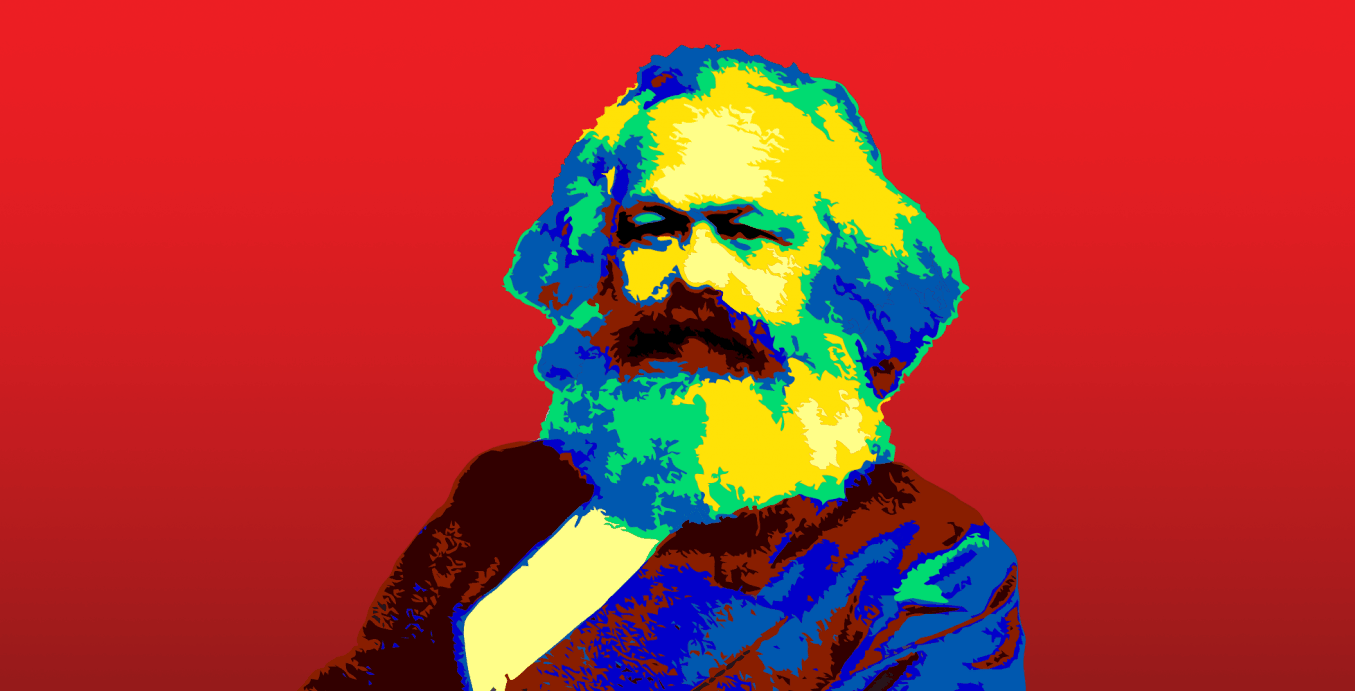 Two centuries ago, a child was born whose very name would cause the world’s ruling classes to tremble at a communistic revolution. And yet, despite their century-long efforts to discredit, mock, and distort him, Karl Marx’s specter continues to haunt them. The reason is simple: Marx was right! More than ever, his books, pamphlets, speeches, notes, and letters provide an unparalleled wealth of ideological and practical tools for the working class in its struggle for a better world.

Take, for example, the Communist Manifesto, first published 170 years ago as revolutions erupted across Europe. Every line is pregnant with meaning as Marx and his lifelong friend and collaborator Engels guide us through capitalism’s genesis and spread across the planet. In muscular yet lyrical prose they sketch the internal contradictions that will in time lead to the system’s revolutionary overthrow by the very working-class “gravediggers” its profits depend on. 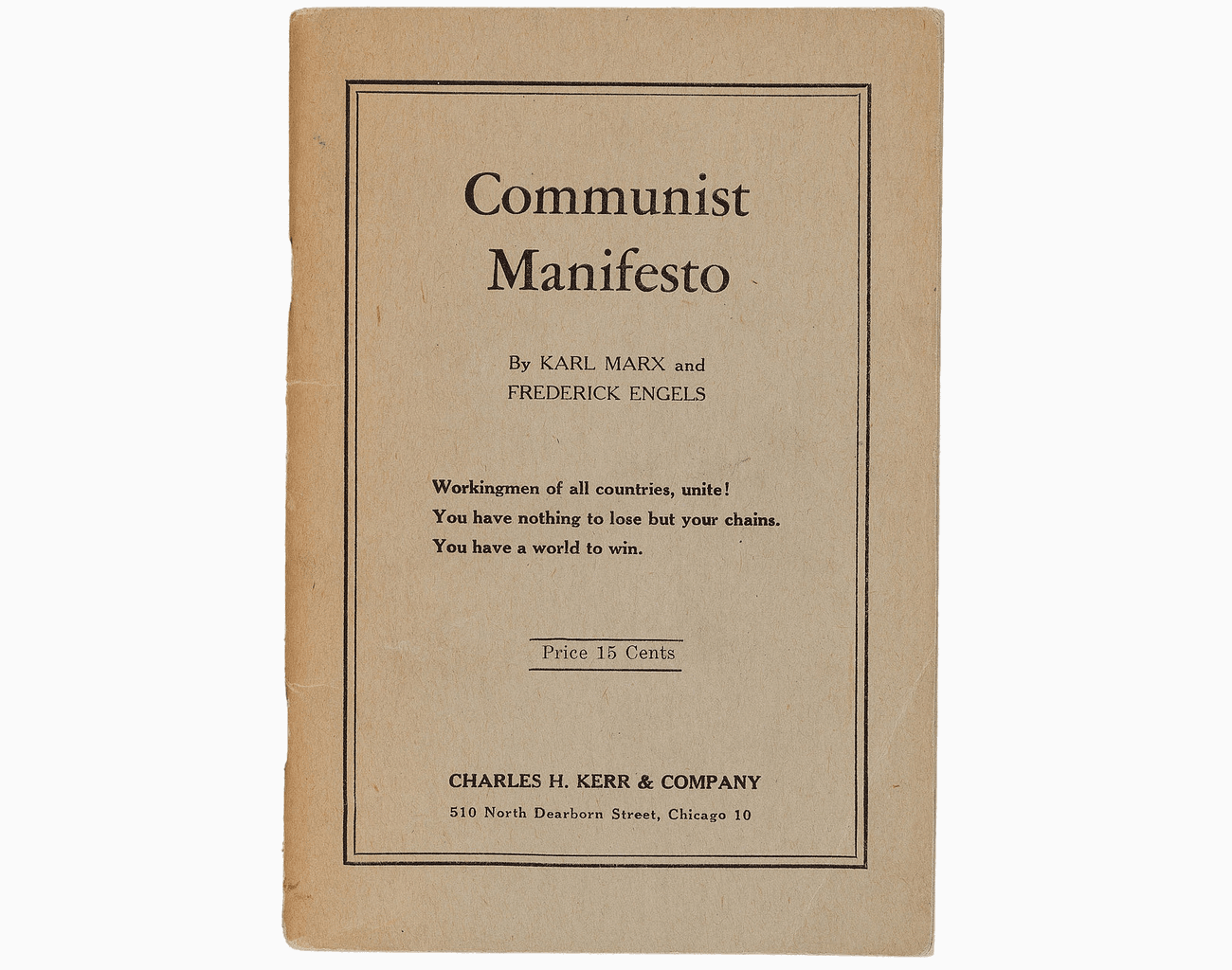 In the Commuist Manifesto, Marx and Engels revealed the essential dynamics and contradictions of the capitalist system.

In its pages is an extraordinary anticipation of a world that was only discernible in outline when it first rolled off the press. Composed in a revolutionary era of railroads and telegraphs, some may question its applicability to a world of space travel and the Internet. But in all fundamentals, capitalism and the class relations described in the Manifesto remain the same today as when Marx began unraveling the inner workings of the system. By harnessing the analytical and explanatory power of materialist dialectics and voraciously reading the most advanced economic and scientific writing available in his day, Marx revealed the essential dynamics and contradictions of a system driven by the relentless quest for profits:

Constant revolutionizing of production, uninterrupted disturbance of all social conditions, everlasting uncertainty and agitation, distinguish the bourgeois epoch from all earlier ones. All fixed, fast-frozen relations, with their train of ancient and venerable prejudices and opinions, are swept away; all new-formed ones become antiquated before they can ossify. All that is solid melts into air, all that is holy is profaned, and man is at last compelled to face with sober senses his real conditions of life and his relations with his kind.

The means of production and of exchange, on whose foundation the bourgeoisie built itself up, were generated in feudal society. At a certain stage in the development of these means of production and of exchange, the conditions under which feudal society produced and exchanged, the feudal organization of agriculture and manufacturing industry, in one word, the feudal relations of property became no longer compatible with the already developed productive forces; they became so many fetters. They had to be burst asunder; they were burst asunder.

Once capitalism became the dominant mode of production on the planet, its trajectory was all too clear:

From the White House to the Vatican, all that was once considered “holy” has been profaned as one pillar after another of bourgeois domination loses its power over the minds of the masses. With an economic engine and political superstructure “no longer compatible with the already developed productive forces,” a far-reaching crisis of confidence and discontent is seeping into every pore of society as everything pushes inexorably towards the “bursting asunder” of capitalism itself, which became a fetter on human progress long ago.

In its epoch of terminal decline, the “everlasting uncertainty and agitation” of the system has a distorting effect on human relations, socialization, and physical and mental health. The Independent recently reported that

Six in 10 millennials claim to be going through a “quarter-life” crisis, according to a new study. Many of us are familiar with the trope of a mid-life crisis—a person in middle age who is feeling stuck in a rut, and who reacts by indulging in erratic behavior like making spontaneous career decisions or buying a motorbike. But now it seems more and more of us are evaluating our existence far earlier.

They go on to advise people to “1. Stop comparing yourself to others. 2. Take a step back and identify the root cause.”

At a time when three individual Americans own more wealth than the poorest 50% of their compatriots, is it surprising that tens of millions of us are “evaluating our existence” and taking “a step back to identify the root cause” of the never-ending crisis and instability, unpayable mountains of debt, and precarious “gig” jobs? 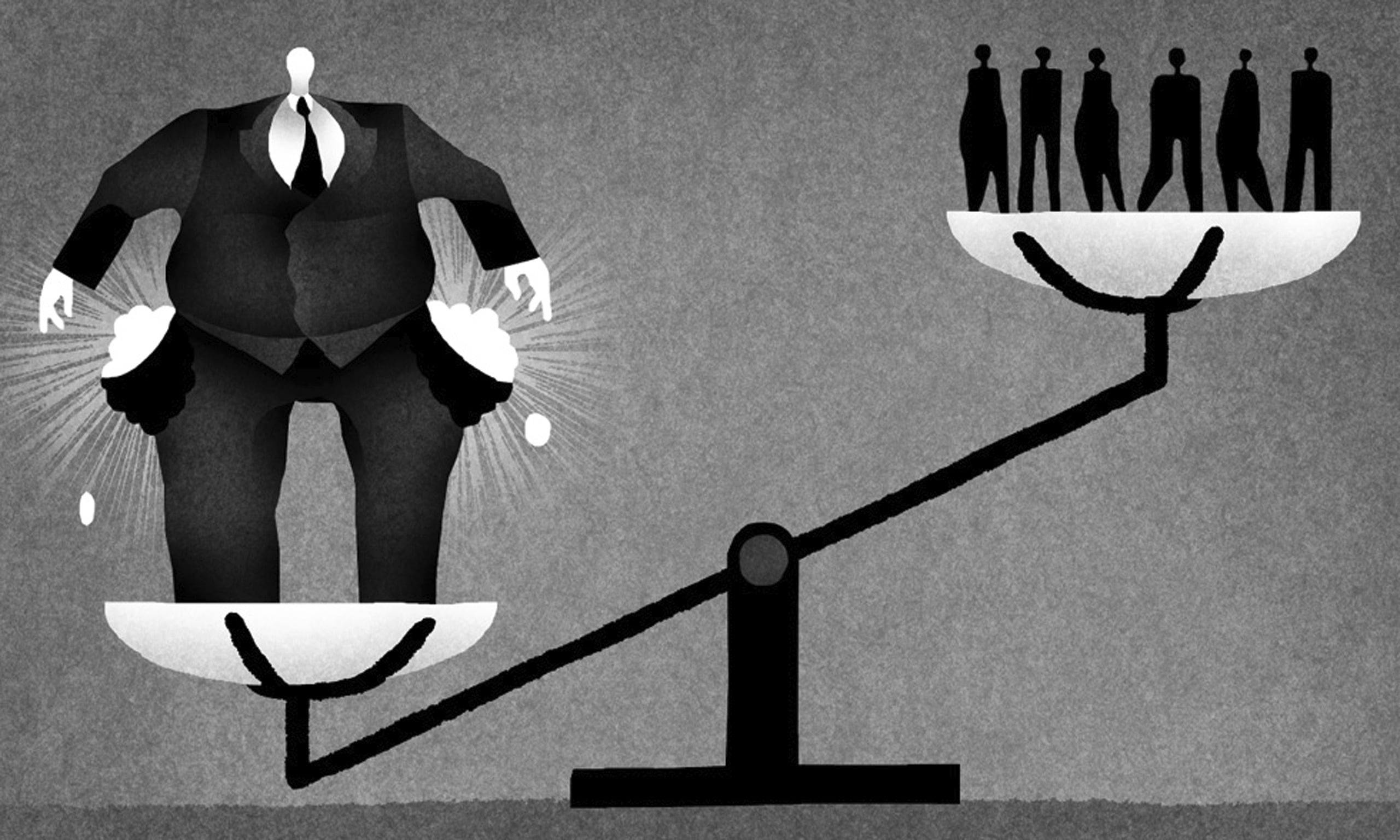 Three individual Americans now own more wealth than the poorest 50% of their compatriots.

A recent poll by Fox News found that 36% of all Americans said it would be a “good thing” for the country to “move away from capitalism to more socialism,” up from 23% in 2009. That more Americans are open to socialism a decade into the so-called economic recovery than at the height of the crisis speaks volumes. Gallup found that among 18-to- 29-year-olds, positive views of capitalism “had plummeted this decade, from 68% in 2010 to just 45% in 2018.”

As for “comparing yourself to others,” Marx explained in Wage Labor and Capital, one’s standing in society is, in fact, measured socially:

A house may be large or small; as long as the neighboring houses are likewise small, it satisfies all social requirement for a residence. But let there arise next to the little house a palace, and the little house shrinks to a hut. The little house now makes it clear that its inmate has no social position at all to maintain, or but a very insignificant one; and however high it may shoot up in the course of civilization, if the neighboring palace rises in equal or even in greater measure, the occupant of the relatively little house will always find himself more uncomfortable, more dissatisfied, more cramped within his four walls.

The capitalists and their apologists shamelessly claim they can increase wealth and happiness for all while they ruthlessly exploit and oppress the majority. But even Jeff Bezos, Bill Gates, Mark Zuckerberg, Warren Buffet, and the Koch brothers cannot square the circle. Billions of humans intuitively feel the disconnect between what is potential and what is actual and are desperate for a solution. The inspiring mass movements we have witnessed over the last few years are just one expression of this, and there are many more to come. Provided the working class builds the necessary revolutionary leadership, we will eventually see a successful socialist revolution in one country or another—which will spread like wildfire across the globe. 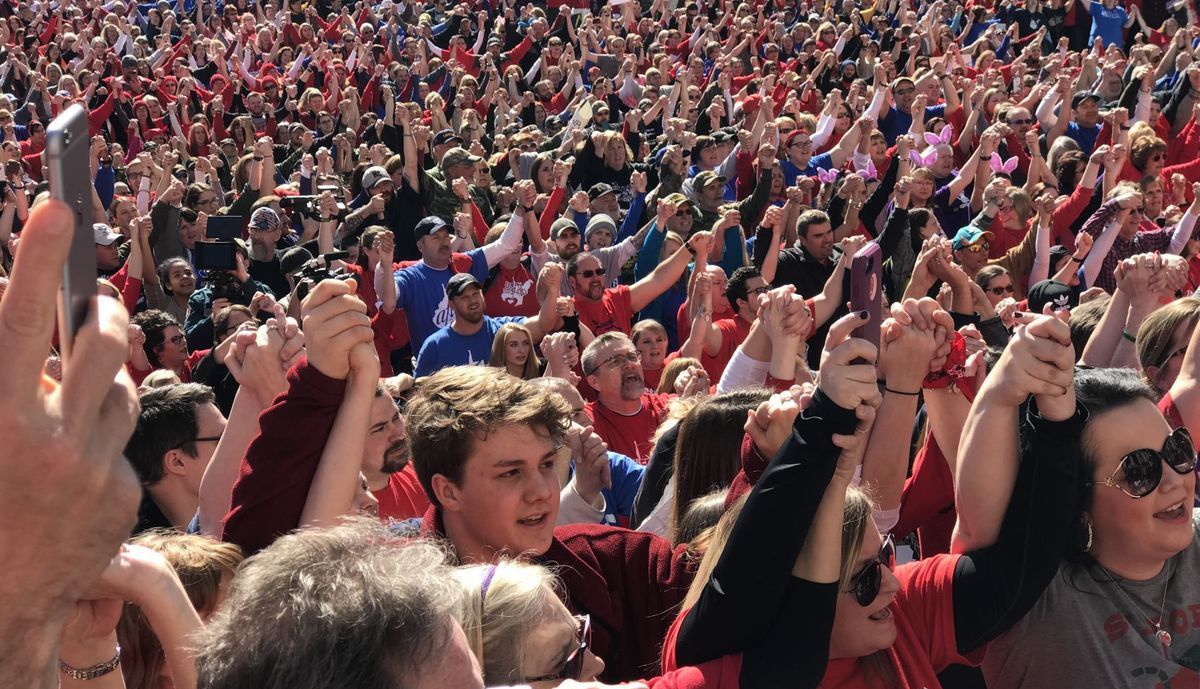 Today, billions of humans are desperate for a solution out of the exploitation and inequality that reigns over our lives.

Luckily for those of us lucky enough to be living today, a socialist world is not a pipe dream. As Marx explained in A Contribution to the Critique of Political Economy:

Mankind thus inevitably sets itself only such tasks as it is able to solve, since closer examination will always show that the problem itself arises only when the material conditions for its solution are already present or at least in the course of formation.

In the decades since those lines were written, the material conditions for socialism have ripened to a degree that even Marx could not have fathomed. Capitalism has had hundreds of years to prove what it can—and cannot—do. What it can do is condemn billions to misery, ignorance, and mindless drudgery while accumulating vast wealth in a few hands. What it cannot do is provide everyone with quality jobs, food, housing, healthcare, and education. Nor can it allow each and every one of us to reach our full potential. Marx was right because he was the first to point out that capitalism has not always existed and will not always exist, that it has developed within it the means by which a new form of society can be built, and that the way forward is a socialist revolution.

His mortal body may be dead but his ideas are very much alive. On one subject after another, his penetrating insight and razor-sharp wit are a beacon of clarity and confidence in the proletariat and the socialist future. He not only revolutionized philosophy, he revolutionized the international working class and offered a real way forward for genuine human liberation and freedom. To the end of his days, Marx remained committed to this perspective. In his final writings he reiterated the optimistic views of his youth:

The realm of freedom actually begins only where labor which is determined by necessity and mundane considerations ceases; thus in the very nature of things it lies beyond the sphere of actual material production . . . Freedom in this field can only consist in socialized man, the associated producers, rationally regulating their interchange with Nature, bringing it under their common control, instead of being ruled by it as by the blind forces of Nature; and achieving this with the least expenditure of energy and under conditions most favorable to, and worthy of, their human nature. But it nonetheless still remains a realm of necessity. Beyond it begins that development of human energy which is an end in itself, the true realm of freedom, which, however, can blossom forth only with this realm of necessity as its basis. The shortening of the working-day is its basic prerequisite. 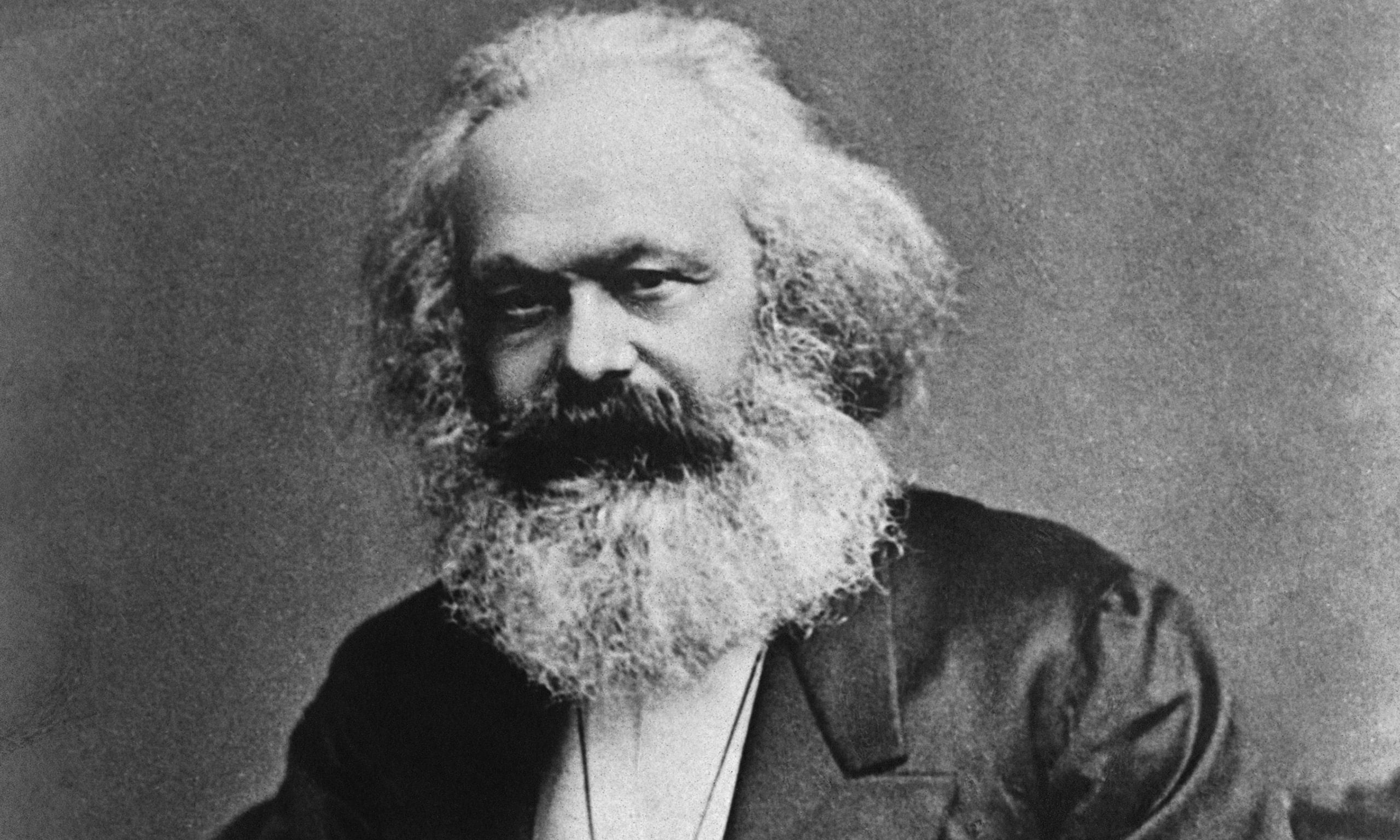 The International Marxist Tendency puts “Marxist” at the center of our ideas and activities.

We stand at a new turning point in the history of humanity. The choice before us is not “socialism or the indefinite continuation of the status quo,” but rather, “socialism in our lifetime or the end of the human species as we know it.” But there is no room for pessimism; the working class holds enormous power in its hands. Combined with a far-sighted leadership willing to transcend the artificial constraints of the system, the socialist revolution can be a reality much sooner than most people imagine—if we start building for it now.

The International Marxist Tendency literally puts “Marxist” at the center of our ideas and activities. We are committed to fighting alongside the working class to finish the work started by Marx and Engels. The new generation of revolutionaries must delve deeply into their ideas and work. It is not enough to read “about” Marx or to read this or that quote in isolation. There is no better time to dive into the incredible richness of Marxism, which is the synthesized experience of the working class and a guide to action for the socialist revolution. Why not start with the Communist Manifesto? Why not contact the IMT for a discussion? After all, “The proletarians have nothing to lose but their chains. They have a world to win. Workers of all countries, unite!”