[Leaflet] Class Struggle on the Rise: Labor Must Go on the Offensive!

This is the text of a leaflet distributed by supporters of Socialist Revolution at May Day demonstrations throughout the country. Download the PDF of the four-page foldable leaflet here. 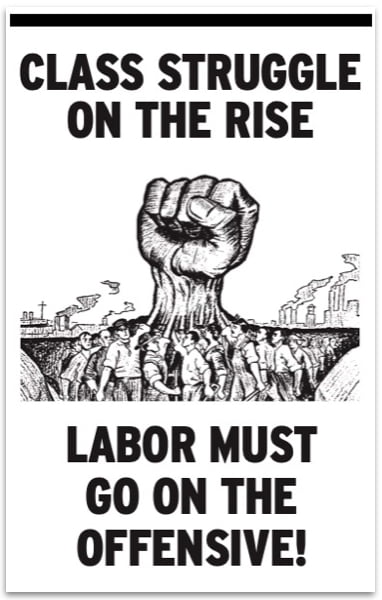 A battle is unfolding across the US. Foreshadowed by last year’s “Striketober,” a new kind of wave is sweeping workplaces across the country: a wave of unionization. The historic victory of Amazon workers who won union recognition at the JFK8 Fulfillment Center in Staten Island has added to the momentum. News of the first unionized Amazon warehouse in the US spread globally, capturing the imagination of workers around the world. Now these efforts are spreading to the neighboring LDJ5 facility.

Last December, workers at a Starbucks in Buffalo, NY began organizing and their efforts sparked a chain reaction that has spread to over 230 other locations with new stores filing union elections nearly every day.

The wave for union recognition is sweeping across the service sector with no signs of slowing down. Workers at an Apple store in Atlanta recently petitioned to hold a union election, with Apple workers in NYC preparing to do the same. This will be the first serious organizing campaign at Apple, which tops the charts as the world’s largest company by market valuation, at a staggering $2.7 trillion.

There is a clear sense of forward momentum for these campaigns, and the eyes of the entire working class are fixed on the battle to unionize the service sector—a gargantuan layer of the American workforce, encompassing some 100 million workers, or 71% of all non-farm payroll employees. For the first time in a generation, this battle has the potential to turn the tide for the labor movement—but only if it passes from organizing workers to organizing all-out class war.

Amazon is one of the largest and richest companies in the world, with the second largest private workforce in the US, enriching one of the wealthiest billionaires in human history. While Amazon profits literally send Bezos skyrocketing into space, his 1.6 million workers suffer some of the most atrocious and dystopian working conditions in the advanced capitalist world—policed by robots and productivity timers, denied adequate bathroom breaks, and performing back-breaking labor for up to 10 or 12 hours at a time.

With millions of American workers forced to endure similar conditions, it’s no surprise that the idea of unionizing Amazon workers has garnered overwhelming public support. An April 2022 poll found that 75% of Americans and 83% of people aged 18–34 support the effort to organize Amazon.

The stage is set for the labor movement to start a new chapter in its history. But winning union representation is only a first step in this battle. Achieving a real victory against the bosses when it comes to negotiating strong contracts and winning concessions at the expense of capitalist profits will require nothing short of a revolutionary strategy. Part of the task is to understand what led to labor’s protracted decline since the postwar period.

It was the militant tactics of Marxist and communist organizers that produced the victories of the ‘30s and ‘40s, and gave rise to what was once the largest labor movement of any capitalist country. In the decades after World War II, more than a third of the national workforce was organized, and 40 years ago, some 18 million workers were in unions. Since then, the share of workers in unions has fallen by half, to a mere 6.2% in the private sector.

For the US labor movement to reverse the decades-long string of defeats, expand its ranks by tens of millions, and regain its position as the formidable organization of one of the largest working classes in the world, it will have to break with the failed policies and methods that led the unions into decline. This starts with recognizing that the interests of the workers and the bosses are irreconcilably opposed, and that the institutions of the state—including the NLRB and the Department of Labor—are not neutral. The courts and police forces of the federal, state, and local governments exist to defend the interests of the bosses. Marx described the modern state as “a committee for managing the common affairs of the whole bourgeoisie.”

Unions themselves were once illegal, and workers were forced to defy the law in order to strike and win. In the wake of the major victories in the heyday of the labor movement, the ruling class made every kind of effective strike activity illegal, including solidarity strikes, political strikes, sit-down strikes, workplace occupations—in short, any strike that actually works by shutting down production and stopping scabs in their tracks. Playing by the bosses’ rules is a recipe for defeat!

If it seemed that Amazon was throwing everything they had into the fight over the initial union vote, just imagine how they will approach the fight over the first contract negotiations! Management will do everything in its power to drag this process out and wear down the resolve of the pro-union workers. The stakes will be raised tenfold as both sides recognize that the workers’ first contract will shape the debate over unionizing future Amazon facilities.

In reality, the livelihood of the entire working class is at stake in this battle. The elected leadership of every union in the country should be preparing an all-out offensive to mobilize the entire membership in support of the Amazon workers, as well as the unionizing drives at Starbucks and other workplaces. Mass rallies and marches should be organized in every major city to put this battle front and center in the minds of the entire working class, to make it clear that this fight is their fight, too. The resources of the entire labor movement should be thrown into organizing every major employer, including Walmart, which has an even larger workforce than Amazon, and a similar degree of exploitation.

Such resources should also be poured into building a class-independent workers’ party, armed with socialist policies that would benefit our entire class. Both the Democratic and the Republican parties are instruments of the ruling class—the workers need an independent, mass party of our own! Mobilized and organized at the workplace and in politics, there is nothing that can stop the united working class.

This kind of offensive would draw the hatred and slander of the bosses, their political representatives, and the mainstream media. So be it! Because it would also inspire millions of workers and give them a sense of their colossal potential power. For half a century, the union leaders have timidly retreated under the pressure of the capitalist onslaught, giving up one concession after another with every new contract. It’s high time the working class hears a different kind of message: we can fight back and win!

If you agree with this perspective, help us bring revolutionary ideas into the labor movement and join the International Marxist Tendency! We are a revolutionary organization based on the ideas of Marx, Engels, Lenin, and Trotsky, with a presence in over 40 countries, and 70 cities across the US. We fight for the overthrow of capitalism and the establishment of a workers’ government. There has never been a better time to join the fight for socialism in our lifetime, so don’t stand on the sidelines!

Class struggle is the way forward!