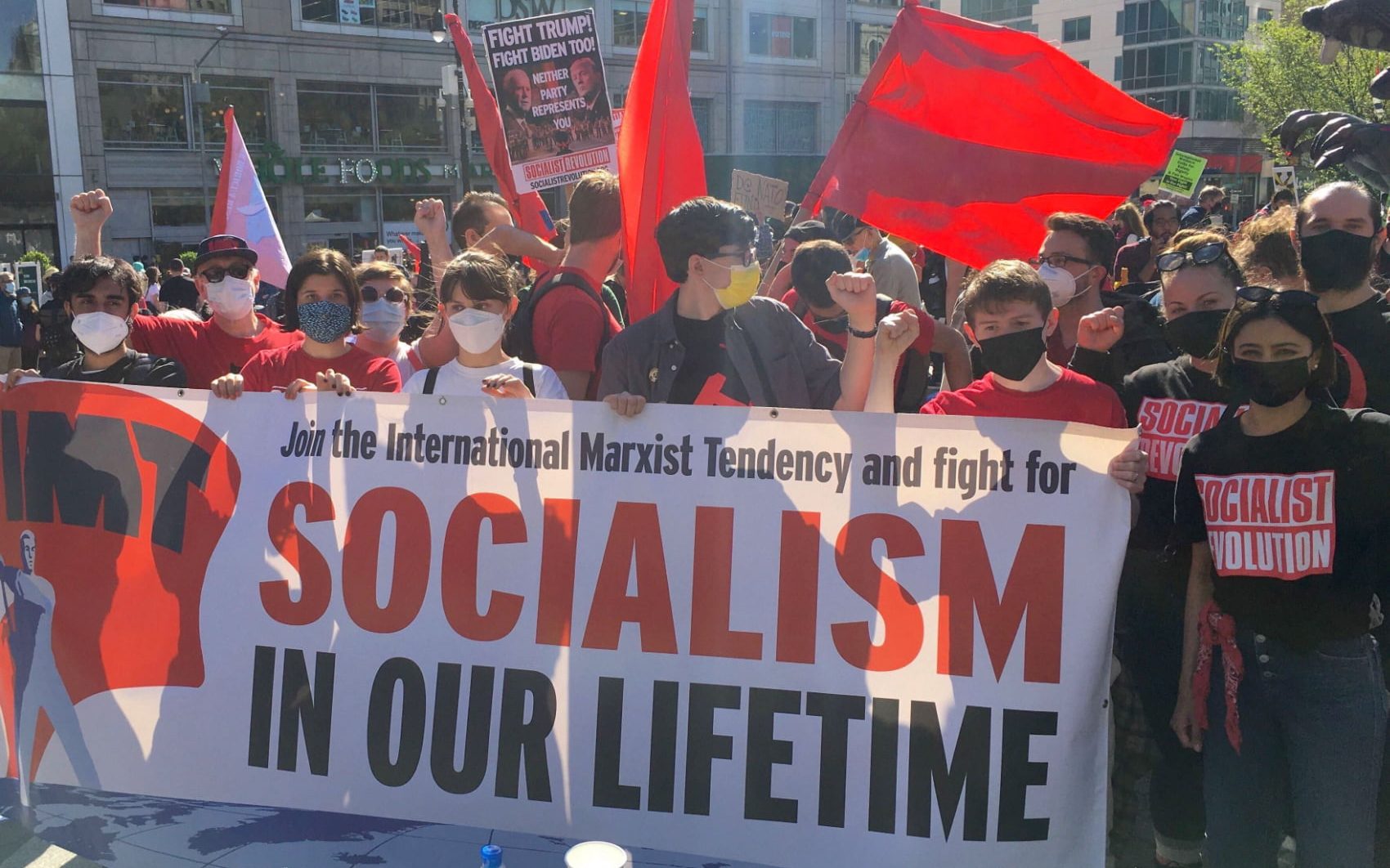 This year, May Day was marked by the barbarism caused by the ruling class’s handling of the pandemic and the crisis of capitalism. A massive, subterranean build-up of anger has taken place worldwide. From El Salvador to Austria, Nigeria, or Pakistan, comrades of the International Marxist Tendency took part in May Day events worldwide—organizing and joining protests to provide a revolutionary way out of this impasse!

In the US, many of the labor traditions around May Day have been lost. International Workers’ Day actually originated in this country to commemorate the Haymarket massacre in Chicago and the struggle for the eight-hour day. The “official” Labor Day in September was consciously chosen by the ruling class in an effort to erase this history and cut across socialist and working-class militancy.

This year, the comrades of the US section of the IMT made a strong showing to reclaim the legacy of May Day as the real labor day—raising the flag of revolutionary Marxism in more cities than ever before.

Get in touch with us and join our comrades in the fight for socialism in our lifetime!

In New York City, dozens of comrades participated in two different rallies in downtown Manhattan, one in support of laundry workers who had been locked out by their bosses and a demonstration of City Hall public sector workers. They later joined the main May Day rally in Union Square in Manhattan. They set up book stalls, distributing fliers and booklets—and selling over 100 copies of Socialist Revolution magazine! The comrades later joined in a march to protest against Jeff Bezos in front of his Manhattan penthouse. They had huge success putting forward an internationalist revolutionary program for the fight against capitalism! 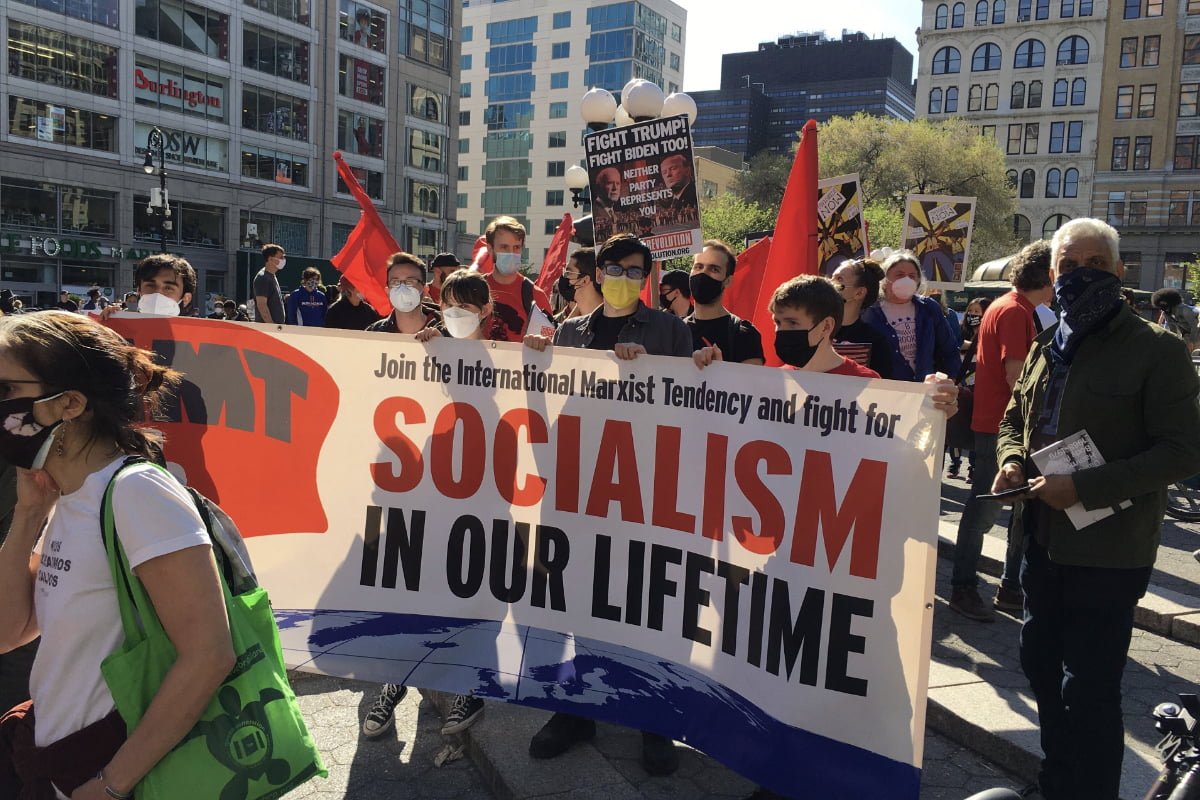 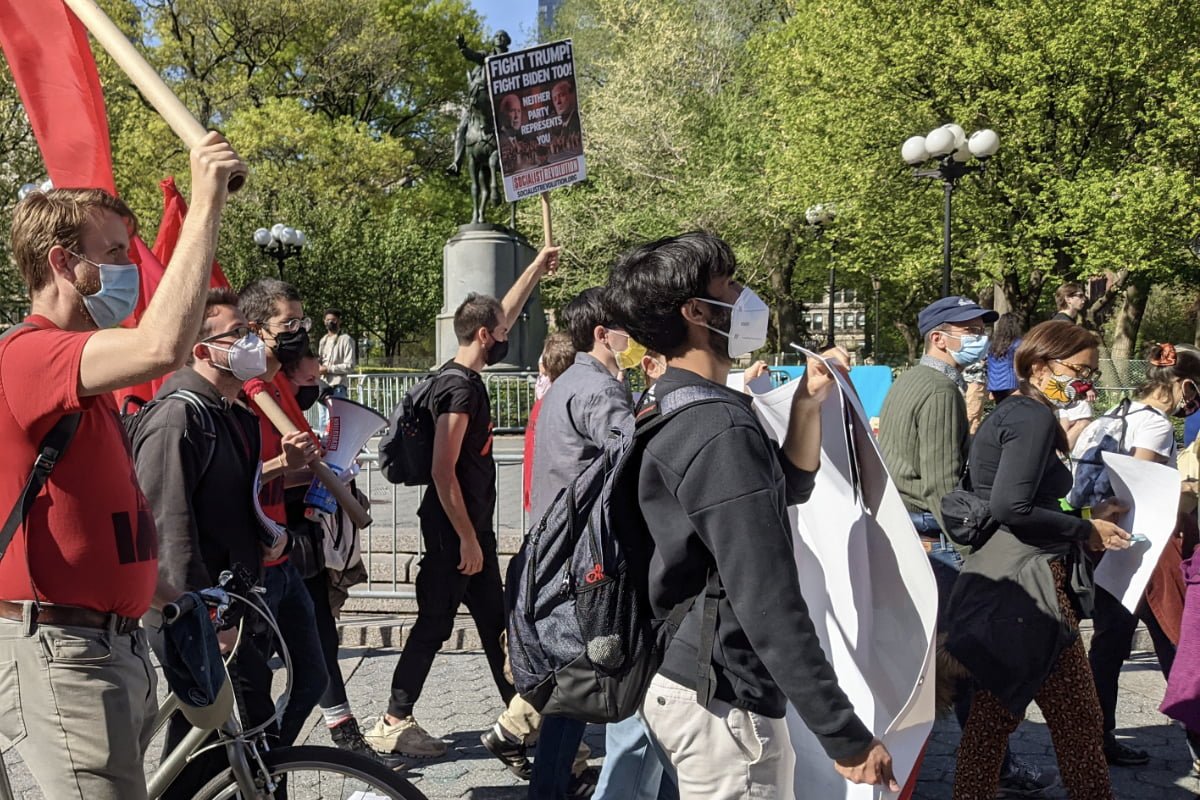 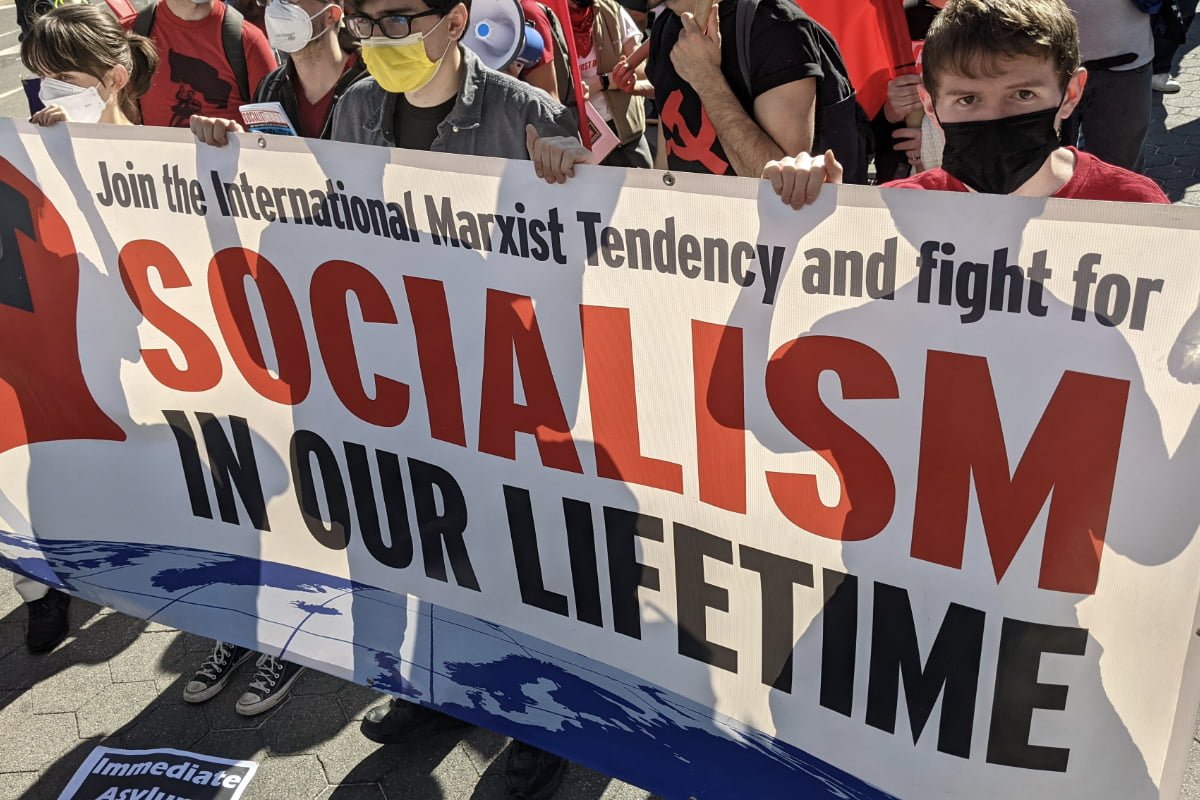 The Minneapolis comrades participated in a May Day march, which was attended by other left organizations, as well as some union workers such as SEIU and the Minnesota Federation of Teachers. After the powerful Black Lives Matter movement and recent protests during the trial of George Floyd’s murderer, many people were looking for the revolutionary socialist ideas that our comrades put forward distributing many leaflets, booklets, and magazines. 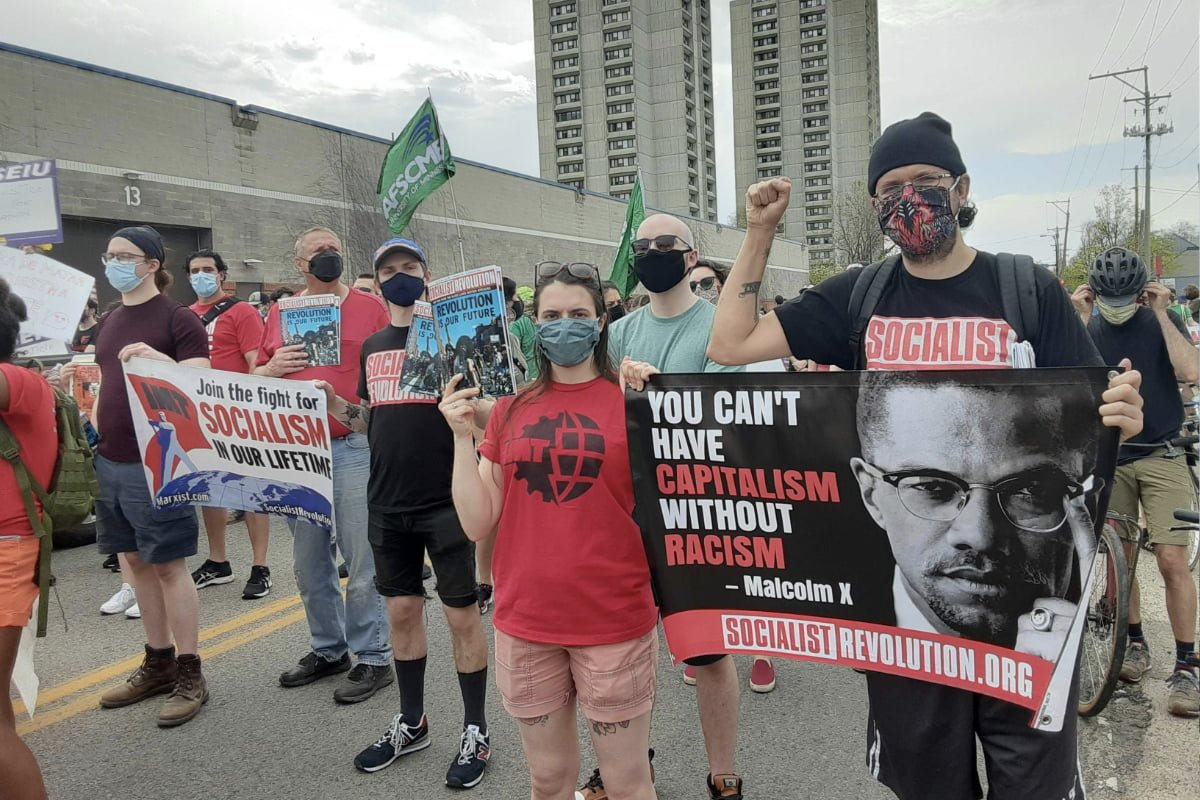 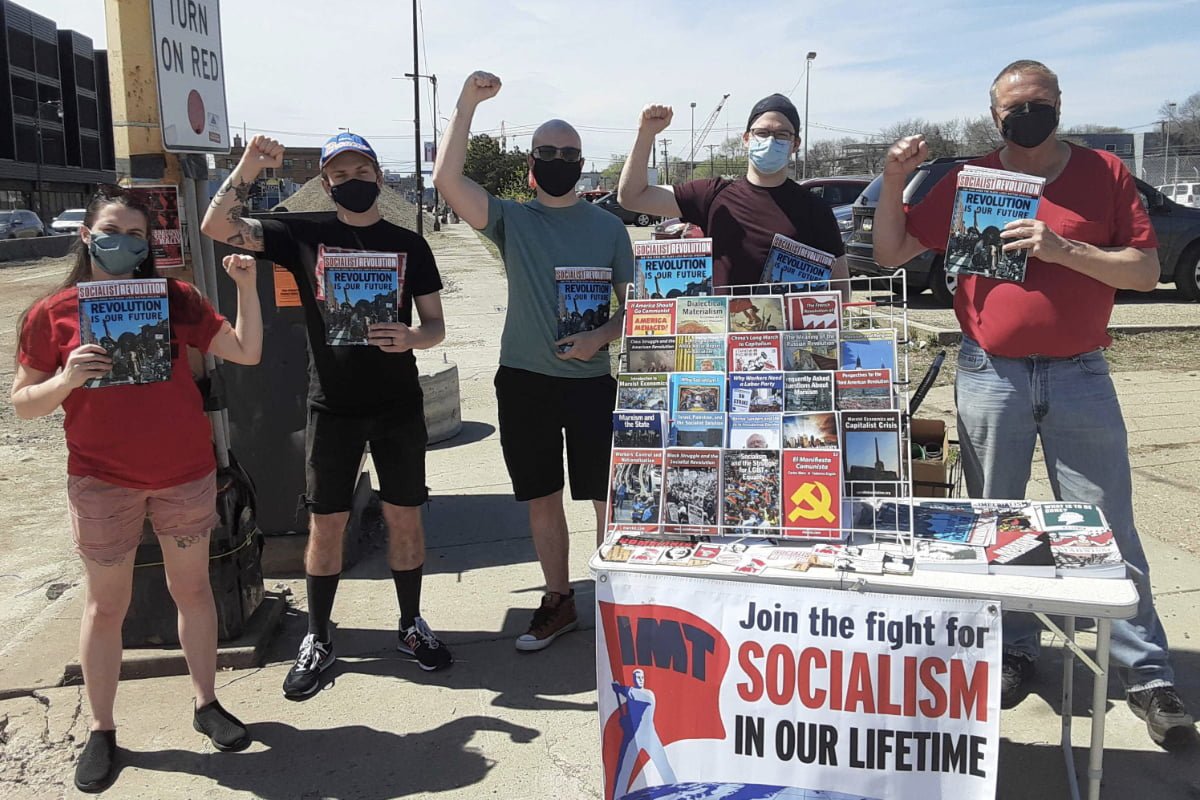 The comrades in Boston set up a stall at the regular May Day event that takes place in the Boston Commons. They then marched to Nubian Square, where they had a lot of success engaging with people politicized since the pandemic and looking for a revolutionary organization. A comrade gave a militant speech which was very well received, commemorating the Black Lives Matter uprising in 2020 and putting forward the demand for an independent mass working-class socialist party. 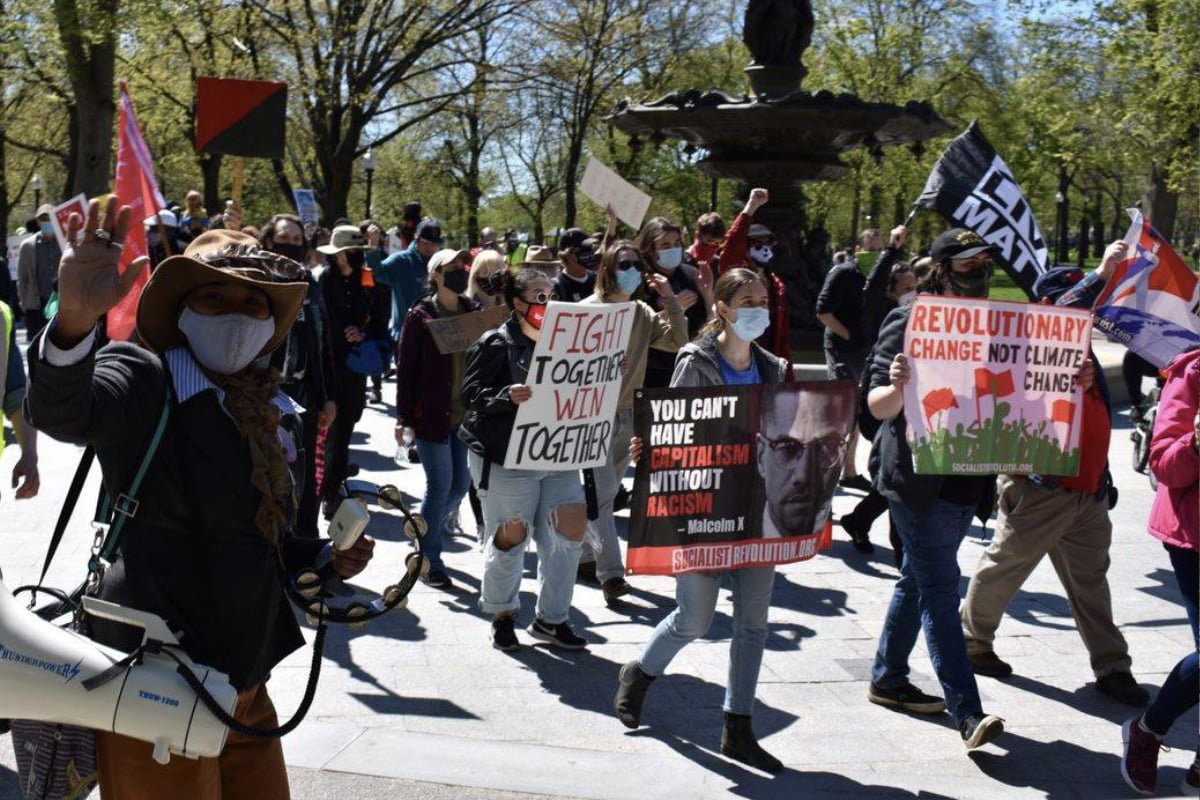 In Phoenix, the IMT took part in a car caravan and rally organized by DSA in support of the PRO Act. It had a peak attendance of approximately 70 people, including members from DSA and local unions CWA, AEU, and IUPAT. The event was big enough to attract two reactionary counter-protesters, and the comrades met many people enthusiastic about Marxism and the organization.

In Milwaukee, a May Day event was organized in a Latino working-class neighborhood by a local immigrants rights organization to celebrate International Workers’ Day and demand immigration reform. The comrades set up a stall and were the only Marxist group present with a table and political literature. The mood was joyful and militant, with traditional immigrant rights chants such as “Sí se puede” or “The people united will never be defeated,” as well as labor slogans such as “Milwaukee is a union town!” The comrades later joined a march and concluded the event with a protest against the Republican Senator Ron Johnson.

A May Day rally and march was organized in Newark by DSA, with participation of about 200 people from immigrant rights and other local advocacy organizations. The SEIU 32BJ and Rutgers Newark AAUP/AFT unions expressed their support with the event, although they were not present on site. The comrades were the only group with substantial political materials, and gathered a lot of interest from the crowd. They distributed a large amount of booklets and fliers, also selling several books and many copies of Socialist Revolution magazine!

In San Francisco, a group of around 300 people met at Embarcadero to march to Civic Center for a rally. Among other figures, Angela Davis gave a speech at this event. Even though the event had a very mixed political composition, our comrades encountered a lot of people receptive to revolutionary ideas!

Several comrades participated at a DSA-organized rally in Holladay Park. They set up a literature table which gathered a lot of interest! The comrades distributed several May Day leaflets, as well as copies of Socialist Revolution magazine.

An immigrant rights’ rally was organized for May Day in Chicago, with about 300 people present. Alderman and self-described socialist Byron Sigcho-Lopez was among the sponsors. All in all, it was a great experience and the comrades sold out of their Socialist Revolution magazines at the event! 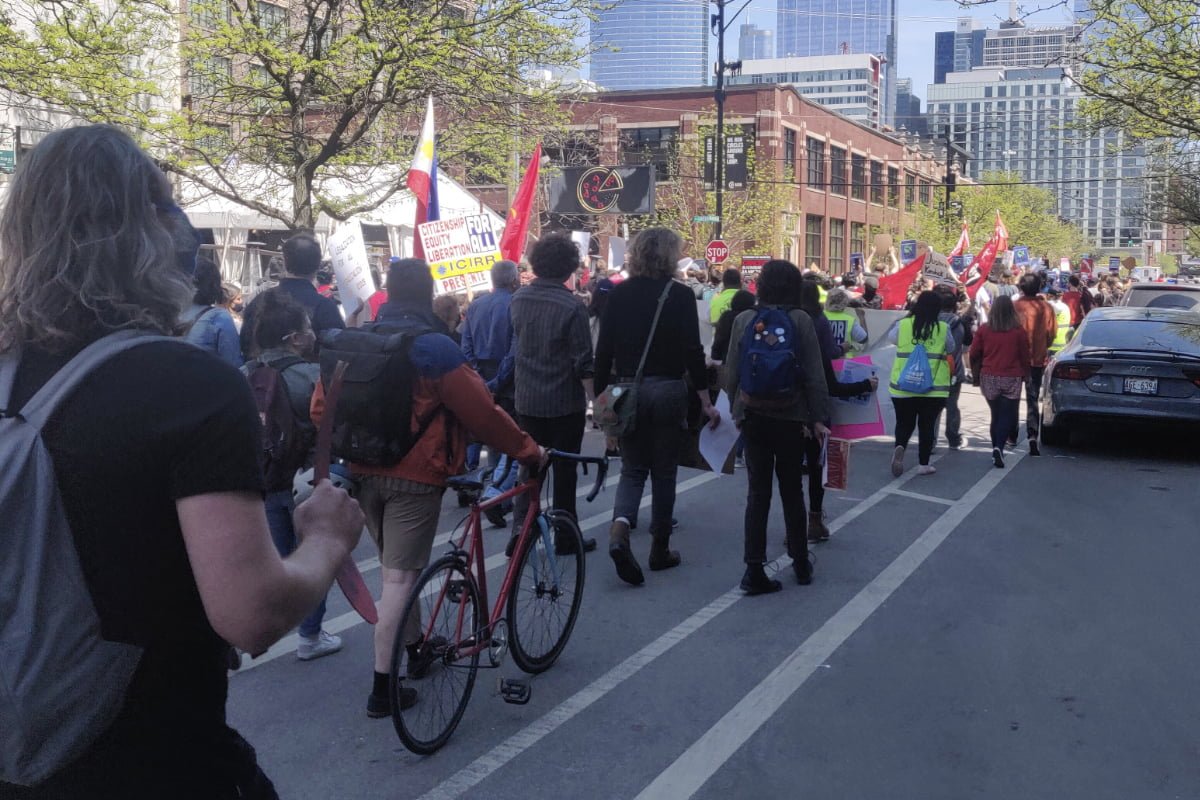 In Boulder, we held an outreach tabling event as an opportunity to raise an independent banner for May Day. Many people were receptive to the slogan “fight racism with revolution,” and for combating inequality and racism through a working-class struggle and, ultimately, a workers’ government. Afterward, we participated in a “Pass the PRO Act” rally hosted by Denver DSA and other left-wing and immigrant rights’ organizations—in addition to the University of Colorado Campus Workers’ Union, UNITE HERE Local 23, and BCTGM Local 26.

On May 1, the Los Angeles branch had its first large-scale event since demonstrations following the Presidential election late last year. They participated in a sizable May Day rally in the Chinatown area of downtown LA. Several hundred workers and youth were present at the event, which was organized jointly by various union locals and immigrant rights’ groups. The comrades had many productive conversations with those seeking Marxist ideas!

The comrades in Seattle organized an outreach tabling session before joining the May Day demonstration for essential and excluded workers organized by the immigrant rights organization El Comité. The May Day march numbered in the hundreds, far smaller than before COVID. In years past it would be normal to expect thousands to turn out for a May Day march. Still, this was a very energetic event and our comrades learned a lot and were able to reach out to many new folks with our ideas, distributing leaflets and selling several copies of Socialist Revolution magazine.

The St. Louis branch participated in a May Day picnic sponsored by the local DSA branch. It was an encouraging social event after a long year of isolation through the pandemic!

Due to the Kentucky Derby being on the same day as May Day, there were very few opportunities to rally for this date. Instead, the branch held a successful meeting and fundraiser to celebrate International Workers’ Day. The comrades were able to raise nearly $140!

The AFL-CIO and DSA organized a May Day rally in Dallas. About 70 people attended the event from various organizations. Several speakers gave political speeches, which were followed by live music!

On May 1, the Philadelphia branch organized a public outreach event, tabling with literature at a local farmers’ market in Clark Park. There, reception for revolutionary socialist ideas was generally very positive! The comrades talked to dozens of people and sold several copies of Socialist Revolution magazine. Overall, it was an encouraging and productive May Day!

May Day around the world

The only way to fight against the world crisis of capitalism is to build a genuinely international revolutionary organization. That is precisely what the International Marxist Tendency is doing in over 40 countries worldwide. There’s no time to waste—join us now in the fight for world socialism! 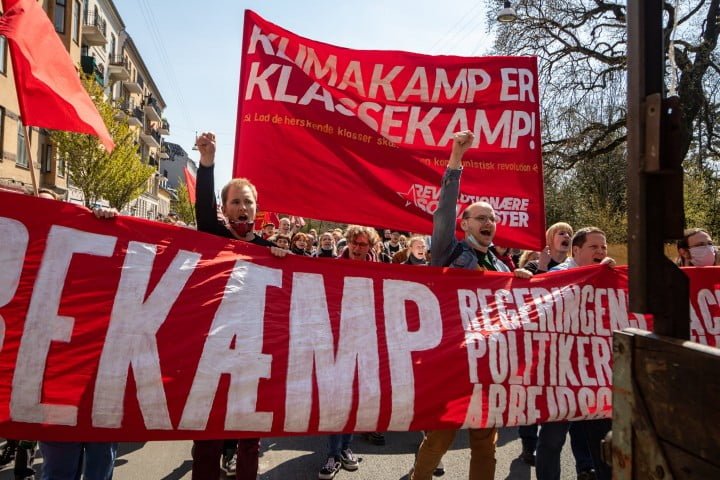