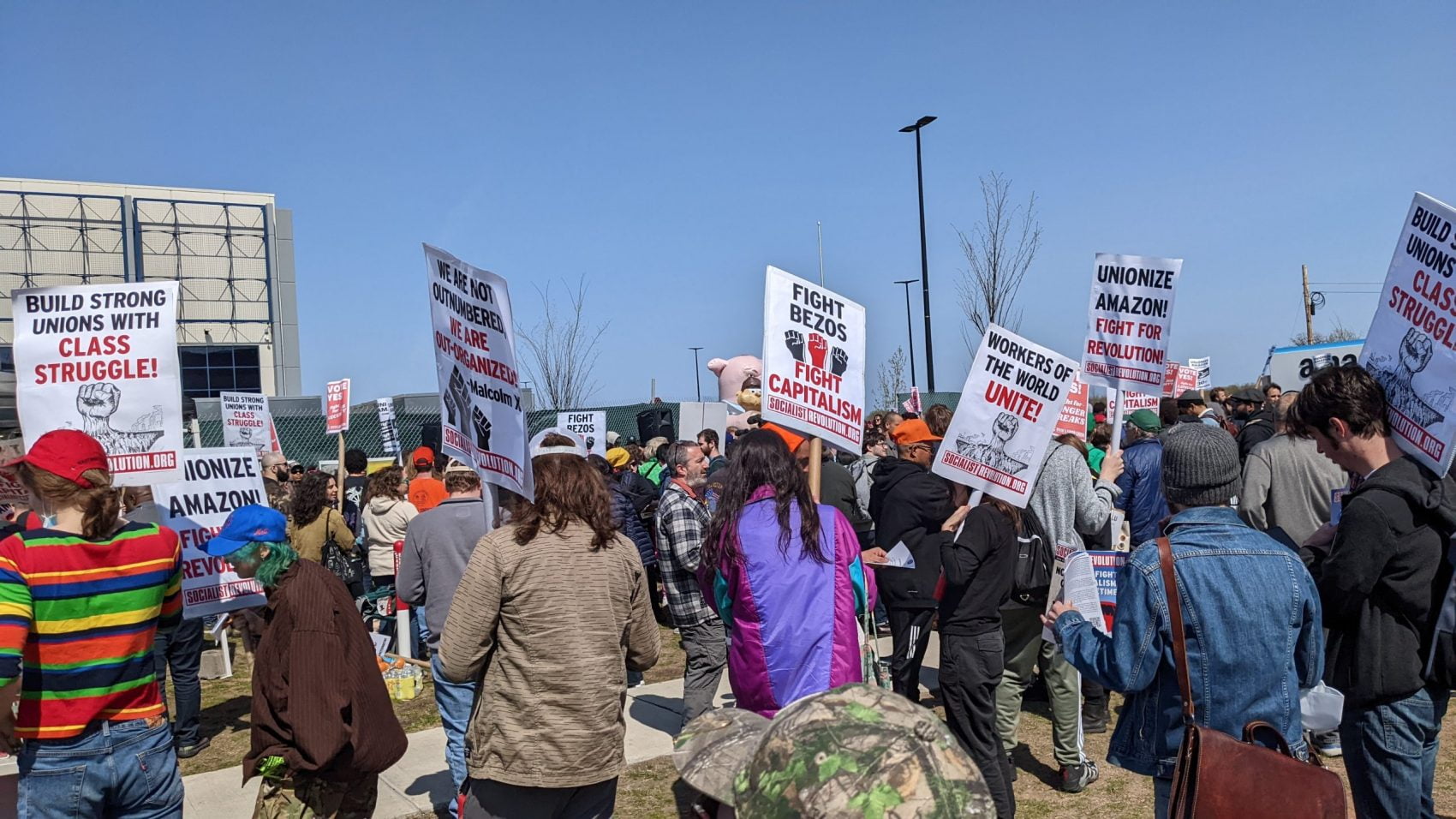 After the successful vote to unionize the first Amazon workplace at the JFK8 fulfillment center in Staten Island, the newly formed Amazon Labor Union (ALU) called for a rally on Sunday, April 24 to support the workers at the adjacent LDJ5 sorting facility, who are voting this week on whether to become the second unionized Amazon site. Together, the warehouses are a key logistical point for Amazon’s operations in NYC, employing nearly 10,000 workers.

Events at Amazon are galvanizing the ranks of the labor movement, and ALU’s call for broader labor solidarity was a perfect opportunity to show our support. It was an opportunity to raise the need for revolutionary ideas in this struggle, to call for class-struggle methods and for the entire labor movement to go on the offensive.

Accordingly, Socialist Revolution comrades in the NYC and NJ branches organized a contingent to make the trek to Staten Island—some in carpools, others by ferry or other public transport. Travel logistics were not helped by the Brooklyn Marathon closing off major sections of the city and bumping up driving time to over two hours. Comrades were not deterred, however, and in the end we had a contingent of 30 comrades.

We arrived an hour early and set up a table with a full display of booklets and our Join the Fight for Socialism in Our Lifetime banner, while people trickled into the rally. The Socialist Revolution contingent was visible and appeared in lots of footage of the event, with a number of media photos and videos. We also brought a couple hundred copies of the leaflet we prepared for the event, with the headline: “Class Struggle at Amazon: Labor Must Go on the Offensive!”

As outlined in the leaflet, our perspective on this struggle is that the initial union votes at Amazon and Starbucks, as exciting a victory as they are, really only represent a first step. Taking on the company in the fight over a contract, and winning real concessions at the expense of capitalist profits will require an all-out class war. That is why we are fighting to build a revolutionary organization capable of conducting systematic agitation throughout the country to bring socialist ideas into the labor movement. The class war cannot be improvised—it must be meticulously prepared!

Unfortunately, instead of pushing for class struggle methods, other left groups present mainly put forward run-of-the-mill trade union slogan slogans like “Vote Yes!” “Fight for Job Security!” “Unionize Amazon Everywhere!” But not a word about capitalism, socialism, revolution, or class struggle. In our view, the role of socialists is not merely to support what has been achieved so far, but to offer a way forward in the struggle for a better world for all.

This effectively places these groups to the right of Chris Smalls, the Amazon worker who founded the ALU, who spoke at the rally in favor of revolution and called for workers to “take over the country.” The same can be said for Sara Nelson, the leader of the flight attendants’ union who made headlines when she called for a general strike in 2019. She addressed the crowd, yelling, “Eat the rich, baby!” and attacking the idea of class collaboration: “There is no fucking labor peace!” The crowd cheered the loudest at these kinds of statements, which connected with the slogans on our signs: “Unionize Amazon—Fight for Revolution!” “Fight Bezos, Fight Capitalism” and “Build Strong Unions with Class Struggle!”

Militant speech from @FlyingWithSara at the @amazonlabor rally on Sunday!

"There is no fucking labor peace!"

Other labor leaders were present and gave more typical, moderate speeches, like Randi Weingarten of the American Federation of Teachers—a labor leader with a $500k salary. Mark Dimondstein, president of the American Postal Workers Union also spoke, pledging to support the Amazon workers. The newly elected leader of the Teamsters, Sean O’Brien, has made similar statements of support, but was unable to attend the rally in the end.

But as the saying goes, talk is cheap, and it remains to be seen how these labor leaders intend to support the efforts at Amazon and Starbucks. We believe they should be mobilizing the entire strength of their membership and resources to support the critical battle to organize the unorganized, with mass, class-independent action—rallies, marches, solidarity pickets, and bold demands on wages and benefits. The labor leaders have the power to mobilize millions of workers and yet, so far, all we’ve seen is “verbal” support in speeches and statements. Militant action is what is needed at this point!

Over the course of the afternoon, there were some 300–500 people in the crowd. The remote location and transportation obstacles probably filtered out a lot of the young working-class crowd that would have otherwise attended to support the unionization effort, which has the backing of 75% of the public nationally and 83% of young people.

On the other hand, although there was plenty of energy and a militant mood at the rally, the relatively small turnout speaks volumes about the gap between labor leaders’ words and actions. The New York City Labor Council has over a million workers in its ranks, and with the stakes this high, they could have easily mobilized a crowd at least ten times this size.

There was also confusion over the last-minute decision for Bernie Sanders and AOC to stage a smaller rally at the same location earlier that morning, rather than joining the planned ALU rally in the afternoon. They spoke to an audience made up mostly of the press, which, having collected their footage of the “heavy hitters,” largely skipped over the ALU rally. In the end, a large part of the afternoon crowd was made up of union staffers and socialist organizations, with a sprinkling of Amazon workers who filtered through during the short breaks in between shifts.

Nonetheless, sales of Socialist Revolution magazine, booklets, and books were brisk and many people signed up to learn more about the International Marxist Tendency. Sara Nelson took one of our leaflets, and comrades spoke with her about class-struggle unionism and the need to root out the conservative labor leadership.

All in all, comrades from the branches of the NYC-NJ metro area did a great job of energetically connecting with the growing resurgence of labor militancy. We will continue to keep our eye out for opportunities to support the movement to unionize Amazon. May Day is right around the corner and will surely be impacted this year by the energy around the ongoing unionization efforts. Socialist Revolution will be out across the country to celebrate this important working-class holiday—we hope to see you there!