Obama, Trumka, and the Jobs Act 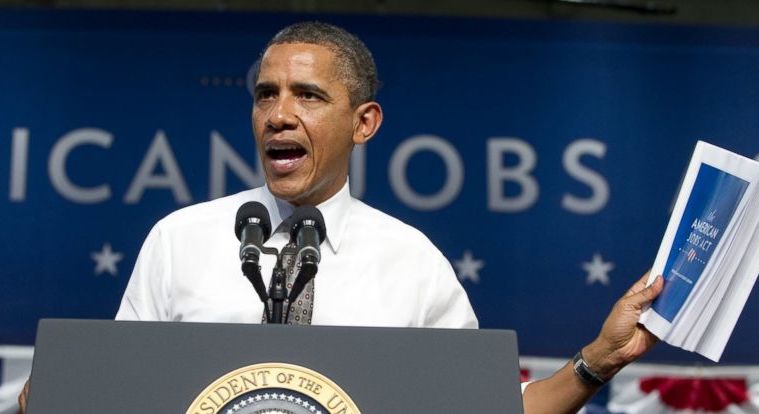 On September 12, President Obama unveiled the American Jobs Act to Congress. In it he proposes a $447 billion package to create jobs by building infrastructure and hiring teachers, firefighters and other public sector workers. After the speech, some in the Democratic-leaning sections of the media said that, in so many words, “this is the real Obama,” who supposedly fights for working people against the “special interests” and Wall Street etc. AFL-CIO President Richard Trumka was also quick to support the return of “the real Obama.”

But Obama’s “Jobs Act” has less to do with creating the millions of jobs we need than with preparing the ground for the 2012 elections. In reality, over the past weeks we’ve seen the return of “election year Obama,” who like the rest of the Democratic Party campaigns in the name of working people and “the little guy,” but governs solidly in the interests of big business.

The plan, if passed by Congress, would in effect amount to another modest “stimulus” package. Of the $447 billion, $250 billion would be set aside for tax incentives for businesses that hire workers or raise wages. Also, workers will get a “tax break” from having to pay $1,500 in Social Security deductions.

This may sound nice enough on paper, but we have to ask: how will the lost funding to workers’ Social Security pensions be made up?  Defunding Social Security will not “save” the program—it will only pave the way for even more cuts and privatization through the back door in the future.

Other provisions in the plan call for $50 billion in new infrastructure spending, $10 billion to create an infrastructure development bank, $30 billion for repairs and upgrades to public schools, and $35 billion to help the states hire teachers and EMTs.

Again, those figures might look impressive on paper, but in reality they fall far short of what is really needed, even by the White House’s own estimates! In the past, Obama’s economic advisors have said that the nation’s infrastructure needed more than $2 trillion—four times as much as what the “Jobs Act” calls for—to bring roads, bridges and other infrastructure up to date and in line with current needs. They also stated that public schools need between $270 billion to $500 billion in back-logged maintenance costs. As infrastructure crumbles and schools fall apart, more than 200,000 jobs have been eliminated in the public sector alone over the past year, which dwarfs the number of teachers and EMTs who might be hired if the act is approved by Congress.

The act also calls for $15 billion towards “Project Rebuild.” Under this plan, the federal government would give public money and leverage capital from one group of private companies, in order to finance other groups of private companies who will refurbish vacant and foreclosed homes. But why not create government agencies to hire workers and do the work? Why the profit-taking middle man? If there is public money involved, we demand public ownership and accountability!

In addition, the housing market remains in a slump, due to private companies building too many houses which workers could not afford in the period before 2008. There is still a glut and these same private real estate companies and big contractors are not investing. This all stems from one of the organic features of capitalism: overproduction. There is no way around this problem within the confines of capitalism, other than to “wait things out” until there are more workers able and willing to buy new houses again. Injecting public money to “lubricate” private investment will not work, because private ownership and private profits are the reason for the crisis in he first place.

Even before Obama delivered the speech, officials in the White House had stated they would try to tie the “Jobs Act” to the recommendations of the bipartisan Congressional “super committee,” instead of pushing for a stand-alone bill. This committee is planning $1.5 trillion in budget cuts. In other words, the already insufficient “Jobs Act” will be paid for by massive cuts to Social Security, Medicare, downsizing and furloughing of public sector workers and other cuts. These cuts will almost certainly cost more jobs than the act creates!

AFL-CIO President Richard Trumka issued a statement following Obama’s speech, supporting the act and said that with it, “President Obama is going to the mat for working people.” He added, “The economy can’t be rebuilt if social safety nets like Medicare, Social Security and Unemployment Insurance are slashed.”

Supporting a “Jobs Act” that will create few real jobs and will be paid for by slashing Medicare and Social Security is not an alternative! As the only organized section of the working class, it is the responsibility of the unions to show the way forward against cuts and austerity, and this starts with the leadership.

One way the unemployment problem could be solved is to immediately reduce the work week from 40 hours to 30 hours with no loss in pay. This would immediately create some 26 million new 30 hour/week jobs. If we did this, unemployment and underemployment could be entirely eliminated almost overnight!  But how could all this be paid for? The big corporations made more than $1.6 trillion in profits last year. This is wealth created by the labor of the working class. We think the creators of that wealth should determine how it is used. We need jobs, health care, and education: Make the rich pay!

If Trumka and the AFL-CIO leadership were to begin seriously mobilizing the unions in the streets around this program, it would be a powerful pole of attraction that would draw massive support from unorganized workers, youth and the unemployed. The #occupy movement which has spread across the country offers just a glimpse of the pent-up energies and willingness to fight that is building up. This could be harnessed in a mass movement led by the unions to stop the bosses’ attacks.

Both of big business’ major political parties are well underway campaigning for the 2012 elections. Obama’s “Jobs Act” shows once again that the Democrats will roll out the populist rhetoric in order to gain votes. But the promise of “jobs” is false if it is to be combined with deep cuts in social spending.

Now, more than ever, the unions must break with the Democrats, mobilize in the streets, and build a mass party of labor that can offer workers and youth a genuine alternative.