On the Call for an October 15 General Strike 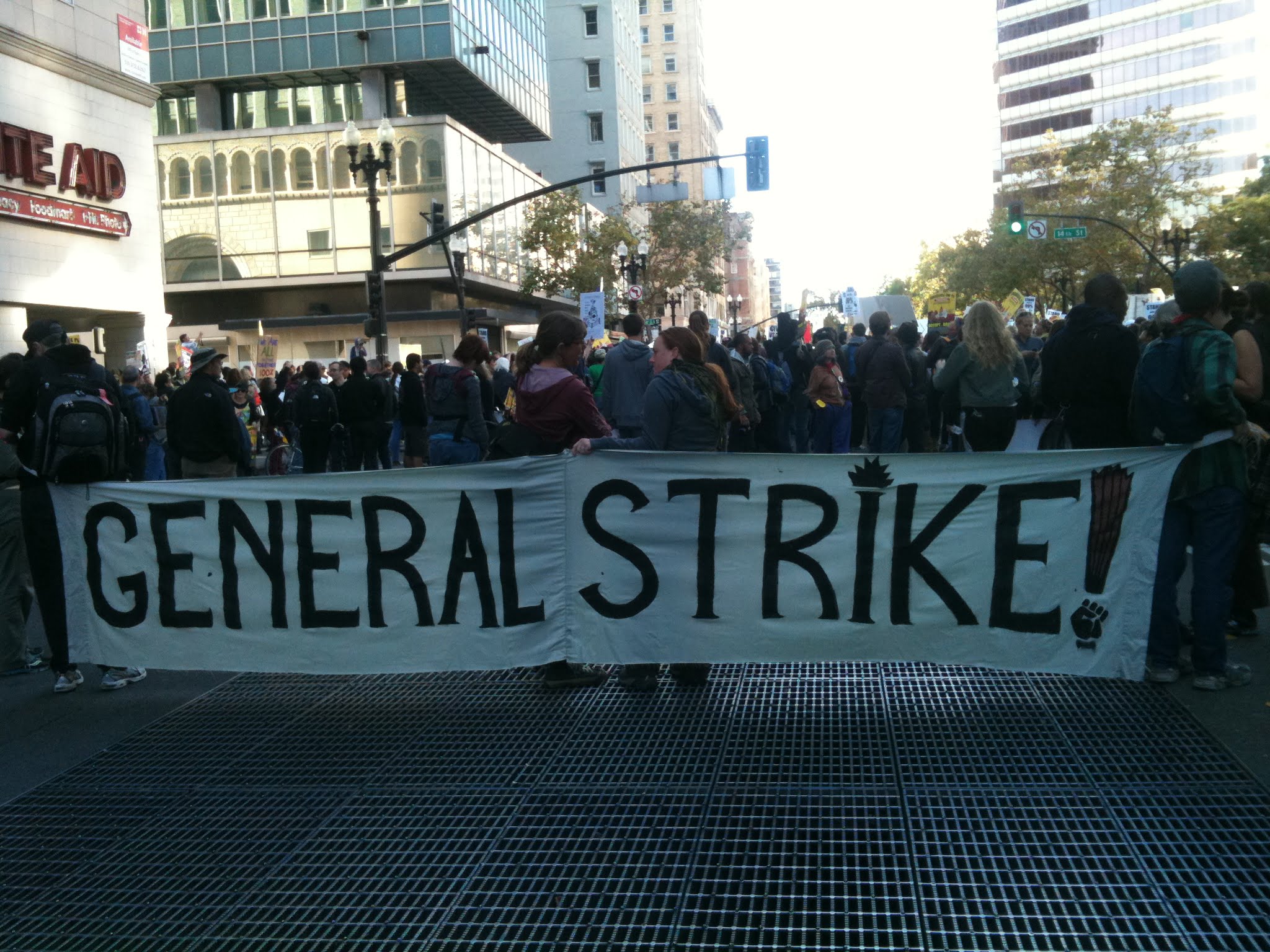 History proves that those in power never grant concessions out of the goodness of their hearts. Anything that fundamentally changes people’s lives must be fought for and won. As this lesson seeps into the minds of millions, a small group of online organizers have sent out a call for a general strike on October 15.

Despite not being backed by any recognized part of the labor movement, their appeal has received a healthy echo on social media, with several thousand participating in its organizing channels. This is symptomatic of the growing class consciousness, discontent with the status quo, and increasing willingness to fight back among American workers and youth.

The basic aims of the strike are certainly laudable. They include wage increases, improvements to working conditions, and political reform. Calling for a general strike is a qualitative advance over many past campaigns, which merely demanded this or that legislative solution. The active agent of a “call for legislation” is the bourgeois politician who makes backroom deals and whips votes to cobble together a majority. A general strike, on the other hand, is a manifestation of the organized, concerted action of the working class. However, there is much more to organizing a general strike than just calling for one.

Who should we place demands on?

Revolutionaries believe that once the working class is conscious of itself as a class and the essential role it plays in the functioning of society, it can change the entire system. Every strike, struggle, or mass movement is part of a learning process as the working class moves through leaps and setbacks towards this kind of consciousness. As part of this process, Marxists place demands on the leaders of the labor movement and the left.

These individuals owe their positions to the structures of the organized working class. In the US, the unions are the only mass workers’ organizations, as we do not yet have a political party of our own. And even though they are currently controlled by an entrenched bureaucracy, the working class must fight to regain the unions if the movement is to progress. If the individual leaders will not listen to our demands, many workers within these organizations certainly will, and they will either transform the unions into genuine tools of struggle, or, failing that, understand the need to create new, more militant and fully class-independent organizations.

This is very different from placing demands on the politicians of bourgeois parties, who are accountable only to rich donors and the capitalist media. Asking them to make changes in favor of the working class is naive at best, and foments illusions in the idea that labor and capital have common interests. It implies that capitalist society offers genuine democracy for everyone. The bitter truth is that workers should expect nothing from any capitalist government—and the Biden government is such a government. The capitalist rulers do give reforms at certain times, but this is only ever a byproduct of class struggle, when the bosses feel that their system as a whole is threatened. When the movement dies down, they claw the reforms back, one way or the other.

With this in mind, any appeal for a general strike should be directed at the labor leaders, as it is ultimately their responsibility to call and organize for it. Furthermore, a general strike should not be conceived as something merely to “pressure” the bosses but rather, to demonstrate to the workers their vast potential power and how class unity could transform the situation. A 24-hour general strike in 2021 would rock American society and set the stage for a further escalation of the class struggle.

Who can call a general strike and how would it be organized?

Strikes are effective when they shut down production, construction, transit, communications, distribution, services, etc. Along with its massive societal majority, the power of the working class derives from the fact that it alone does all the work that makes the world run. Withholding that labor causes the whole machinery of society to halt.

Insofar as every workplace requires a collective effort to operate, that power is not the power of an individual, but of the workers as a group. To entirely shut down an operation, all workers must participate as one. A strike is not an individual’s choice to call out of work—listed as an option for how to participate on October 15— which already happens every day for various reasons. Rather, it is a conscious, collective action to be planned, organized, discussed, and implemented by a significant majority in a workplace, industry, or society as a whole.

A serious call for a general strike, therefore, cannot be declared from outside the mass organizations of the working class, namely the trade unions. If the leaders of the AFL-CIO, or at least the leaders of some of the bigger unions set a date, organize, and mobilize for a general strike, it would have a greater chance at being successful and of winning the active support of many as-yet unorganized workers.

Those calling for a general strike this October 15 clearly have good intentions—but they do not have the authority among the workers to get a serious echo among the class as a whole. Nonetheless, in the absence of influence in the mass organizations, the call and its accompanying demands can still serve an educational purpose.

The key is to understand that if the present union leaders will not provide what the working class needs, then another leadership must be constructed. Building an alternative will take time, but a first step would be to call on the trade union leaders to actually organize a general strike around a series of class demands. Those calling for the October 15 action could use the opportunity to start developing a network of workers who agree with the call and demands. This could be the beginning of a class-struggle network in the labor movement, which can build a class-struggle leadership over time.

Approaching it this way would unite the more serious and committed activists around a real program for change. The basic message should be that the task of changing society must be carried out by the working class itself. Especially coming out of a period of numerical decline of the labor movement, this educational aspect, far from an afterthought, is a key field of struggle. Doing this correctly, however, will require painstaking work and careful consideration.

What kinds of demands should be raised?

We applaud the fact that the October 15 call puts forward a series of demands. However, Marxists believe that demands should not only serve to expose the exploitation and injustice of life under capitalism, they should collectively point toward a clear solution: the need for a workers’ government, and in the case of the US, the urgent need for a workers’ party as a step in this direction.

Demands such as “Free healthcare for all,” “12 weeks paid maternity leave,” “four-day workweek,” and “$20 minimum wage” are a good start, but are quite modest in the grand scheme of things. For example, a minimum wage of $24 an hour would just barely keep pace with productivity gains since the minimum wage’s peak purchasing power in the 1960s. And as far back as 1935, the bourgeois economist John Maynard Keynes argued that a three-day workweek was possible at that time, with no drop to existing labor productivity or profitability for the capitalists. Just think of what would be possible on the basis of the technical advances made since then!

Another demand is for a “25% corporate tax rate (No loopholes).” This was effectively achieved in the US in the past without adversely affecting the fundamentals of capitalism. The corporate tax rate was nearly 53% during the 1960s, and until fairly recently stood at 35%. Through creative accounting, there will always be loopholes or other ways of avoiding the taxman. The real question is this: why allow them to keep any of it?
The “earnings” being taxed are the surplus value created by the working class, which is appropriated by the capitalist class. In our view, the collective wealth generated by society as a whole should be owned, controlled, and administered by society as a whole. Instead of higher taxes, the workers should demand nationalization of the top 500 companies, to be run under democratic workers’ control.

Socialist Revolution also demands full employment, a 20-hour week, and a minimum wage of $1,000 per week. Demands like this would expose capitalism’s inability to provide a dignified life to the majority in the midst of material plenty. It would also show the kind of world that’s possible when the working class takes charge.

In addition to these demands, there should be explicitly political demands. Politics is concentrated economics, and for the working class to really change society, it needs political representation of its own. We should call on the labor leaders to stop supporting the political parties of the enemy class and initiate a party of the workers. A mass working-class socialist party could eventually win broad support and establish a workers’ government. The only way to stop the capitalists from doing what is in their interests is to break their power and throw out the entire system.

Who should run society?

General strikes occur more often than a US-centric perspective might lead one to believe. In Greece, France, and many other countries where the labor movement is stronger and the working class has historically been organized into mass parties, general strikes are fairly frequent occurrences. Unfortunately in practice, they rarely achieve their stated demands.

This is especially true if their aims or duration are limited in advance, as the capitalists can sit on their reserves and ride out the storm, while workers can’t stay on strike forever. Furthermore, given the current state of the labor and left leadership, they often include only limited sectors of the economy, limit themselves to narrow demands, and are only half-heartedly mobilized. Far from posing the question of power, such strikes serve merely to “let off steam” without threatening the status quo.

A genuine general strike, however, in which a majority of the workers participate, poses a key question: who really runs society? An all-out general strike is part of the workers’ struggle to take decisive control of politics and the economy. It does not merely ask for reforms, but serves to unleash a new balance of social forces in the context of a pre- or fully revolutionary situation.

With the US labor movement on the back foot due to decades of class collaboration, and without a mass party of our own, a lot of groundwork must be laid and a lot of experiences had before a successful all-out general strike can take place. For example, a one-day general strike would serve as a dress rehearsal for the workers, a stepping stone toward more decisive action in the future. But even a one-day general strike is not something that can be improvised. But abstract calls for mass action will necessarily bring limited results—which can be demoralizing and push those who participate to draw incorrect, pessimistic conclusions.

It is with all of this in mind that we believe the call for a general strike on October 15 should be seen more as an educational opportunity than an all-out call to pose the question of power. We welcome the initiative of the comrades working on organizing towards October 15 and hope to work together to bring much-needed political and theoretical clarity to the working class.