Out of the Subways and into the Streets! Resisting NYC’s Underground Police Brutality 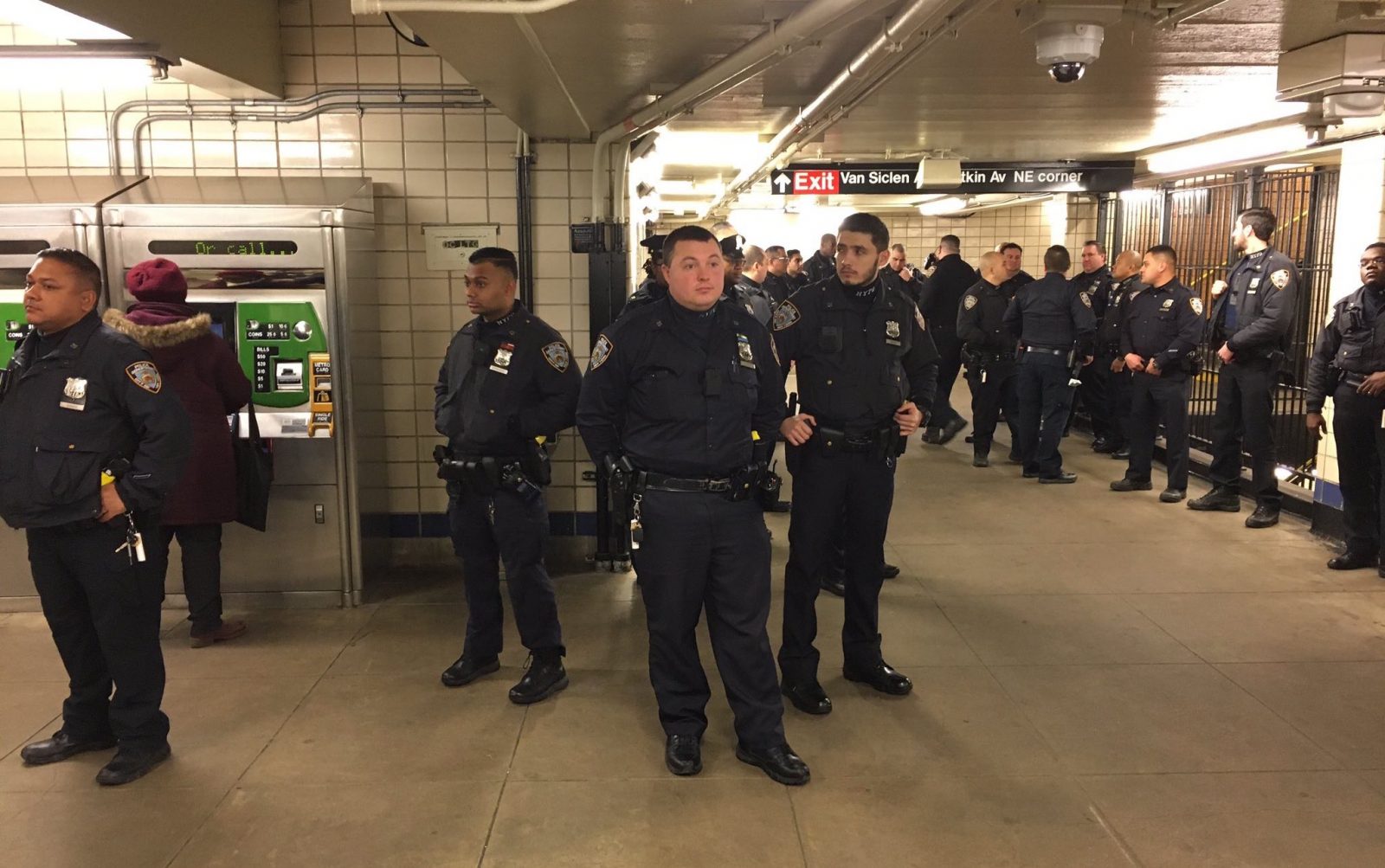 New York City is one of the most segregated cities in the country and the most unequal in terms of wealth. It is home to one million millionaires, more than any other city on earth, and has around 70,000 homeless people living on its streets and in its tunnels. A social explosion is inevitable, be it sooner or later. In anticipation of this, the police have launched an offensive aimed at working-class black and brown youth, resulting in 22 shootings and at least seven deaths since last summer.

The decrepit subterranean platforms of New York City’s subway system have long been a focus of discontent for the working-class commuters who keep the metropolis running. On any given day, 5.5 million people descend into the underground tunnels that make up one of the world’s oldest mass transit systems. Steadily rising fares and constant delays—ten subway lines are delayed more than 50% of the time—add both insult and injury to the miserable daily grind of ordinary New Yorkers. In recent months, a wave of police brutality and the militarization of the subways have brought the simmer of popular anger to a rolling boil.

Last summer, the city’s Metropolitan Transit Authority (MTA) announced a campaign to combat “fare evasion” which, they allege, results in losses of $200 million a year. This may sound like a large sum, but it is chump change in the citadel of global capitalism. The MTA brought in over $16 billion in 2019 alone—more than the GDP of many countries.

Some quick pics of just some of the army of cops that came to the #SwipeItForward action in East New York, Brooklyn this morning just because protesters were giving out free swipes to people to protest racist policing & the criminalization of poverty. pic.twitter.com/XxkbDaHDEp

The MTA plastered its stations, buses, and trains with campaign ads reminding riders that the crackdown was being intensified—as if the increased police presence wasn’t evident to all. With 2,500 police officers already patrolling New York’s subway systems, Governor Cuomo announced in November that 500 new police would be hired, devoted entirely to the subways. To top it off, the MTA installed cameras facing the turnstiles at 50 stations, bringing the total number of subway surveillance cameras to over 5,000. Of these, 2,800 are monitored by police and MTA security officials in real-time—a high-cost measure that in no way prevents fare evasion, but which contributes to an atmosphere of fear.

This campaign of intimidation is projected to cost the MTA $249 million over the next four years—tens of millions more than they expect to recover in revenue over the same period. Whether or not these measures will curb fare evasion is uncertain, especially as fare prices and cost of living rise, while relative wages do not.

The ramped-up enforcement has led to a series of incidents that have sparked widespread indignation. On October 24, a black teenager was swarmed by a dozen cops, with guns drawn, for hopping the turnstile. A video of the unarmed youth with hands raised being brutally tackled went viral. On the same day, another video showed a police officer punching two teens in the face, including 15-year-old Benjamin Marshall, who suffered a concussion. The cop, who was not suspended from duty after the incident, was a repeat aggressor and the subject of multiple complaints filed with the Civilian Complaint Review Board over the use of excessive force.

In response, New Yorkers took to the streets on November 1 and 22. Protests are not a rare sight in the city—some demonstration or another takes place every day—yet these were something very different. There were no metal fences corralling demonstrators like livestock headed to the market. And this was not Midtown Manhattan, where activists are a mere drop in a hostile bourgeois sea. The first demonstration took place in the heart of Brooklyn, the second in Harlem—on the home turf of the working class.

The protests were called by a small activist group called Decolonize This Place, and nearly 1,000 were attracted to this militant and unpermitted march. Those on the streets were defiant and angry, with chants ranging from attacking the NYPD to “This is class war! Eat the rich, feed the poor!” and “Fire to the gentrifier!” among many others. On both occasions, in scenes reminiscent of the recent movement in Chile, people hopped the turnstiles en masse and even tore apart the turnstile bars in one station.

By the second rally on November 22, the police had had enough of being openly ignored and exacted their revenge, arresting around 60 demonstrators, and leaving many bruised and bloody. More than ten demonstrators received misdemeanor charges, which is not typical for routine arrests during protests. These charges must be dropped!

Most significantly, one gets the sense from participating that the NYPD is frightened of the anger of the working class, which has been building up beneath the surface of apparent calm. They live in the city too, and they can feel it. It is evident from their actions at the second protest that they are terrified of being swept away by the rising tide of the class struggle.

As exhilarating as it was to participate in protests such as these, it must be noted that the organizers revealed a lack of political clarity in some of the tactics they employed. As an example, they requested that white participants stay on the margins and rear of the march. Their rationale was that this would form a “barrier of privilege” that would prevent the cops from violently repressing the non-white protesters inside. Not only did this cause chaos in contingents that were already in formation, as they tried to figure out how to divide along such lines, but it also separated attendees from the safety of their friends. It was also an empirical failure and did not prevent police beatings and arrests. The context of a militant anti-police demonstration trumped any moderation that the cops might usually show most white people on the street.

Moreover, the organizers’ strategy misunderstands what is necessary for a movement that can challenge the power of the capitalists and those who run the city in their interests. The struggle against racism is an integral part of the fight against the capitalist system. The divisions fostered by the racist structure of society are an objective barrier to the united movement of the masses against the ruling class. But the only chance we have at overthrowing the system is by uniting the exploited and oppressed—the overwhelming majority. Revolutionaries must explain to all workers—and especially those who do not bear the brunt of racial and gender oppression—why their interests are fundamentally aligned with other workers, and forge unity in struggle on that basis. In practice, segregating protests—while superficially appearing to be more “radical”—brings us further from the ultimate goal.

Revolutionary Marxists have always opposed the colonial enslavement of the planet by imperialism. The Communist International, in its days of ascendance, barred any organization admittance unless it supported the unconditional liberation of colonies around the world. However, there is a lack of clarity over the meaning of the terms “colonization” and “decolonization,” which can take it out of the material world and into the realm of mysticism.

The motor force of colonialism, and the root of its many manifestations in society, is the pursuit of profits on a global scale. The only source of value is human labor acting upon nature, and the ruthless exploitation of both is the fuel of capitalist society. Apparatuses of oppression and superexploitation facilitate the transfer of wealth from the laboring masses to the billionaire parasites who command the wealth of the world. By tearing out the roots of exploitation and oppression through the socialist revolution, the rest of the system will shrivel up and die, leaving future generations to complete the work of cutting cut away its withered remains. By contrast, activist campaigns seeking to “decolonize” institutions, language, etc., amounts to chopping a few leaves and branches—leaving the roots in place to regrow with redoubled force.

With the roots of imperialism and capitalism left intact, colonial independence regrows into debt bondage enforced through military and economic “interventions,” and legal equality regrows into mass incarceration and other, more subtle strategies of exploitation and oppression. This is why the goal of “decolonization” is inextricably linked to the socialist revolution—uprooting capitalism entirely. This does not mean abandoning specific struggles—on the contrary. But it means bringing this revolutionary perspective into every concrete struggle, combining all the disparate efforts into one stream aimed at the root.

How to fight and win

To succeed, struggles such as the fight against high fares, poor service, and repression on New York’s subways must harness the power of the broader working class. The transit workers organized in the TWU have the power and the will to fight with us. Their demands for better wages and conditions already reference quality of service, fare hikes, and other issues of concern to riders.

The protest movement should work to establish links with them so we can fight together for a free and fully funded MTA, living wages and better conditions for MTA workers, and an end to police aggression on the system. A militant and unified transport strike, with the support of New York’s millions of commuters on the streets, would paralyze the city and give workers a taste of their collective power.

The recent example of the Chilean “October Revolution” shows how, when there is an abundance of combustible material in society, an issue like rising fares can unleash a mass movement against the entire system. But if we are really going to change the world, we need to take a serious approach to our ideas. Revolutionaries have a responsibility to deliver clarity, a strategy, and a program that can lead the aspirations of the struggling masses to victory. This requires having a scientific analysis of society and how we can change it. It means putting an end to reactive and symbolic measures, in favor of a calculated and disciplined strategy that can successfully overthrow capitalism in our lifetime—this is the program and method of Socialist Revolution.