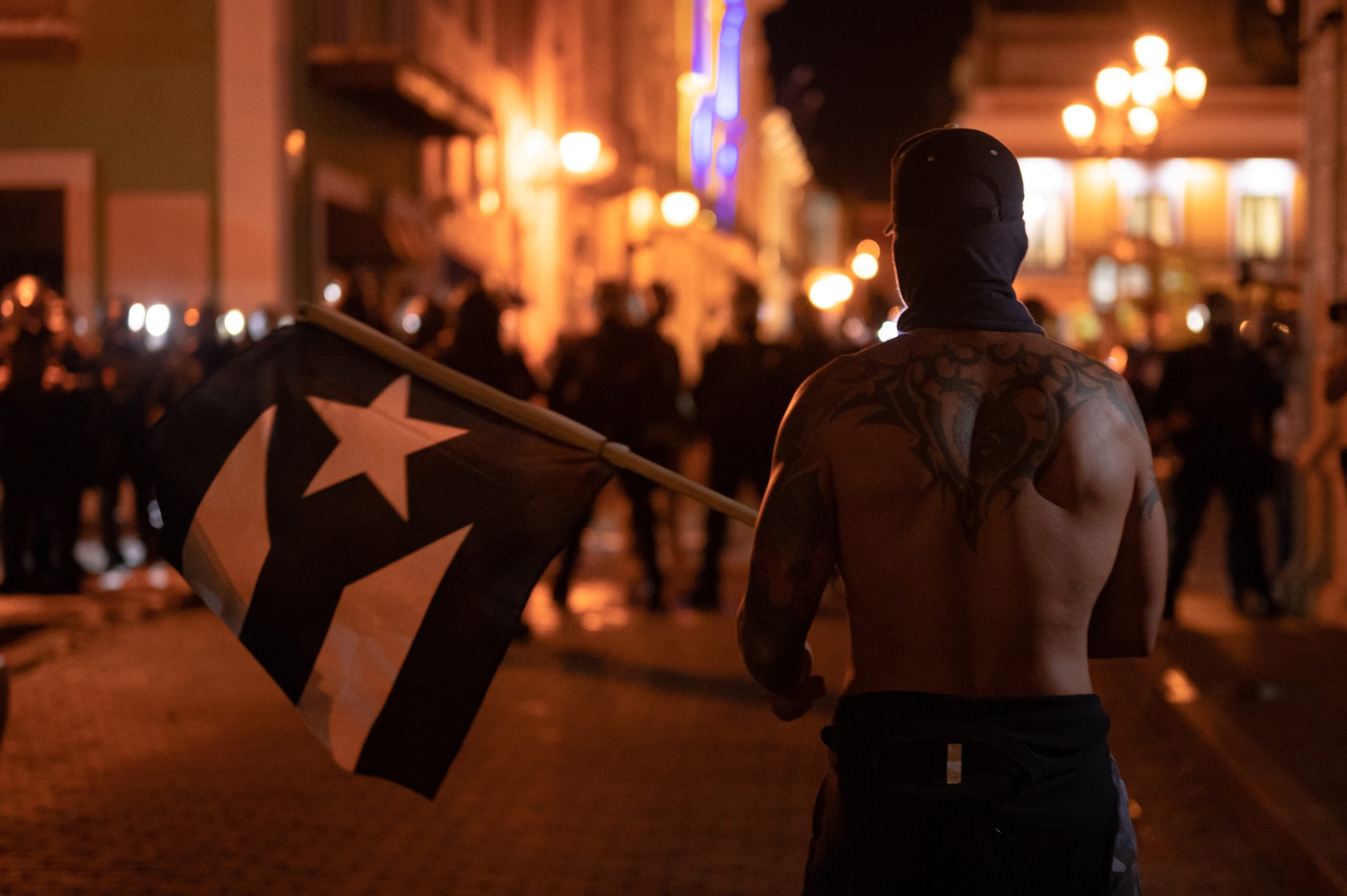 On Thursday, August 25, Old San Juan was engulfed in tear gas as units of Puerto Rican riot police once again brutally suppressed a protest opposite the Governor’s Palace. The protest’s main demand was the cancellation of the contract privatizing the transmission and distribution of power. This week, the population’s anger against the privatized company, LUMA, came to a head following a series of events which have demonstrated the incompetence of the subsidiary of the multinational Quanta Services and ATCO in effectively managing the electrical infrastructure.

Read the original in Spanish here

The moment it hits 8, the crowd explodes in the staccato barrage of metal on metal of the cacerolazo

In just the past month, simple breakdowns have forced many hospitals to use emergency generators for hours, leading to the cancellation of clinics. The frequency of the power cuts is such that several generators in a San Juan hospital crashed due to overuse and left pediatric and neonatal intensive care units without power. This very week, it was revealed that LUMA does not record disputes received by its customer service department and that it manipulates statistics on power outages. This is according to employees and former employees who also claimed to have faced harassment for trying to provide adequate customer support.

Since the sale of the electricity grid to a private corporation in June of 2021, clear evidence of its disastrous mismanagement has come in the form of explosions and fires on electrical substations across the archipelago, hazardous voltage fluctuations within the home, and ever-more-frequent and long-lasting breakdowns. The issues are attributed to the lack of experience of the employees contracted by LUMA, many of them foreigners with high salaries, and to the fact that the workforce is much smaller than the one employed by the state-owned corporation. Moreover, the Electrical Power Authority (Autoridad de Energía Eléctrica—AEE) has warned LUMA that it is not carrying out its duty to maintain the electrical lines.

In response, on Wednesday August 24, the Texas-based CEO of Quanta Services, Duke Austin, stood in for the despised Canadian president of LUMA, Wayne Stensby, and gave penance before the country. This failed public relations strategy was intended to stem the wave of outrage demanding that the contract be cancelled. This has already been widely covered by influential commentators and is now putting at risk the reelection of government officials of the New Progressive Party (Partido Nuevo Progresista—PNP). However, Austin’s vague and empty promises were far from convincing. Worse still, his ploy to surround himself with happy workers backfired, as it soon became known that many of them were PNP activists who used to work in the AEE, but were paid better wages at LUMA in positions for which they were not qualified.

In this context, early on Thursday afternoon, people from all over the country began arriving in Old San Juan raising the slogan “LUMA out,” demanding governor Pedro Pierlusi to cancel the contract. The call for a mass meeting at 5pm opposite La Fortaleza was adopted by opposition parties, leftist organizations, trade unions, civilian groups and even professional associations such as the College of Physicians. Despite the ideological breadth of the gathering, the crowd rejected the presence of politicians from the Popular Democratic Party (Partido Popular Democrático—PPD), the majority party in the legislature and ally of PNP in its austerity policies and compliance with the Financial Oversight Board. Spokespersons representing the organizations and citizens transmitted their messages through a sound system atop a van. At nightfall, the environmentalist Alberto De Jesús, known as Tito Kayak, crossed the barricade guarded by the police a couple of blocks from the palace and was immediately arrested. Even when the planned action ended, hundreds of people continued chanting slogans and clanging their pots and pans.

The peaceful nature of the protest took a turn at around 9pm, when ordinary policemen located at the barricade were replaced with specialized units armed head-to-toe with protective gear and “less lethal” weapons. Their threatening presence was sporadically met with flying rotten eggs or the unpleasant smell of a stink bomb. At 9:30pm, with the sensibilities of the militarized forces already very much wounded, the whistle signaling the forthcoming repression began to sound. First, there was the sting of pepper spray in the eyes of those gathered in front of the barricade, including members of the press and legal observers. When this only caused the crowd to fall back a few meters, canisters of tear gas were launched.

Amid the confusion, several squadrons of black boots emerged from behind the barricade and entered into formation to carry out the eviction. Almost all the cobbled streets of Old San Juan once again witnessed scenes of street fights between protesters resisting the order to disperse, and riot police shooting rubber bullets and pellets at close range, trampling and kicking those who fell to the ground, and smothering those who had yet to recover from the previous onslaught of tear gas. Three other people were violently arrested and must appear before a judge in September to settle their criminal charges. Dozens more were injured, including a 70-year-old trumpet player and a young trans woman who had to go to the hospital to remove pellets embedded in her skin.

The next day, the police commissioner, who remains under US court supervision due to a pattern of civil rights violations, justified the violent raid, arguing that the officers had been assaulted with eggs, stones and even a shovel, which turned out to be a prop of an actor who had turned up at the protest as Pateco the gravedigger. A new, anonymous call for a rally on Saturday night is now circulating social media.