Quebec: Thousands in the Streets as Student Strike Kicks Off 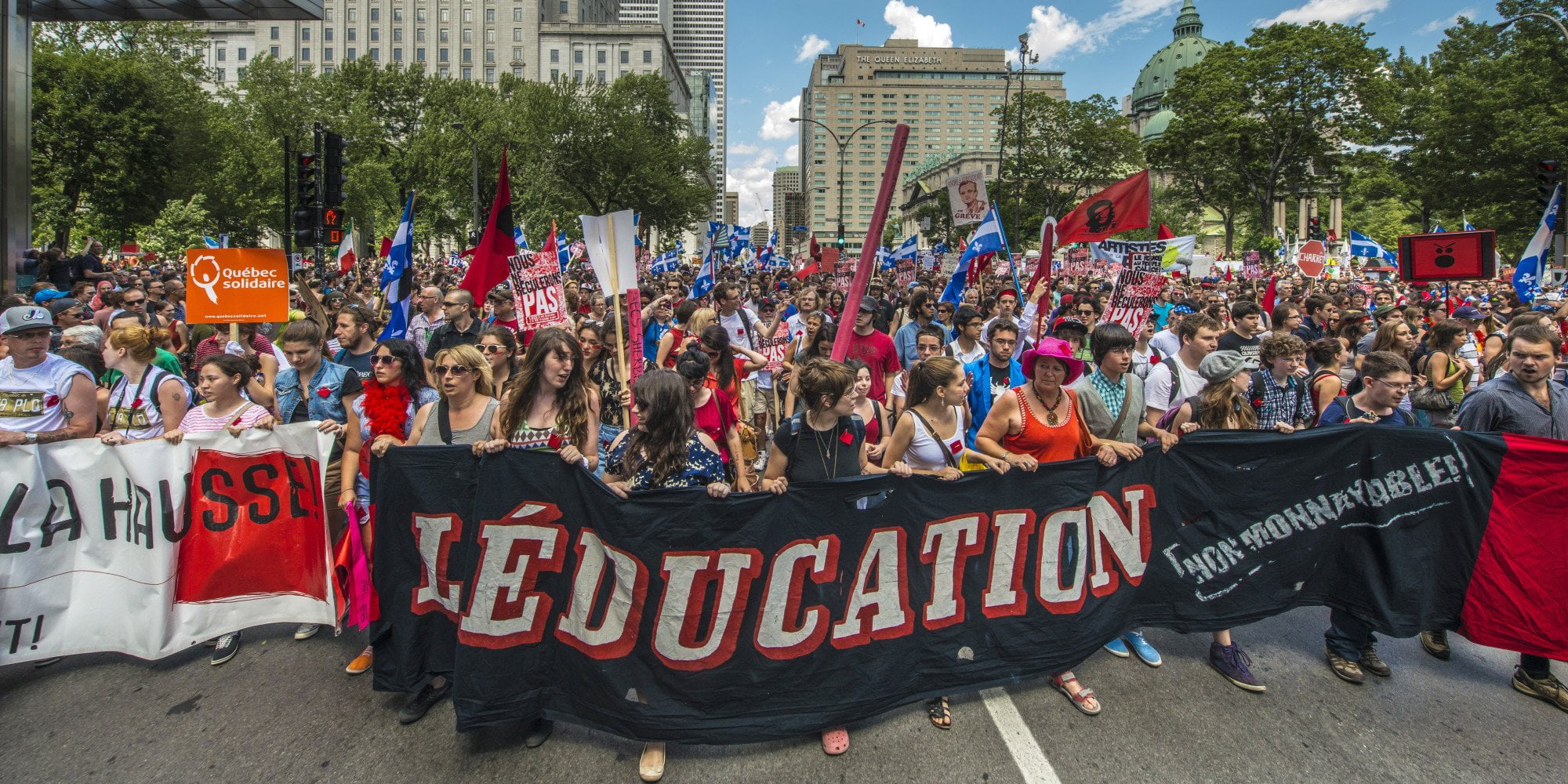 On March 21, thousands of students took to the streets of Montreal to protest austerity. The demonstration was part of the “Spring 2015” anti-austerity movement, organized by various student associations. On Monday, March 23, the student strike was officially kicked off with over 50,000 students commencing strike action which will continue for the next two weeks, leading up to a big demonstration on April 2. Another 150,000 students will vote for strike actions in the coming days. Many people believe this is the beginning of another “Maple Spring” as was seen during 2012 with hundreds of thousands in the streets for several months.

This strike, however,  is on a qualitatively different level than the massive student strike of 2012. This strike has been launched not just against tuition increases and cuts to education, but against the general austerity program of the government, which is mostly targeting public sector workers at the moment. On top of this, this student strike has the specific aim of leading into a workers’ strike.

The strike was launched on Saturday, March 21 by a big demonstration organized by ASSE (Association of Student Union Solidarity). Over ten thousand people took to the streets in spite of the cold and slushy conditions. The IMT had several comrades present at the demonstration with our new “Fight the cuts, Fight capitalism, Support the workers” banner and our new manifesto for the movement.

This week the strike is in full force as students have been picketing classes and demonstrating against austerity. This has led to clashes with anti-strike students. In the following video from the University of Laval we can witness one such moment where a student is trying to enter a blocked classroom and he calls the security. Here is the following dialogue:

Security guard: “Did your association vote for a strike?”

An important development has been the reemergence of the tradition of “night demonstrations,” which was started in 2012 after the government expelled the ASSE student representatives from negotiations. On Tuesday, over 5,000 students and youth descended onto the streets of Montreal and marched for hours chanting anti-austerity, antigovernment, and anticapitalist slogans. The police were there in heavy riot gear, and there were many provocations with the protesters. They clearly were trying to instigate some violence from the demonstration to justify a crackdown, which they did later in the night using tear gas and rubber bullets. In Montreal, this has resulted in dozens of arrests and fines handed out in the last few days by the police. In Quebec City the repression has been particularly brutal, with over 270 people being kettled and arrested in a demonstration on Tuesday night.

Quebec, like much of the capitalist world, is experiencing a deep economic crisis. The ongoing public debt crisis in Quebec sees no end in sight as the economic prospects for the province are dismal at best. Moody’s, the credit rating agency, has repeatedly threatened to downgrade Quebec’s rating if the deficit is not eliminated. Under this pressure, the Liberal government has embarked on an onslaught against the rights and living conditions of Quebecois workers and youth through austerity. The Liberals have been cutting municipal workers’ pensions, education funding, health care, child care, and wages. It is expected that $2.3 billion will be cut from the budget by 2016, and the worst cuts are yet to come. But, as this new movement is proving, these attacks will not be passively tolerated.

The Saturday protest against austerity drew several thousand people. Charlotte Gilbert, a spokesperson for Printemps 2015, explained the actions as “. . . a social movement that brings together militants from local unions, students, and collectives and community groups from across Quebec.” The general strategy of Printemps 2015 is to push for a “social strike” rather than isolating the students as was the case in 2012. While this is an important step in the right direction, it is important that students succeed in concretely linking up with the workers. Only the working class can bring the ruling class to their knees because without their labor society grounds to a halt.

The potential for this is there. The fundamental difference between this movement and the movement in 2012 is, in fact, that it is not primarily a student movement but a movement of the organized working class. Workers are angry in Quebec as they face cuts to their wages, pensions, and benefits. Major labor disruptions are expected in the coming months as a result of this austerity.

Just this past fall we saw a few mass demonstrations of workers. The largest of these demonstrations pulled 100,000 workers into the streets in response to the hated municipal pension reform. The mood has only grown more militant since last fall. Recently, many union locals have voted in favor of a 24-hour general strike to fight against the austerity. Rank-and-file trade unionists, from the Sept-Îles health care workers to the professors of the CEGEP of Joliette workers, are demanding concrete action from their unions. Despite the obvious mood of militancy in Quebec, the trade union leadership has unfortunately been vacillating over this question and has stated that there are no plans for any strike action.

Because of the gravity of the economic crisis in Quebec, the government has little room to grant concessions to the anti-austerity movement. This is precisely why friendly negotiations as we have seen in the past are not to be expected. Isolated student strikes, or even isolated workers’ strikes, cannot defeat the cuts in this period. Therefore, a 24-hour general strike would be a huge step in showing the ruling class who is really boss and would show the working class their real power in society. The trade union leadership should bring this to a vote in all union locals, begin preparations, and be willing to take further strike action if needed.

The role of the students in this struggle against austerity is limited, as it is the workers who hold the economic power to shut down the economy and hit the bosses and their friends in government where it hurts. Therefore, it is imperative that the actions of the students be directed towards solidarity with workers who are entering struggle. For example, the leadership of the student associations should form solidarity committees that can mobilize students to go out to trade union picket lines during a strike. The student associations should put forward demands that unite the student and labor movements, and help the rank-and-file trade unionists push their leadership to take up more militant methods and demands.

In this period of deep capitalist crisis, we will not be able to simply convince the bourgeois that austerity should end. This system is not able to provide workers and youth with a decent future and is actually making things continually worse for us. If this is all that capitalism can offer us, then we must do away with capitalism entirely! A truly democratic society must be built that is run by the working class for social need rather than private profit. These socialist ideas are the only ideas that are able to get us out of this mess created by capitalism.