The Battle for Affordable Housing in the Bay Area 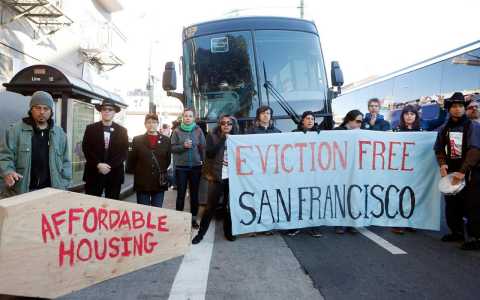 The San Francisco Bay Area appears to be enjoying a major economic boom. Mean economic growth is on the upswing, unemployment remains comparatively low, and mean earnings per household are also on the rise. Compared to the rest of the country, the Bay Area might seem to be a dream come true for the average worker—but in reality it has become a nightmare.

The real GDP of metropolitan San Francisco grew by 7.4% in 2012, more than double the growth of California or the country as a whole. With other sectors of the US economy stagnating or near collapse, US capitalism sees the information technology and electronics industry as a profitable and safe bet for investment. In Silicon Valley and San Francisco in particular, this has created a speculative bubble reminiscent of the “dot com” bubble of the late 1990s. Companies that in effect produce no real goods or even services have made their founders almost instant millionaires. This speculative boom has led to a dramatic increase in the cost of living, with skyrocketing rent prices, evictions, high food prices and low wages for the working class of the Bay Area.

As of February 2014, the unemployment rate of San Francisco-Oakland is at 6.0%, while Santa Clara-San Jose’s stands at 6.3%. In the rest of California unemployment hovers around 8.7%, with certain cities faring far worse, like Los Angeles at 11.3%, Modesto-Stockton at 13.0%, and Imperial County at a devastating 23.0%. This looks really good for the Bay Area—at least on paper. But the reality is that most of the jobs added have been in “tech.” For example, the City of San Francisco added a total of 27,600 jobs between 2012 and 2013; but approximately 15,000 of those jobs were directly or indirectly linked to the tech sector. The city of San Francisco experienced a 57% percent increase in technology jobs from 2010 to 2013; the County of Santa Clara, where Apple Inc. and Google Inc. are based, had an increase in tech employment of 14 percent. For those not in tech, the situation continues to be as grim as when the economic crisis began in 2008. Those unable to find a job in that sector or who are unemployed are being ruthlessly squeezed out by the exorbitant rent prices.

This recent boom in the tech industry has caused a substantial population increase in the Bay Area. The counties of San Francisco, San Mateo, and Santa Clara are now the fastest-growing in the state. A significant portion of these new arrivals are considerably wealthier than those already living here. This drives up rent prices sharply. San Francisco, the fourth-largest city in the state, far exceeds even New York City as the US city with the most expensive rents, averaging $2,363 for a one-bedroom apartment, according to the realty portal Trulia.

The average wage of a software developer in San Francisco, according to the Bureau of Labor Statistics, is $116,000; the average wage of a waiter or a janitor is $22,000. Landlords are very aware of this and are therefore able to charge these scandalous rent prices. These new transplants can afford the price increases, but most workers in the city simply cannot.

These conditions have led to an increasing number of evictions of working-class people, which are particularly hard on immigrants, youth, the disabled, and the elderly. In particular, Ellis Act evictions—evictions in which the owner then intends to sell the property—have increased 170% from March 2010 to February of 2013. The situation is probably a lot worse now. Landlords and realty companies have purposely allowed buildings to remain empty in order to drive rent prices even higher. Currently in San Francisco, approximately 1 in every 20 apartments remains empty. Such is the absurd logic of capitalism.

The growth in the technology industry is being fueled by tax breaks and privileges granted to these companies by local governments. The City of San Francisco has created payroll tax exclusion zones for tech companies, while increasing taxes on working people and cutting social services. The city councils of Cupertino and Mountain View have bent over backwards to accommodate the wishes of Apple and Google. The controversial shuttle buses that carry tech company personnel from their playground in the city to their jobs in Silicon Valley have been allowed to stay in San Francisco and the Peninsula, even though they are using public resources (such as bus stops and lanes) to benefit private companies. Up and down the bay, politicians pay lip service to the region’s “progressive values” while hashing out backroom deals with big business—including outright bribery and corruption. Two San Francisco city council members are awaiting trial after two separate FBI probes into corruption.

So far, there have only been small demonstrations by activists around the issues of evictions and the influence of big tech in the gentrification of certain neighborhoods. The reality is that the majority of the population still has illusions in the Democratic Party city council members. But experience will show that these politicians are in league with big business and against ordinary workers’ interests. This is why workers in the Bay Area need a party that truly represents our interests as workers: a labor party based on the unions, fighting for socialist policies.

We believe the rich should be made to pay for the crisis of capitalism—not the workers. A coalition of Bay Area city councils controlled by a labor party would bring the wealth of the speculators, billionaires, and the largest tech companies under public control and use it to improve the lives of the majority. It would dramatically raise the minimum wage and create tens of thousands of high-quality union jobs. It would lower rents, stop evictions, and launch a program to build thousands of affordable housing units. It would expand and improve service and lower prices for public transit. The Bay Area has long been a stronghold for organized labor; the BART strike that paralyzed the Bay Area in 2013 showed how strong unions continue be, not to mention the power of unions like the ILWU longshore workers, communication workers, nurses, teachers, construction, and more.

Of course, none of the fundamental problems confronting workers can be solved within the limits of the Bay Area or even the state of California. A statewide and nationwide struggle of the united workers against the bosses and their political parties will be necessary. The possibilities for transforming the Bay Area, California, the USA, and the entire planet into a true “paradise on earth” for the workers are endless; but under capitalism, things will only get worse.