Will the Real Millennials Please Stand Up?

In January, Buzzfeed published an article by Anne Helen Petersen titled “How Millennials Became The Burnout Generation.” The introduction included the obligatory clickbait-oriented phrase, “The answer is both more complex and far simpler than I expected.” Despite what at first appeared to be another run-of-the-mill article about the trials and tribulations of life as a millennial, the article struck a sensitive nerve.

Widely shared on social media and quickly referred to by nearly every other media outlet in one form or another, it presented an extremely relatable tale of life as a working-class millennial. It painted a picture of an economic system in terminal decline and the lengths that many millennials have gone in their attempt to match the quality of life their parents enjoyed.

The significance of this comes as millennials are now the largest generation in the workforce, making up 35%. The Brookings Institute expects that level to reach 75% by 2025. After years of talk from more conservative corners about the entitlement of “snowflake,” “lazy” Millennials, the stick is bending in the other direction to get us a bit closer to the truth. Leaving aside the reactionary idea that baby boomers are responsible for the poor economic conditions facing today’s youth, we can now frankly speak about how Millennials are facing lower wages and a higher cost of living than previous generations—a trend that has big implications for the political conclusions that this soon-to-be supermajority of the working class will draw.

In a seeming cultural obsession, countless films, television shows, articles, and more have tried to take up the question of the Millennial generation and its significance. The stereotype is that of a generation of smartly dressed college graduates who have moved to major metropolitan cities like New York, Los Angeles, Chicago, and San Francisco, who struggle with “adulting” when they aren’t glued to their desks at their 9-to-5 jobs at a new startup or tech firm, or brunching with their cohorts.

There is undoubtedly a degree of truth to this caricature. Some 40% of Millennials have college degrees, a higher number than any other generation in US history; many of the country’s biggest cities have seen a massive spike in the share of Millennial residents, and record-breaking low unemployment figures. However, this is only part of the truth.

We hear plenty about the impact of student debt on Millennials—averaging around $42,000. The skyrocketing cost of rent in the big cities is also well-documented—New York City’s average rent for a one-bedroom is approaching $3,000. However, we do not hear much about those Millennials who never attended college, don’t live in trendy cities or neighborhoods, are simply not working or who, at best, are working in extremely low-paying, part-time jobs. These Millennials, the majority of the generation, are unsurprisingly all but invisible to the writers (and readers, for that matter) of the New York Times, BuzzFeed, and the Washington Post. 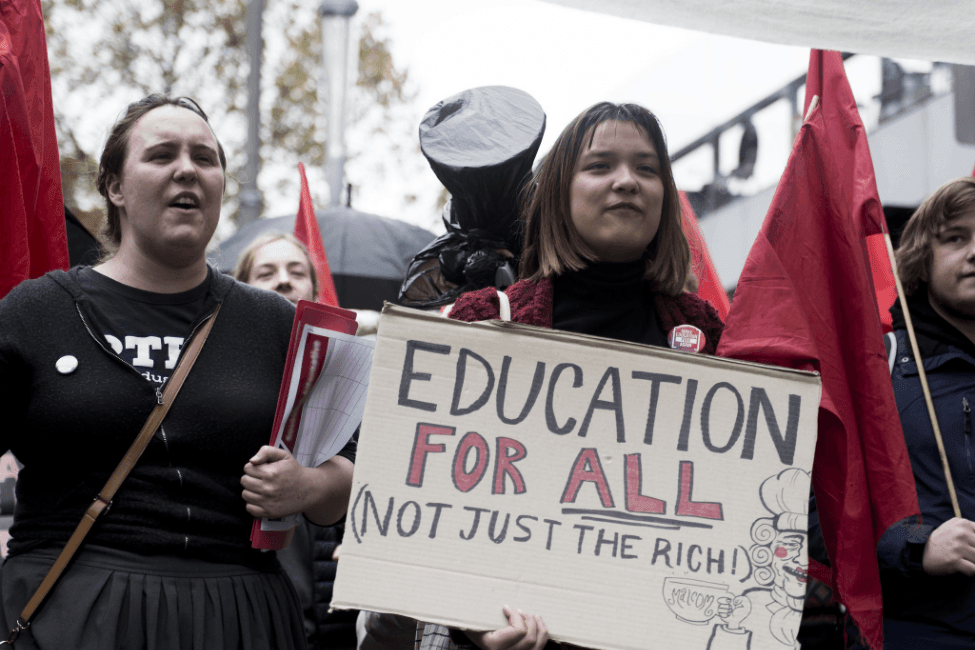 We hear plenty about the impact of student debt on Millennials, but we do not hear much about those Millennials who never attended college and are working low-paying, part-time jobs. / Image: Corey Oakley via Flickr (CC BY-NC-SA 2.0)

So who are the Millennials? 70% of the entire generation live in the suburban and rural parts of the country, and according to Zillow, nearly a quarter, 22.5%, of Millennials still live with their mothers. Of the 2.2 million Millennials living with their parents, a quarter are neither students nor employed. This is easily explained by the prohibitive cost of housing in every major city in the country and the concentration of jobs in those cities, condemning vast numbers of Millennials to enforced idleness.

As for those low unemployment figures, for starters, the statistics we usually encounter are the rosiest interpretations of unemployment, the Bureau of Labor Statistics’ U1 or U2 measures. These measures do not account for those who have given up on their job searches or those who are underemployed, i.e., working part-time but seeking full-time employment. The more accurate method used is the U6 measure, which stood at 7.3% in February. Compare that to the widely reported figure of 1.2%. Furthermore, the number of unemployed men aged 25–34 without a college degree has more than doubled since 1996, to 14%, nearly double the U6 unemployment figure. The underemployment rate for college graduates 22–27 rose in 2012 to an incredible 44%; almost half of that age group.

These figures contrast dramatically with the most common depictions of the generation as seen in Hollywood films. They also add another layer of generational nuance to the usual focus on full-time employed Millennials in big cities slaving away trying to find meaning in their barren and soulless careers.

As Petersen noted in her article on Millennial burnout: “Until or in lieu of a revolutionary overthrow of the capitalist system, how can we hope to lessen or prevent—instead of just temporarily stanch—burnout?” Moreover, as Michelle Goldberg wrote in her New York Times Op-Ed, “No Wonder Millennials Hate Capitalism”: “You don’t have to want to abolish capitalism to understand why the prospect is tempting to a generation that’s being robbed.”

In the final analysis, conditions determine consciousness—and capitalism can’t deliver. This explains the massive interest in socialism. From the big cities to the small towns, from the rust belt to Williamsburg, the impact the Millennial generation will have on the future course of the class struggle should not be understated. Because as Lenin pointed out, “he who has the youth, has the future!”

The Economy
Registration is disabled.