California’s Megadrought and the Fight for Socialism 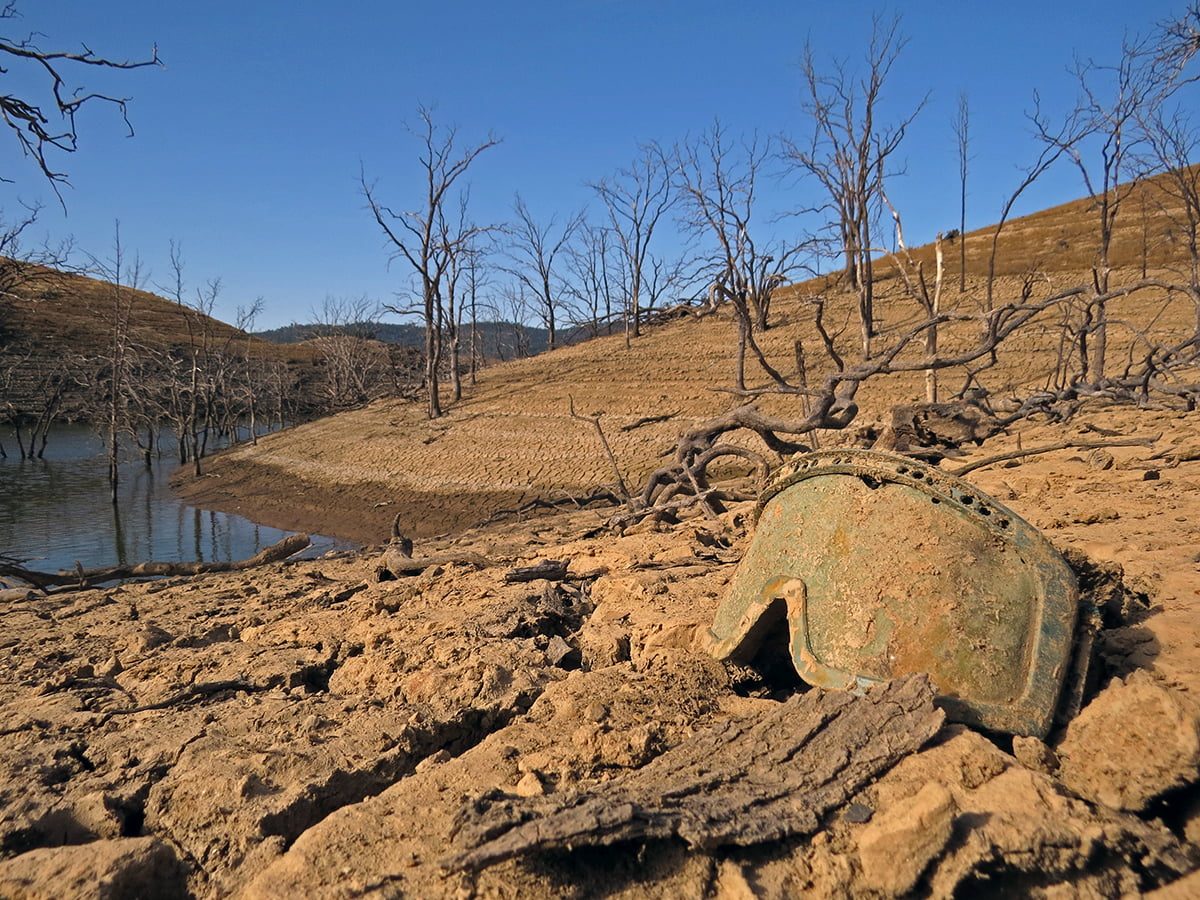 The history of California in the capitalist era is as mythic as the American Dream itself. From around the world, countless workers have emigrated to the “Golden State” in search of a better life. The exploitation of their labor, coupled with the region’s enormous natural resources, has turned California into an economic powerhouse. California’s share of US GDP is around 15%, nearly twice that of the second most significant contributor, Texas. While places like Hollywood and Venice Beach are known worldwide for their cultural significance, California renders immense services to world capitalism as a finance, real estate, and technology hub. Were it an independent country, the state would be the fifth-largest economy in the world, ahead of the UK, India, and France.

California is also an agricultural region of global significance—a veritable “land of milk and honey.” It provides two-thirds of the US’s fruits and nuts, over a third of its vegetables, 80% of the world’s almonds, and is the world’s fourth-largest wine producer. Overall, the state’s agricultural bounty includes more than 400 commodities. If California were a sovereign nation, it would rank in the top ten of countries globally for output in food production.

Cyclical shifts in climate are a problem humanity has contended with before, with nature exacting a heavy price from the populations involved. Today, the technology and productive capacity exist to liberate humanity from a precarious existence at the mercy of nature. But capitalism turns this promise on its head and limits human potential, particularly when it comes to building a sustainable future. The capacity for a world of superabundance is shackled to the market’s chaos and distorted by the profit motive. Capitalism continually creates crises of its own while exacerbating the problems nature itself throws at us.

In California, the combination of anthropogenically accelerated climate change and a natural, cyclical centennial-scale climatic event has brought on the worst “megadrought” in over 400 years. Through a study of tree rings in species with centuries-long lifespans, scientists have been able to piece together a picture of the extreme climate cycles that are endemic to the region. The most recent period of exceptional drought, from 2014–2017, had widespread cultural, political, and economic effects throughout the country. The potentially disastrous scale of the current megadrought, which began in the mid-2000s, is shown in the fact that the previous cycle lasted from 1575–1603—nearly three decades of desiccation—well before the human-driven increase in extreme weather events. This does not bode well for our future under capitalism.

As a key “breadbasket” region for our entire society, the failure of California agriculture would have a crippling effect throughout both the national and world economies, placing the livelihoods of tens of millions at risk and threatening our food supply. Unfortunately, this is precisely the scenario we are facing. The ongoing megadrought now afflicts 77% of the Western US. The effects of the drought have been widespread and nonlinear. A potentially catastrophic array of feedback loops based on current water usage and conservation practices in California is in the cards. Under a rational system, the worst effects could be mitigated. However, for-profit agriculture is dead set on further intensifying these contradictions.

Wildfires are a cyclical constant in the Western United States. However, climate change has accelerated their occurrence and severity. Dryness from a lack of precipitation, loss of biodiversity, and even a rise in the number of lightning strikes aggravate the frequency, duration, and severity of fires. Further, California’s aging energy infrastructure and cost-cutting shortcuts have led to the most destructive fires on record in recent years.

Despite being among the regions most susceptible to drought, California remains more consumptive and reliant on freshwater than any other state for manufacturing, power generation, public usage, and primarily, industrial agriculture. The loss of biodiversity due to climatic shifts beyond what native species can withstand is likely to change California’s landscape dramatically. In the coming years, we may see grasslands turn to deserts, blown-out and dried-up rivers and streams, and continually receding reservoirs in place of lakes.

Even under relatively temperate conditions, California has always been excessively dependent on irrigation and the transport of water across vast distances for most of its agriculture. Despite the media’s focus on individual conservation efforts—such as taking fewer showers and collecting rainwater—the overwhelming majority of freshwater consumed in the state goes towards agricultural and environmental purposes.

Under conditions of creeping desertification, the current practices are unsustainable. Continued access to potable water across the state is under threat, and many areas may not only become non-arable but entirely inhospitable for humans altogether. California farms, operating for profit and without regard to a long-term plan of production for need and sustainability, frequently rely on groundwater pumping to maintain crops. Under current drought conditions, where freshwater availability is 30–70% of the non-drought average, this puts even more pressure on the water system. Groundwater pumping draws from aquifers—layers of porous rock between non-permeable layers that hold water. Once drained of water, or nearly so, aquifers become compacted, collapsing in on themselves and permanently limiting the region’s freshwater capacity.

The San Joaquin Delta provides for the irrigation of four million acres of surrounding farmland. From here, it is diverted south, where it provides two-thirds of fresh water for the entire state. The Delta’s management is a testament to the shortsighted and irrational use of natural resources in a capitalist economy. Unsustainable irrigation has led to subsidence, or “sinking in,” of entire portions of California’s Central Valley by more than 20 feet.

As the land subsides, some portions of the valley have fallen below sea level. The outflow of freshwater from the delta is reduced by drought and aggressive irrigation. Saltwater from the San Francisco Bay estuary flows progressively further inland. As sea levels rise, this effect will be amplified, with saltwater intrusion penetrating deeper into the state and transforming surrounding habitats.

Under capitalism, the fallout from these converging factors will be disastrous. Nearly 70% of all Californians who live in coastal regions will experience increased flooding, worsening smog, heat waves, invasive pest species, and extreme weather events. Prices for many agricultural goods could skyrocket worldwide, with the market potentially taking decades or more to compensate for California’s drop in production. Those further inland will not fare much better. More than 25% of Californians live in wildfire risk zones. These millions are threatened not only by the damage and loss that accompany wildfires but also by the hazardous air filling their lungs with smoke and particulate matter.

Policy initiatives purportedly aimed at alleviating the worst effects of climate change are being increasingly exposed as the largely symbolic gestures that they are. Initiatives to retrain workers from the fossil fuel industry as green energy workers remain chronically underfunded. And studies that advocate the replacement of water-intensive cash crops with grains more appropriate to the historic drought fall on deaf ears.

California’s cap-and-trade system—a so-called “carbon market”—is another heinous example of ineffectual capitalist-driven climate policy. It creates an army of middle-men carbon brokers who produce nothing of value, offshoring emission reduction benefits through shell companies set up out of state. This allows companies to buy and sell the “right” to pollute and does nothing to address the totality of the problem.

But California is not an agricultural and manufacturing powerhouse in the abstract—millions of workers produce all of that wealth. The state is a highly urbanized population center with more residents than the whole of Canada. Los Angeles and its surrounding counties is the second-largest metropolitan area in the country, with an estimated 13 million people.

California has already proven vulnerable to rising temperatures and other causes and effects of the drought. Last year, the state experienced its first rolling blackout in 20 years. Apocalyptic scenes flooded the media as residents crammed into “cooling zones” amidst statewide wildfires and a global pandemic. Faced with rising temperatures, the bourgeois-liberal solution to avoid blackouts is to increase electricity prices to minimize air conditioner usage. In other words, the capitalist solution is to shift the burden onto workers.

Climate change has the potential to upend urban existence in California. Projected sea-level rises will erode the coastline of the state, changing the map and submerging several areas altogether. The profit-motive-driven logic of capitalism sharply contradicts the level of planning required to address these coming changes.

Any disruption to California’s urban economy could be calamitous for the world economy. As the technology center of the world and a major financial hub, California drives much of the innovation on the world market and is a media powerhouse. If its cities are flooded as sea levels rise, these industries are unlikely to survive the exodus of workers. And in the shorter term, if the drought intensifies, the stability of urban life will likewise be undermined.

Despite the capitalists’ craven unwillingness to tackle climate change head-on, workers and young people are more supportive than ever of bold initiatives to alleviate and ameliorate its effects. Advances in technology point the way forward, but the pursuit of profit is an unyielding barrier to meaningful progress. At some point down the line, some desperate and severe measures may be adopted by the capitalists. But who will pay? How many millions will suffer displacement, unemployment, homelessness, ill health, and personal loss? Once the climate catastrophe has exacted its warlike privations from the working people of California, what will be left of the breadbasket for future generations to steward and develop?

Instead of leaving it up to the capitalists and their apologists to act decisively on climate change when it is convenient—read: profitable—for them to do so, workers and youth must act for ourselves.

The enormous productive capacity in California must be retooled to serve the interests of environmental stewardship while at the same time continuing to feed millions. Scientists and engineers can be redirected from for-profit industries into research aimed at reducing the environmental impact of agricultural and industrial production year after year.

We must fight for public ownership over the land, energy, and natural resources to bring the waste and profiteering that predominates under capitalism to heel. Since climate change in coastal areas across the globe all but guarantees displacement, we must use this public ownership to guarantee paid employment for every worker who requires relocation and retraining. The nationalization of big agriculture, tech, finance, manufacturing, and entertainment will allow the working class to rationally plan for the public health and wellbeing of the entire population, and not only in California.

Climate change is not going away—but capitalism must if we are to respond to it as seriously as the threat demands. Workers worldwide will bear the brunt of these challenges in the future—we must ensure that we are the ones in the driver’s seat if further catastrophes are to be prevented.

The environments we live in are an incredibly complex layering of natural systems, each one dependent on every other. Humanity is capable of understanding these systems and working in tandem with them, provided that we first understand and rationally organize our own society. But capitalism is beholden to national borders, blind market forces, and internal contradictions. Private ownership of the means of production is not the end-all-be-all for our species. It is a blunt and unreliable instrument for the production and distribution of resources and no longer has a place in mediating our delicate balance with the planet. Any serious attempt to adapt to and overcome a future of megadroughts, gigafires, and rising sea levels will require a democratically planned socialist economy. On this economic basis, and with a workers’ government in power, humanity could seamlessly implement the necessary transitions to ameliorate the worst effects of climate change. Capitalism threatens the very existence of our species and deserves to be overthrown. If humans are to have a future worthy of the name, it must be socialist!