Massive Participation in Greek General Strike: For Escalation, Not with Words but with Deeds! 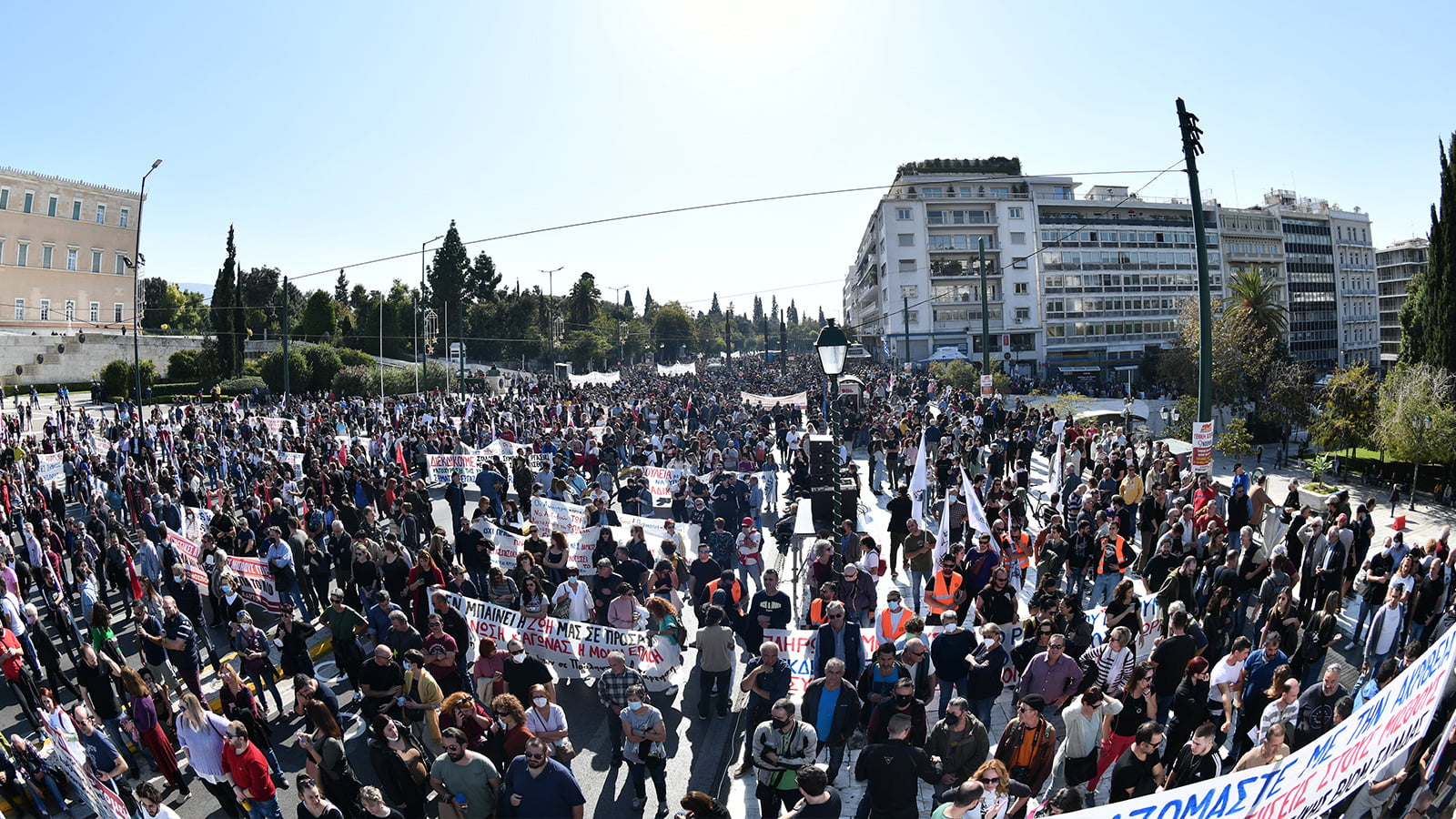 The following are some conclusions from the 24-hour general strike that took place in Greece on Wednesday, November 9. Our Greek comrades argue for the necessity of an immediate and well-prepared escalation of the struggle. Originally written on November 9th and published at www.marxismos.com.

The November 9 24-hour general strike by the GSEE (General Confederation of Workers of Greece—the confederation of the private sector workers) and ADEDY (Supreme Administration of Unions of Public Servants—the confederation of the public sector workers) against the ever-increasing tide of inflation represents a striking example of the power of the working class. This was the fourth consecutive 24-hour general strike in less than 18 months (with previous instances on October 6 2021, May 4 2022 and September 11 2022) and undoubtedly the biggest. With this great mobilization, it is clear that the labor movement, relatively slowly but surely, is now returning to the forefront of the mass struggle.

And all this, despite attempts by the government to terrorize the workers, as we saw in an attempted appeal to the courts yesterday to declare the public transport strike illegal, in a desperate effort to prevent the participation of workers in the demonstrations in Athens. In the end, however, over 50,000 protesters flooded the centre of the capital, with approximately two-thirds of them participating in the rally and demonstration organized by PAME (All-Workers Militant Front—the labor movement front of the Communist Party, the KKE).

In most of the mass workplaces of the public sector, and in some of their equivalents in the private sector, there was a large participation in the general strike, in most cases bigger than the previous one of April 6, and in some cases a lot bigger.

At the same time, once again, participation in the strike was very limited or non-existent in the largest part of the private sector, where there are no strong unions: in offices, in small and medium-sized production units, in all kinds of services, in most shops, and in cafes, where a very large part of the new generation of the working class is employed.

The reason for that is not only the fear for dismissals and reprisals from the bosses, but also the very great pressure on the workers’ living standards due to inflation, which is generally higher in the private sector, where wages are lower. The skepticism about participating in strike action in these workplaces is multiplied since there is no concrete plan of militant escalation that could lead the struggle to victory.

More generally, the masses’ morale and mood are decisively affected by the attitude adopted by the leaders of the trade unions and workers’ parties. Most workers have realized that, for many years, bureaucratic leaderships of the unions have been using 24-hour general strikes as “blank shots,” simply to register the workers’ discontent and let their members blow off steam, without showing even rudimentary determination to wage a serious struggle. At the same time, the workers are also disappointed by the attitude of their political leaders (SYRIZA, KKE), which do not take the necessary initiatives to get the anti-working class Mitsotakis government out of power as soon as possible. Nor do they present any program or policies capable of persuading the working class to make all necessary sacrifices to realize them.

However, despite and against the intentions and tactics of the trade union and political leadership, today’s general strike creates the most favorable possible ground for the workers and the trade union rank and file to demand, and attempt to force, the practical escalation of the struggle. This should start with a 48-hour general strike in early December, well-prepared for with assemblies and committees of struggle in all unions and workplaces. This must be combined with the creation of a mass united front, with the participation and joint action of all unions and mass parties supported by the working class, who declare that they support the demands of the labor movement (SYRIZA, KKE, MeRA25).

In our article preceding today’s strike, we already laid out the appropriate fighting demands against the great robbery carried out by all sections of the capitalists at the expense of the working class during this inflationary wave.

The working class has shown time and again that it wants to fight and has the power to immediately expel from power the reactionary and corrupt New Democracy government. Now it is the time to escalate the struggle, not with words, but with deeds, on the part of the mass organizations that claim to serve the workers’ interests. With unity of action of all those who want to fight, with a clear plan, with a determined struggle that will continue until the final victory!