No War But the Class War! 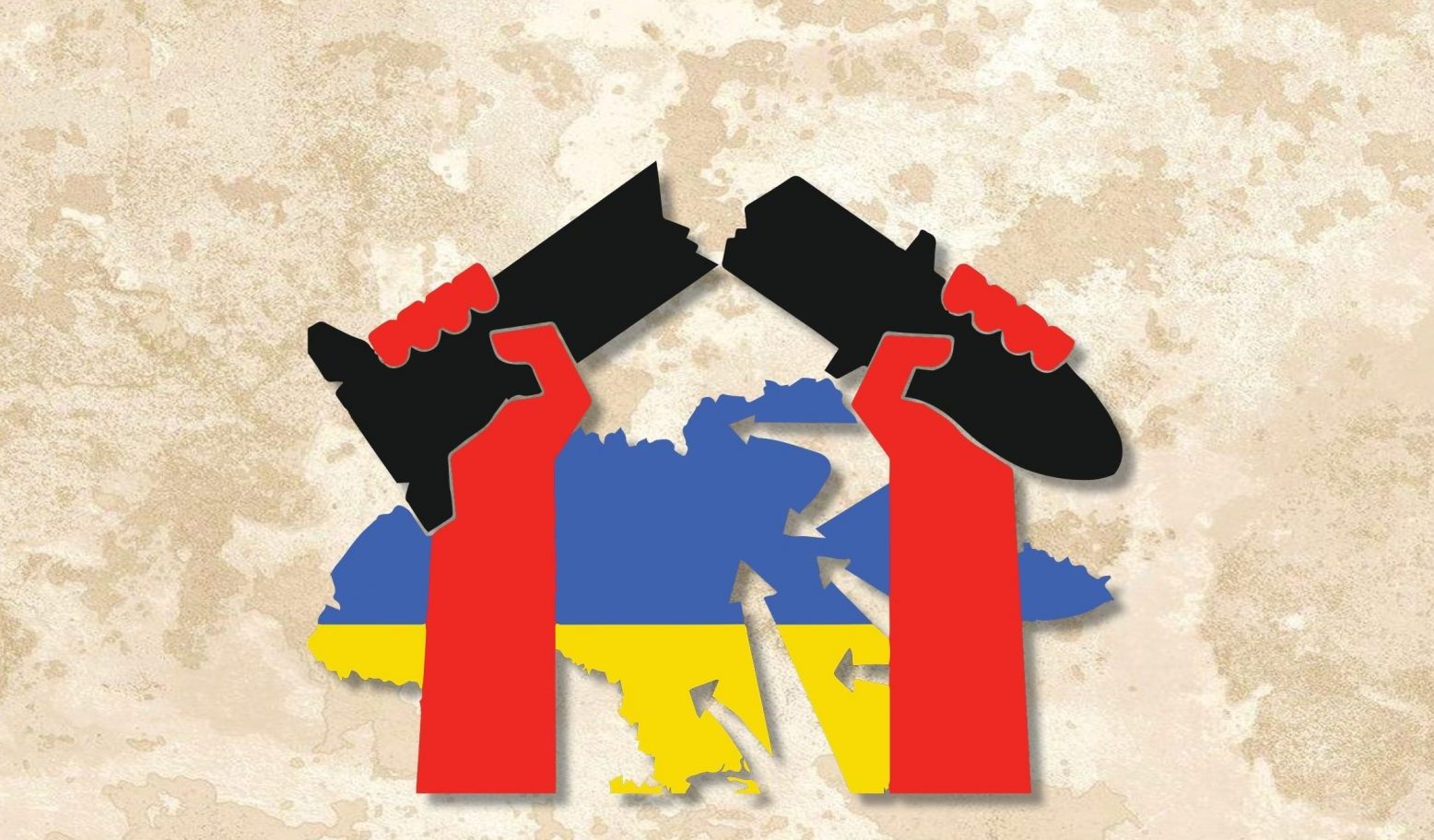 Editorial for issue 32 of Socialist Revolution magazine. Subscribe now to get your copy!

As the war in Ukraine drags into a new month, revolutionary Marxists must be crystal clear on the fundamental class dynamics of the situation. Lurking behind the lofty lies and rhetoric, the cruise missiles and the artillery, lie the class interests of the capitalists: the pursuit of markets, spheres of influence, natural resources, labor power, and profits. Put simply, war is the extension of politics by other means, foreign policy is an extension of domestic policy, and politics is concentrated economics.

Although the fundamental interests of the world’s capitalists are the same, they have no permanent allies, only permanent interests. In an all-too-real mashup of Squid Games and Risk, they play with the lives of billions as they recarve the world on the basis of the changing inter-imperialist balance of power. Under capitalism, competing companies form temporary cartels with one another when it suits them—only to break out in fierce competition when they sense the opportunity to seize upon a weakness. Likewise, relations between imperialist countries ebb and flow as they seek to gain directly or indirectly at the expense of their rivals. The war in Ukraine represents a particularly direct confrontation between groups of imperialist gangsters. But let’s not forget that 21 other countries are also currently in the throes of violence and civil war.

World relations are complex and nonlinear, and wars can break out for many reasons. In the case of Ukraine, the US and NATO pushed Zelensky to play chicken with Putin, and he called their bluff. The workers of Ukraine, Russia, and beyond must now bear the consequences of this reactionary proxy war. To be sure, most wars are waged in the name of “freedom” of one kind or another. But in the final analysis, the profit motive drives the actions of the capitalists. The capitalists are gamblers by nature, and they never waste a crisis or allow a war to interfere with their pursuit of profit. As Lenin explained, war isn’t only terrible—it is terribly profitable.

Even before the war in Ukraine, sales of weapons and military services by the world’s 100 biggest arms companies hit a record $531 billion in 2020, a 17% increase from 2015. Forty-one US companies alone, which included the top-five companies worldwide, accounted for $285 billion, or 54%.

The Biden administration has earmarked billions to provide military assistance to Ukraine. According to Politico, this includes “800 more Stinger anti-aircraft systems, 2,000 anti-armor Javelins, 1,000 light anti-armor weapons, and 6,000 AT-4 anti-armor systems.” Hundreds of small arms and millions of rounds of ammunition are also being sent. Generous as always when it comes to the military-industrial complex, Congress granted the Pentagon $3.5 billion in March alone to help replace thousands of missiles sent to Ukraine from European and American stockpiles. According to Chloe Lemarie, sector analyst at Jefferies International Ltd. in Paris, spending on military equipment could rise as much as 50% over the next five years, including a significant rise in orders in 2022.

Where does all this exploding scrap metal come from? It certainly doesn’t grow on trees. In practice, “replacing” these missiles means using workers’ tax money to sign highly lucrative contracts with private companies to manufacture weapons of destruction. As an example, Poland wants to buy 250 Abrams battle tanks and associated equipment at the cost of $6 billion. But since the generals in Washington don’t actually produce any tanks, the Pentagon and the State Department brokered the deal with General Dynamics. A win-win for everyone—except for the working class.

With war on the horizon, stock prices for companies like Raytheon, Northrop Grumman, and Lockheed Martin rose sharply in the lead up to open hostilities. Shares for some “defense” companies jumped nearly 7% on the day shooting began.

Needless to say, the crude cynicism of the US ruling class and swathes of its political apologists knows no bounds. When the war began, Republican Rep. John Rutherford of Florida tweeted: “What we’re seeing in Ukraine is the tragic consequence of an evil & aggressive dictatorship. Putin invaded a sovereign nation for no legitimate reason, & he must be held accountable. The US and our allies must impose the maximum possible sanctions & leave nothing off the table.” That same day, he purchased as much as $15,000 in Raytheon stock. Far from a conflict of interest, this perfectly expresses the harmony between the capitalists and their government.

Two years in the deadly shadow of COVID-19 has significantly altered life on earth. But the war in Ukraine may have an even more significant impact on the course of human history. It has blown apart the illusion of a peaceful return to a post-pandemic normality. In reality, the “new normal” is merely a return to the revolutionary and counterrevolutionary ferment of 2019—further compounded by the pandemic and the accelerating climate catastrophe.

Larry Fink, the CEO of BlackRock, which manages $10 trillion in assets worldwide, has declared that “the Russian invasion of Ukraine has put an end to the globalization we have experienced over the last three decades.” He predicts that Russia’s resulting isolation will “prompt companies and governments worldwide to reevaluate their dependencies and reanalyze their manufacturing and assembly footprints.” This has colossal implications, not only for Russia, but above all for US imperialism’s chief strategic rival: China.

Echoing the analysis of the Marxists, Mark Carney, the former head of the Bank of England, has said that “the long era of low inflation, suppressed volatility, and easy financial conditions is ending. It is being replaced by more challenging macro-dynamics in which supply shocks are as important as demand shocks. The pandemic marks a pivot. The bigger story is actually the war. That is crystallizing—reinforcing—a process of de-globalization that had begun.”

Globalization was the lifeblood of capitalism for an entire historical period. Combined with an unprecedented expansion of credit and debt, it allowed the system to stretch far beyond its “natural” limits. Now, the engine of world capitalism is stalled and going into reverse—threatening to take us down with it. No wonder society is permeated by a profound crisis of confidence in the system’s institutions.

After the decades-long bankruptcy and humiliation of the war in Afghanistan, Americans have no taste for foreign adventures. Biden’s absurd bid to pose as a “peace president” in a war provoked by his policies has actually led to record low ratings. “Seven out of 10 Americans questioned in the new poll expressed low confidence in Biden’s ability to handle the ongoing conflict between Russia, Ukraine and other Western nations, the poll found, and 8 in 10 worry the tensions will result in higher gas prices for Americans and lead to nuclear war.”

In another symptom of the prevailing mood, the Quinnipiac University poll recently asked Americans: “What would you do if you were in the same position as Ukrainians are now, stay and fight or leave the country?” Only 55% of Americans said that they would rather fight to defend it than flee.

Tens of millions of Americans understand that this is not “their” country—but the country of the parasitic handful of exploiters that rules over it. As Warren Buffet so bluntly put it, “There’s class warfare, all right, but it’s my class, the rich class, that’s making war, and we’re winning.”

The workers make up the overwhelming majority of society, and our interests are diametrically opposed to the capitalists’. Without our labor, the system would grind to a halt. Those who produce the wealth of the world should determine how it is used. The only way to lift humanity out of the blood-stained cesspool of war, poverty, and crisis is to unite and fight for socialist revolution. Under the impact of great events, the workers of the world are learning this painful but necessary lesson.