Obama’s Visit to Cuba: A Spoonful of Sugar 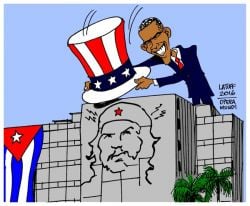 The Cuban people have shown remarkable courage and steadfastness in resisting all of the maneuvers of American imperialism and in defending the numerous gains of Cuban revolution—gains ranging from Cuba’s often praised medical system, to the literacy campaigns of the revolution’s early days, and, of course, the planned economy that made them possible.

It seems that the Cuban medical system is too efficient to allow the imperialist virus to gain any foothold by means of embargoes and CIA adventures. However, it is well-known that “a spoonful of sugar helps the medicine go down” , even if the “medicine” is imperialist snake-oil.

The snake-oil salesman in chief, Barack Obama, recently visited Cuba to peddle this unsavory product. The US President arrived in Cuba surround by the representatives of big business, ranging from Marriott CEO Arne Sorenson, to Major League Baseball Commissioner Rob Manfred, eager to exploit the opportunities created by a changing US policy and their presence exposes the true purpose of that policy shift. American imperialism has not changed its goal of reversing the political and economic gains of the Cuban revolution—the goal of imposing a US-friendly government and privatizing the potentially very profitable economy. Under the pressure of multinational corporations, salivating at the thought of profitable trade deals and untapped Cuban markets, the American bourgeois has begun to shift towards a policy of undermining the Cuban revolution by economic engagement. Trade with American corporations would put pressure on the Cuban economy to adapt itself to the world market and would strengthen the capitulationist wing of the Cuban bureaucracy, which seeks to take Cuba down a “Chinese road”—sacrificing the economic gains of the revolution to secure their own political power and serving up the Cuban people on the altar of capitalism as raw material for exploitation in the hope of a little economic growth.

President Obama provides a cover for, and seeks to justify, this maneuver of American imperialism by denouncing human rights violations in Cuba. Charges of this nature coming from the US seem hypocritical in the extreme when one considers the monstrous behavior US imperialism routinely engages in around the world. Of course, such violations do occur on the island, most notably at the US’s Guantanamo Bay detention center.

Consider the absurdity of a US President visiting the Plaza of the Revolution to pay tribute to Cuban revolutionary José Martí and Cuba’s heroic struggle for self-determination. From the very beginning of US imperialism’s involvement in Cuba the aim was to subvert Cuban self-determination and establish American hegemony over the island. This was the aim of the Spanish-American War and the Platt Amendment, both of which were only broken by the Cuban revolution of 1959.

Even that hypocrisy, however, appears insignificant beside the supreme irony of the widely circulated photo of President Obama, the leader of the Western bourgeois and representative of American imperialism, standing in front of a mural of Che Guevara, a committed revolutionary and anti-imperialist.

It is entirely possible, of course, that a future US President, could attempt to reverse Obama’s easing of tensions. This stems both from disagreements within the American bourgeois over how to best achieve its objectives and from the fact that the US often has less a Cuba policy and more of a Florida policy as politicians accommodate themselves to the interests of the exiled Cuban bourgeois in order to win valuable electoral districts. However, the majority of the American bourgeois is increasingly turning away from this perspective and corporations hungry for a new source of profits will put pressure on any President to continue Obama’s strategy, making it increasingly likely that the US will fully normalize relations with Cuba in the near future.

While Marxists opposed the attempts of the US to blockade Cuba into submission and historically have demanded the abolition of the embargo, it is important to recognize that this change of tactics on the part of the American bourgeois is only the latest maneuver in its campaign to reverse all the economic gains of the Cuban revolution. It is also important to avoid falling into the trap of supporting one or the other imperialist party simply because it seeks to normalize relations in the interest of US corporations. Instead, Marxists oppose all attempts—whatever form they may take—of the American bourgeois to impose market capitalism on Cuba and defend the conquests of the revolution against these encroachments. Furthermore, Marxists recognize that the problems now facing the Cuban revolution stem from its isolation, a small island in the sea of world capitalism. In these conditions there are sections of the Cuban leadership which have embraced the so-called “Chinese model,” which would lead to capitalist restoration on the island.