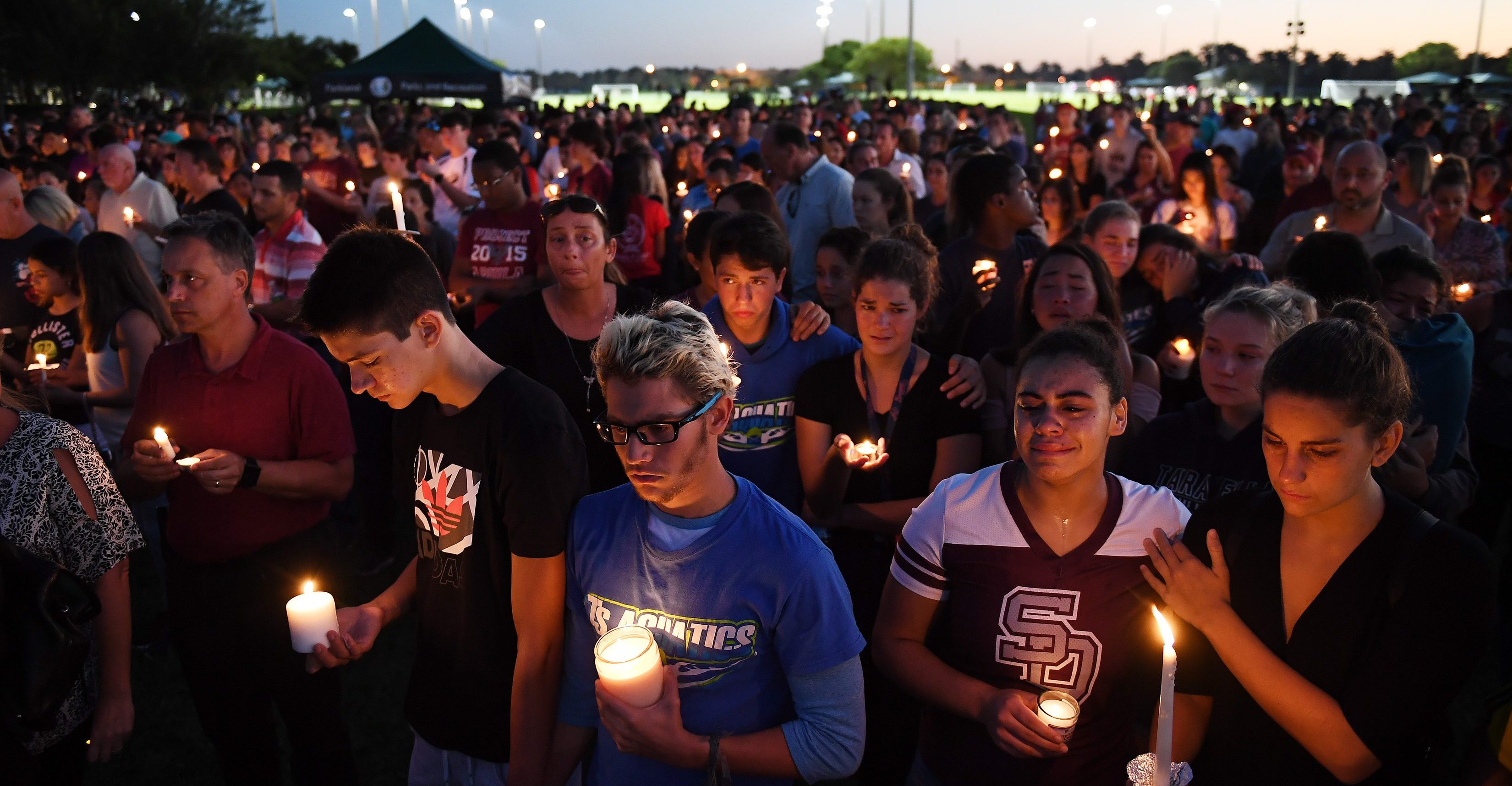 The horrific mass shooting at Stoneman Douglas High School in Parkland, Florida has yet again shocked and horrified the world. While politicians of both capitalist parties fall over themselves to frame the debate—either as an example of another isolated case of a disturbed individual with a mental illness, or as a grounds for a quick legislative solution in the form of tighter gun laws—Marxists see this tragic pattern first of all as a reflection of the social decay of a system that deserved to be overthrown long ago.

If the capitalist system was described in Lenin’s time as “horror without end,” a century later the historical contradiction facing humanity and the scale of distortion in human relations has only intensified to an immeasurably greater degree. The resulting levels of desperation, alienation, depression, mental illness, and countless other consequences of life under class society can only be eliminated by revolutionary measures that transform society at its root, by bringing the economy—including the arms industry and the regulation of their distribution—under the democratic control of a working class government.

As the first part of a continuing series of articles on this topic, we are republishing an article by Mark Rahman that analyzes this phenomenon in the wake of the school shooting at Sandy Hook Elementary School in Newtown, Connecticut in 2012. Since then, there have been over 1,600 mass shootings in the US.

The tragic shooting at Sandy Hook Elementary School in Newtown, Connecticut has prompted a public outcry and heartfelt mourning across the country. The gunman killed 26, including 20 young children, before turning the gun on himself. The media will surely be flooded with every minute detail of the killer’s life in the coming weeks, and the issue of gun control will once again come to the fore. But what will not be seriously discussed is the root cause of shootings like this, and why they have become so commonplace. It seems that only shootings with a high death toll get national coverage at all, as dozens of smaller incidents have just become “business as usual.”

Even before the identity of the shooter was known, questions were already being asked: How did this person attain firearms? Should this person have had the right to legally own firearms? Atrocities like the recent shootings in Oregon, Colorado, and Wisconsin have naturally prompted a national discussion on gun control.

There is, no doubt, good cause for concern. Since 1982, there have been at least 61 mass murders in the U.S. involving firearms, and in most of these cases, the guns were obtained legally. The United States ranks far ahead of any other nation in the world in crimes of this sort. Many are quick to point out that the U.S. also ranks highest in per-capita gun ownership, but other nations with similar gun laws and similar levels of gun ownership don’t seem to have such a high incidence of crimes of this sort.

Regardless of what the gun laws are, people who want firearms can acquire them—by illegal means if necessary. And if guns are unavailable, other weapons can be used to wreak havoc on society. Just hours before the shooting in Connecticut, there was a knife attack at a secondary school in China (where private gun ownership is outlawed), where 23, including many children, were wounded.

Is there something “wrong” with people in the United States that makes them prone to commit these types of atrocities? Michael Moore asked that question in Bowling for Columbine, though he failed to give an adequate answer. However, in his later films, SICKO, and Capitalism: A Love Story, which dealt with the health care system in the U.S., and the capitalist system itself, he came much closer to answering that question.

So what is it that is unique about the United States? For one, we don’t have a universal health care system to provide quality mental health facilities. Nearly 50 million Americans are without any type of health care whatsoever, and those that are insured often have very limited access. Mental health care in particular is often given short-shrift, as the insurance giants cut every corner possible to increase profits.

There are concrete reasons why the American labor movement failed to win universal health care, chief among them, the lack of an independent political party of the working class based on the trade unions, and the narrow policy of the trade union leaders in the 1930s and during the post-war boom, who fought for health benefits for their workers, instead of fighting for quality health care for all workers. But what does this have to do with the shooting in Connecticut?

The circumstances surrounding the gunman’s motivations have yet to surface, and perhaps will never be known. However, the discussion around how he obtained his weapons is far less important than discussing what leads people to commit these atrocities in the first place. Improved access to mental health care would go a long way toward preventing these kinds of incidents from happening.

For example, the expression “going postal” has its origins in a number of incidents at post offices starting in the early 80s, involving disgruntled employees who killed or attacked co-workers, supervisors, and others. In response to two events in 1993, the USPS created 85 positions for Workplace Environment Analysts, given the task of improving workplace conditions and thereby preventing violence. Presumably this worked as such incidents were greatly reduced, with just two on public record since then. However, in 2009, coinciding with the austerity attacks on the USPS generally, these positions were eliminated. Everyone can sympathize with anger and frustration at work, and while very few would carry out such rash acts of violence, there are now no services in place at the USPS to provide people with an outlet or a way to resolve these frustrations. In workplaces and schools around the country, cuts and austerity will inevitably lead to a dearth of such services.

Nationalizing the hospitals, pharmaceutical and medical machine industries, and the assets of the health insurance behemoths—to be democratically administered by the health industry workers and by the public as a whole—would lay the basis for the creation of a health care system that could provide everyone with quality care. Such health care would include counseling and therapy for all who seek or need it; from those suffering from minor workplace stresses, to those suffering from much worse. Removing the profit motive from health care would lead to a complete transformation in the way mental health is viewed and dealt with.

So what else is unique about the United States? Many people living in the U.S. long enjoyed a higher standard of living than most of the rest of the world. This, in part, contributed to the limited scope of our social safety net. Throughout the post-World War II boom, there was a blunting of the class struggle, as the pie was getting bigger, and the capitalists were able to give the working class a few extra crumbs, fearing a return of the mass movements of the 1930s and 1940s.

As a result, many of the reforms won by the labor movements of other countries simply don’t exist here for most workers—paid vacation time, maternity leave, universal health care, and so on. These reforms, although still extremely limited, provide a certain level of stability in many countries. The capitalist system can no longer provide crumbs like those won in the past, and internationally we see vicious attacks on these gains.

The ideology of “sink or swim” is perhaps strongest in the United States, where we are told to pull ourselves up by our own bootstraps (if you are fortunate enough to even have bootstraps!). We have been raised to believe that we have no one to blame for our problems but ourselves, and that we should look no further than in the mirror for someone to lend a hand. But as the capitalist crisis continues, many are rethinking these ideas, which have been relentlessly injected into society from above. Many are even rethinking the capitalist system as a whole. Increasingly, Americans are realizing that we are collectively suffering from the crisis of the system, and that we need a collective solution.

In place of the relative stability of the postwar period, and lacking many of the reforms that serve to keep the heads of those worst-off above water, we have a deteriorating standard of living and a state of complete precariousness for millions. With so many being backed into a desperate corner by the crisis of capitalism, what we are observing is a “fight or flight” reaction on the social level, expressed in an increase of acts of mass violence.

The Washington Post has reported that of the 11 deadliest shootings in history of the U.S., five have happened since 2007, the year that marked the beginning of what is now popularly referred to as “the Great Recession.” This is not an accident.

The official unemployment rate for those under 25 is 16%, and this doesn’t factor in underemployment. The cost of attending higher education is rising and the prospects for a decent life under capitalism are bleak for today’s youth. The gunman in Connecticut has been identified as Adam Lanza, age 20. In Colorado, it was James Eagan Holmes, 24; in Oregon, Jacob Tyler Roberts was 22. Whatever the direct motives or causes for these young men to commit such heinous crimes, it is clear that at root they are a reflection of the decay of the entire social system.

People worldwide are profoundly and justifiably saddened and outraged that so many innocent children and teachers have had their lives so senselessly snuffed out. President Obama himself had to hold back tears when speaking to the press about this incident. And yet, incidents of mass violence, rape, torture, and murder are the reality of daily life for millions of people around the planet, a reality that is very often a direct result of Obama’s foreign policy. With this horrific attack, the barbarism that stalks so much of the world has forced its way into the placid, affluent community of Newtown, a small town like so many others around the country. Nowhere is safe as capitalism sinks deeper and deeper into crisis, bringing with it ever more tragic consequences.

To end war, violence, and the constant instability of the system we must end capitalism!