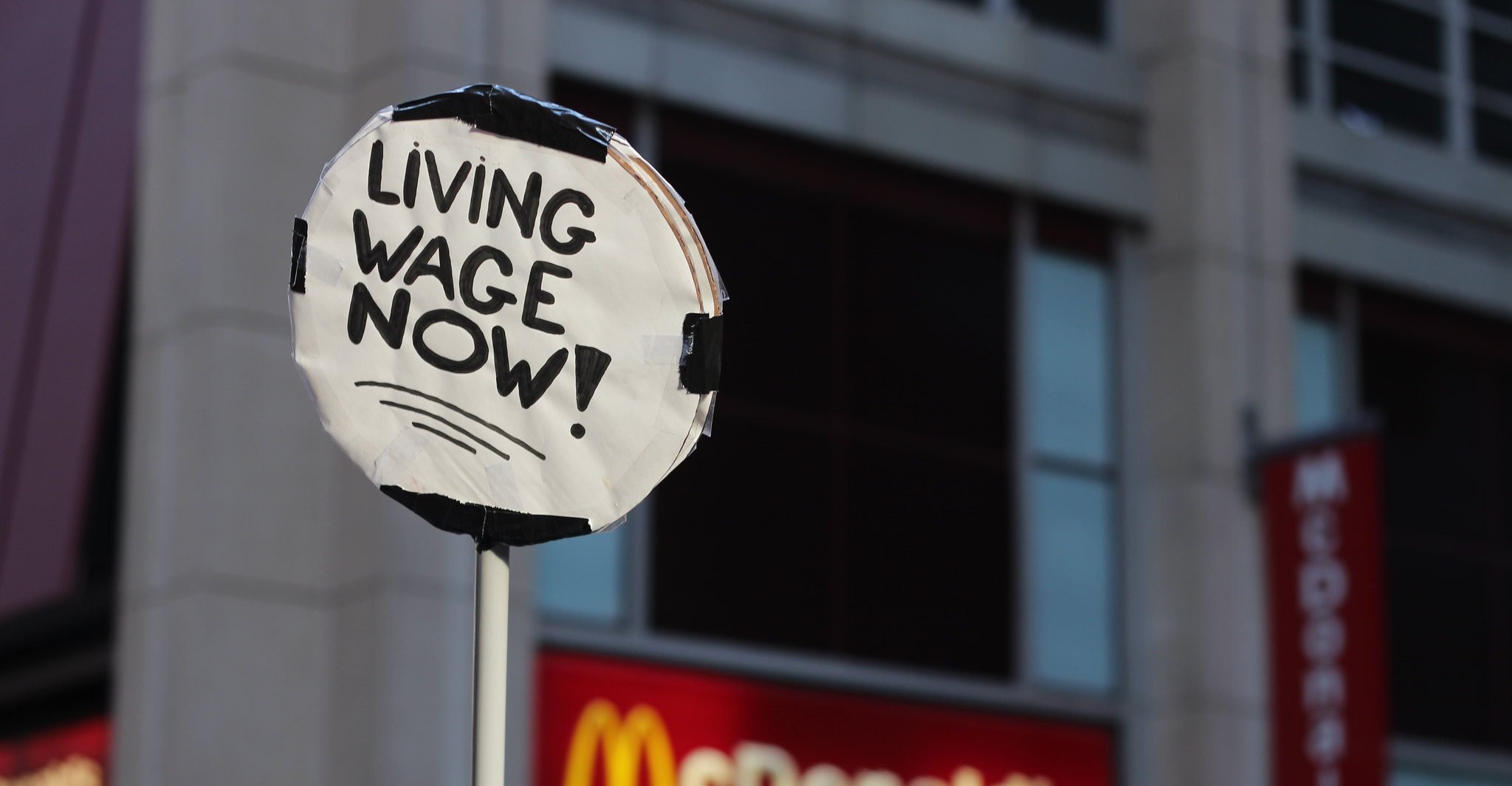 The national debate over the minimum wage has resurfaced yet again, centering on the idea of a $15 federal minimum wage. Having first emerged as a campaign launched by SEIU and taken up by activist groups roughly a decade ago, the call for a $15 federal minimum wage has now been adopted by many Democrats. The idea is also being taken more seriously by bourgeois economists and journalists, and Joe Biden included it in his campaign platform. And with the proposal supported by 59% of Americans, millions expect the new administration to deliver.

It is not surprising that the idea has seen increased interest over the past year. The cost of living has risen 20% since 2009 without a consequent rise in the federal minimum wage. At a time when the pandemic and economic downturn have provoked severe financial distress, 32 million Americans earn less than $15 per hour, and an estimated 40 million would see wage increases if the higher minimum wage was enacted.

The federal minimum wage was last raised to $7.25, in 2009, as the result of a piece of legislation signed by George W. Bush in 2007. Obama campaigned on raising it to $9.50 by 2011. But when the Democrats won the “trifecta” and controlled all wings of the federal government in 2009, they did nothing to act on this modest promise. In 2013, once they had lost control of the federal government, Obama regressively called on Congress to raise the minimum to $9.00 per hour.

Anger over the rising costs of living continued to grow in subsequent years, but the movement saw limited national discussion during the remainder of Obama’s presidency. Then, in 2016, Bernie Sanders’s presidential campaign provided a focal point for the millions of people who wanted a “political revolution against the billionaire class.” Sanders called for a $15 “living wage,” which at the time was dismissed as “pie-in-the-sky” by virtually every other prominent Democratic politician.

Since then, however, the class struggle has intensified even further. In response, the Fight for $15 has “broadened its coalition,” with the likes of Joe Biden, Nancy Pelosi, and Amazon now supporting the proposal. The latter raised their company-wide starting wage to $15 in 2018 and has run an ad campaign in recent months extolling the virtues of a $15 wage. This is undoubtedly an attempt to cut across the growing interest in unionization at the company and maintain its current sky-high public perception.

There are concrete reasons for this change. On the one hand, over the last period, individuals like Sanders and Alexandria Ocasio-Cortez have exposed the growing divide between those who control the Democratic Party and its voter base. Due to the structure and bourgeois class character of the party, this divide is ultimately unbridgeable within the confines of the Democrats. Nonetheless, many who feel compelled to vote Democrat for lack of a viable left alternative increasingly see a gulf between the “progressive” wing of the party and the “establishment.” To try to hold the “big tent” together, the party tops have been forced to adopt a few elements from the “progressive” agenda.

Additionally, the COVID-19 pandemic has exacerbated inequality even further, forcing the ruling class to confront the latter more directly. Promising “transformative” economic investment to “Build Back Better,” Biden and Co. seek to divert the simmering class anger into safe channels. The widely popular demand for a $15 minimum wage—which is already realized in many states and cities—is something they can now embrace as they seek to let off some of the accumulating societal steam.

This is primarily due to the fact that in the years since 2012, inflation diminished the purchasing power of $15. After adjusting for inflation, the “Fight for $15” has effectively become the fight for $13.13. This is even more striking in light of the fact that, if the minimum wage had kept pace with productivity gains, as it did from 1938 to 1968, it would now be $24. Thus, the demand for a wage that was already insufficient in 2012 is now even further from being for a genuine living wage. The Democrats bided their time for nine years—waiting until the demand had organically become weaker—before finally coming out in favor of it.

But supporting a demand in the abstract is not the same as actually fighting to make it a reality. The Democrats included the $15 minimum in the initial proposal for the recently passed stimulus bill, but the Senate parliamentarian—an unelected staffer—blocked it on the grounds that budget reconciliation did not permit the wage increase. As Vice President, Kamala Harris could have overridden this blockade, but she did not. With the tepid wage increase safely blocked by the threat of a Republican filibuster, Nancy Pelosi valiantly stated that “we will not give up on the fight for $15”—speaking on behalf of the party that currently controls the presidency and both houses of Congress! We cannot categorically rule out the possibility that, under pressure from below, the Democrats will eventually pass a wage increase—but it is pretty clear by what means the likes of Pelosi propose to “fight” for it.

Unfortunately, the self-described socialists in Congress did not make a serious effort to fight against the Democrats’ maneuvers throughout this process. Although Sanders pointed out the arcane and undemocratic nature of the parliamentarian ruling, he did not provide clarity on the question of inflation. Instead, he introduced a plan to phase in a $15 federal minimum wage by 2025—at which point inflation will have rendered the wage even more insufficient.

Alexandria Ocasio-Cortez correctly pointed out that $15 is already a deep compromise, but at the same time, she provided cover to the parliamentarian’s ruling, stating that she’d be fine if the wage increase was blocked by the parliamentarian—but not if other Democrats voted against it. Although eight Democrats in the Senate voted against the wage increase, Ocasio-Cortez voted for the bill anyway when it returned to the House. She later stated in a livestream that it is up to ordinary people and organizers to “hit up your senators” if they voted against including a wage increase. In a livestream, she reiterated that a $15 minimum is a compromise—but gave no substantial explanation for the passive role she and other “progressive” Democrats played in allowing the proposal to fail.

Ilhan Omar, when asked about critics from the left who argue that she and “the Squad” could have fought harder for the wage increase, simply evaded the question, blaming the Biden administration and emphasizing her assertion that the bill was the “most progressive policy in decades.”

A class-independent socialist in Congress would have called out the hypocrisy and cynicism of the Democrats, framing the question in clear class terms. Such a congressperson could have publicly refused to vote for the bill unless the Biden administration overruled the parliamentarian, allowing Biden and co. to either bend to pressure or expose the hollowness of their promises. By hitching their wagons to the cynical “realpolitik” of the Democrats, whether through caucusing or actual membership, Sanders, Ocasio-Cortez, Omar, and Co. are forced to try to square the circle and support “their” party.

Marxists support even the smallest reforms that would improve the conditions of the working class, and would be in favor of legislation that raised the federal minimum wage to $15. But we must be clear that for most workers, $15 is far from being a living wage. For example, in the New York-Newark area, one adult with no children would need to earn $20.00 per hour to cover basic expenses. Even in an “affordable” area such as Kansas City, two adults with two children would need to make $20.25 per hour to make a living wage.

The chaos and irrationality of capitalism mean that while our technological potential has skyrocketed over the past half-century, relative living standards have decreased. Productivity has more than doubled over the past 52 years, yet real wages have declined.

The working class must fight back! We cannot expect the representatives of our class enemies to give us anything without an all-out struggle. The labor movement needs to arm itself with a scientific understanding of wages and profit and mobilize the working class to secure its demands.