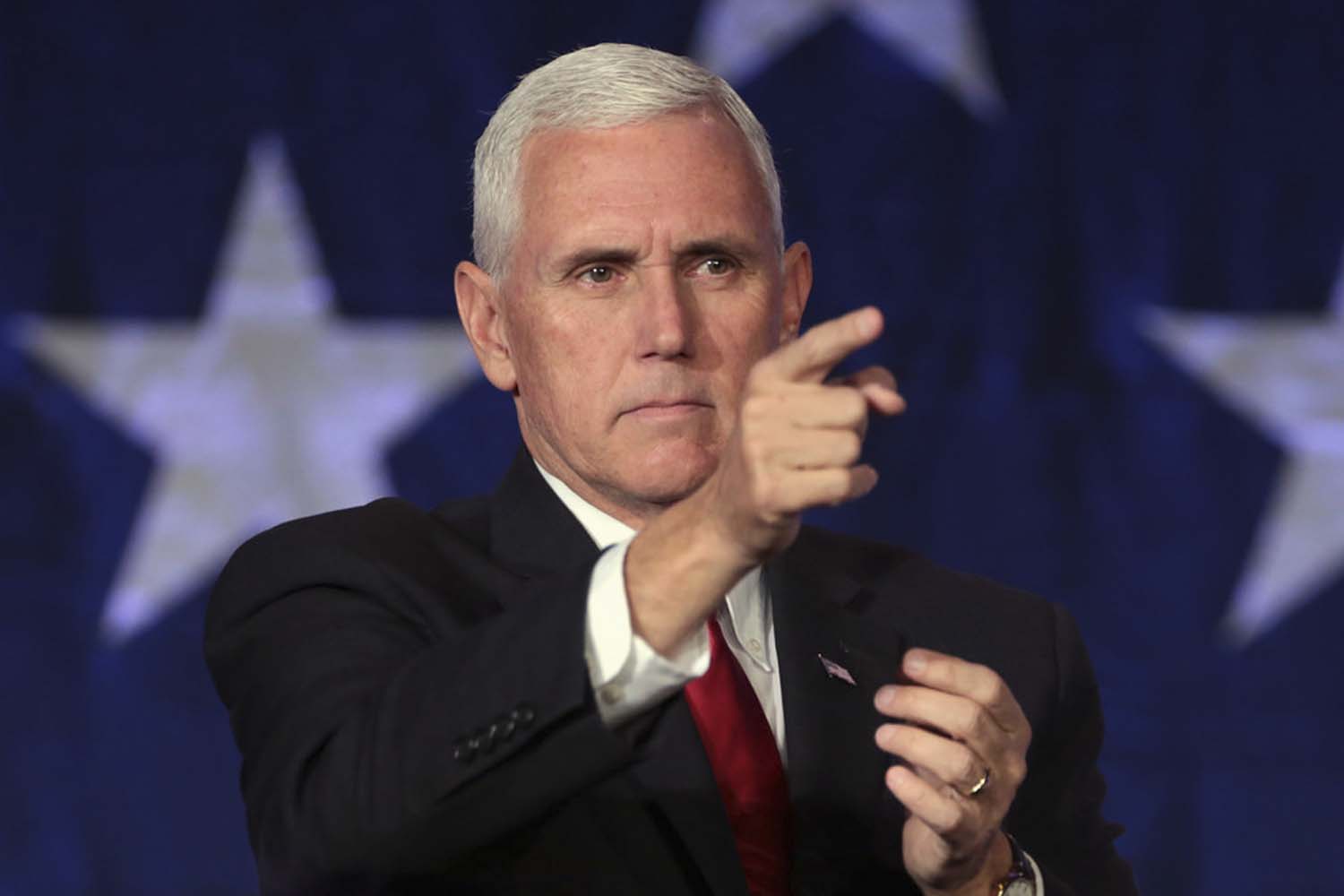 The ongoing attempt by Washington and the reactionary Venezuelan opposition to remove President Maduro will reach a key stage today. The opposition have called for mass protests and Mike Pence issued a public statement giving the green light for “regime change.” As we have explained before, in Venezuela, there is an ongoing attempt to remove president Maduro through a military coup instigated by Trump, Bolsonaro, Macri and Almagro.

On 10 January, the opposition-dominated National Assembly refused to recognize Maduro as president, calling him a “usurper,” and has said it is the only legitimate power in the country. The opposition is hinting at the president of the NA, Juan Guaidó, becoming the country’s interim president. Guaidó has called on the army to recognize him as such and break with the democratically elected Maduro.

The US has talked openly of a “transition to democracy,” and the National Assembly (which is in contempt of court since 2016) has passed a “law” saying that any army officers who break with the “dictator” will be given a full amnesty. The Supreme Court has now declared these decisions of the NA null and void.

On Monday 21 January, early in the morning, there was a mutiny of a number of National Guard officers, who were later disarmed and arrested. They attacked a couple of National Guard posts with the aim of obtaining weapons. This could be just a one-off incident or a reflection of a more widespread mood of discontent within the armed forces. It is to be noted that the mutineers were mainly low-ranking officers and from the National Guard, not the main body of the army. The government has reported that the guardsmen involved were intending to hand over their weapons to members of the opposition Voluntad Popular party.

The standoff with the guardsmen took place in Cotiza, a working-class barrio in the north of Caracas. Some of the local residents came out to protest against the government and set up burning barricades. Even if you factor in that opposition activists would have been actively promoting such protests, there are many genuine grievances in these and many other working-class areas, which have suffered the worst of the economic crisis. Particularly, many areas of Caracas have faced long periods of water cutoffs. 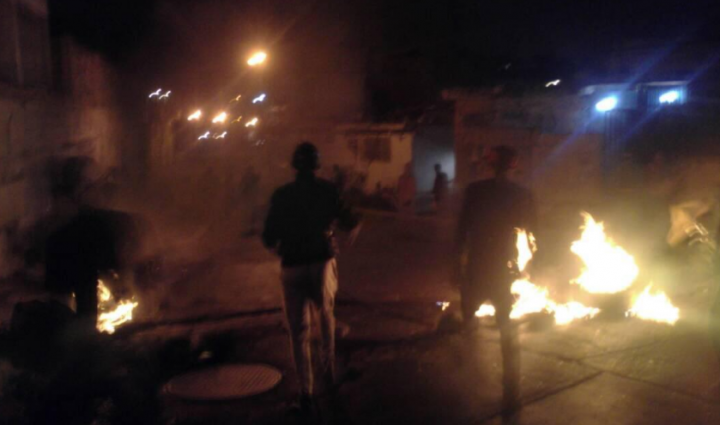 On Monday there were protests and burning barricades against the government in a number of working-class areas in Caracas that are normally chavista strongholds. / Image: anonymous

In the evening of the same day, there were protests, banging of pots and pans and burning barricades against the government in a number of places in Caracas. While the numbers involved were relatively small, significantly they mainly took place in working-class communities in the west of Caracas, which are traditional chavista strongholds, including in Carapita (Antímano), in barrios, in the areas of El Limón and Ciudad Caribia, on the road to La Guaria, etc.

If this means that the reactionary opposition is starting to connect with the grievances of working-class communities about water cutoffs, hyperinflation, low wages, etc., it would be a dangerous turning point. It remains to be seen if that is the case. The truth is that, since the last round of violent opposition protests, when they attempted to overthrow the government in 2017, the situation has only worsened in terms of the living conditions of working people and the poor. This is also impacted the lower ranks of the military, who face the same conditions. On top of that, since 2017, the government has made repeated promises to solve the economic situation, all of which have been broken. This has had dented confidence in the government’s ability among the ranks of chavismo.

The opposition has called for mass demonstrations today, 23 January, on the anniversary of the overthrow of the Perez Jiménez dictatorship in 1958. They are concentrating all their forces on this call. The aim is clear: to have a show of strength, which will bring the army to breaking point and force it to intervene to remove Maduro. Is that all? Perhaps not. Yesterday a number of people were arrested in Zulia in possession of weapons and military uniforms. The idea that the opposition or sections of it want to provoke an armed incident, which would justify or trigger a coup, is very feasible. This is, after all, what served as a prelude for the coup in April 2002, when snipers fired on opposition and pro-government demonstrators alike. The opposition blamed the government for “opening fire on unarmed demonstrators,” which was the cue for the military coup.

A statement yesterday by US Senator Marco Rubio (the leader of the most belligerent section of the US establishment against Cuba and Venezuela) seems to give credence to this scenario. He talked about plans by Venezuelan secret service SEBIN to fire upon opposition demonstrators:

As the good people of Venezuela make your voices heard tomorrow, on behalf of the American people, we say: estamos con ustedes. We are with you. We stand with you, and we will stay with you until Democracy is restored and you reclaim your birthright of Libertad. pic.twitter.com/ThzIAqBoRn

He is making it clear that the sole aim of this protests is the removal of the elected president and that the US will stand by those carrying out the plan (in fact, the US is a component part of the plotting). This is a scandalous state of affairs. Washington is openly giving instructions for the removal of a government in another sovereign country.

These are not just words. The US is seriously considering stepping up the economic sanctions that are strangling the Venezuelan economy. It might even implement a full oil embargo, which would cripple the government.

The leader of the most extreme faction of the Venezuelan opposition, María Corina Machado, yesterday said that “if Maduro wants to preserve his life he needs to recognize his time is up:”

Venezuelan opposition leader @MariaCorinaYA says if Maduro “wants to preserve HIS life, he should recognise that his time is up” – sounds like a death threat to me pic.twitter.com/k479I6JnCE

This is a direct death threat, which reveals the real character of the “democratic” opposition that counts on the full backing of the US and the EU.

The situation is therefore quite serious. It is clear that Washington and the reactionary opposition now see a window of opportunity and are prepared to go on the offensive until they achieve their main aim: the removal of Maduro one way or another. On the other hand, the EU has made an appeal for negotiations between the government and the opposition in order to solve the crisis. Let us not be fooled. Both Washington and Brussels want the same thing: to remove the president of the country by unconstitutional means. They might have slight differences about the methods, but they agree on the fundamentals.

The economic situation has deteriorated since the last coup attempt in 2017, coupled with the weight of a series of unfulfilled promises by the government to sort out the economic situation. Additionally, the government has used repression against workers struggling for rights and conditions. Most recently the protests of Agropatria workers in Cagua were met with repression by the national guard, and their leaders were arrested. The government has also not done anything to defend peasants struggling for agrarian reform, despite promises to the contrary.

Some have even said it doesn’t matter who wins as the living conditions of workers and peasants are already so bad. They delude themselves. If Washington has its way, it would be an even greater disaster for working people in Venezuela, even leaving aside the political impact in the region and beyond.

Our position remains the same: we do not support Maduro’s government, whose policies are undermining the gains of the Bolivarian Revolution and are unable to address the economic crisis. At the same time, we oppose with all means at our disposal the reactionary Trump-Bolsonaro-Almagro coup.

Marxists, labor movement activists and any consistent democrats have a duty to reject this ongoing coup attempt and defend the right of the people of Venezuela to decide their own future, free from imperialist meddling.